Report: Concern over the potential sale of the New York Eye and Ear Infirmary Last week the Post reported on the ongoing rumors about the sale of the New York Eye and Ear Infirmary at 218 Second Ave. and 13th Street.
"Worried doctors and staff members" told the paper's Steve Cuozzo that the circa-1902 building "might be sold and demolished for a new building."
The building, part of Mount Sinai Health System (and the location of a Marlon Brando scene from "The Godfather"), "is at the center of a three-way drama involving medical care, historic preservation and a potential real-estate windfall."
Per the Post:

In the interest of "streamlining" and reducing costs, Mount Sinai is gradually moving surgery, clinical, ambulatory and other departments to locations it has around Manhattan — a claim which Sinai did not dispute. Some doctors said the stealthy process will ruin the "synergy" of having all the functions in one spot and diminish patient care.

They fear that Mount Sinai will eventually empty the old building and an adjacent one built in the 1960s at 310 E. 14th St. to clear the way for a lucrative sale to a developer. One doctor who didn't want to be named said, "Mount Sinai is going to close this building and make whatever they can on it."

Earlier this spring, Village Preservation launched a campaign to request landmarking for the building.
According to the Post, a new building could have up to 210,000 square feet of floor area. Real-estate sources told the paper that the land could fetch in the neighborhood of $70 million.
Posted by Grieve at 8:00 AM 5 comments: 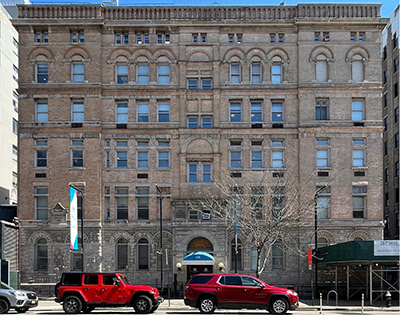 Preservationists are rallying to support the Eye and Ear Infirmary on Second Avenue at 13th Street.
Here's more via Village Preservation:

The historic Eye and Ear Infirmary ... is in danger of being lost forever. This striking building, which was built in stages between 1856 and 1903, with most of it dating to the 1890s, housed what is the oldest specialized hospital in the Western Hemisphere, founded in 1820 by two doctors known as the "fathers of American ophthalmology."
This institution became an icon of comprehensive and accessible care for the public, attracting Helen Keller to speak at the ribbon-cutting for the final stage of the building in 1903.

Unfortunately, the building’s fate is now clouded. It is being emptied of doctors and services as a move several blocks to the north is being contemplated. No matter what happens, this striking piece of our city’s history deserves to be spared from the wrecking ball.

This link has info on how to support the landmark designation of the infirmary.
Last summer, Mount Sinai Beth Israel officials announced that they were no longer pursuing the "$1 billion downtown transformation" that would have seen the creation of a new 7-story hospital on 13th Street between First Avenue and Second Avenue. This building appeared to exist among the new facilities.
Posted by Grieve at 5:00 AM 19 comments:

Optyx has closed at the New York Eye and Ear Infirmary 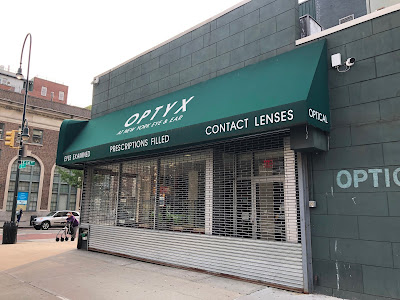 An EVG reader reported that Optyx, the eye-care center on 14th Street and Second Avenue, has not been open of late.

Sure enough, the shop is empty. An Optyx rep confirmed that this location had closed, but didn't provide any further information... 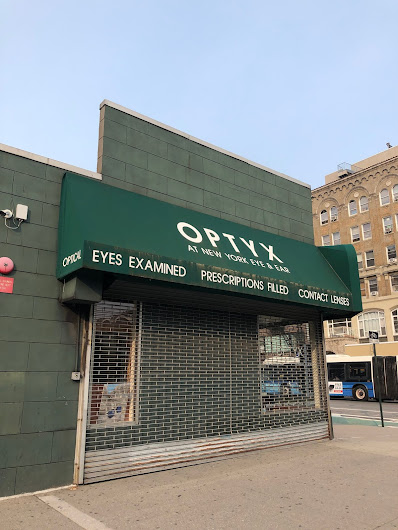 Optyx, with multiple NYC locations, was in the retail space of the New York Eye and Ear Infirmary of Mount Sinai. That facility is expected to be renovated at an unspecified future date. And there isn't any eyeglass storefront in renderings for the new-look building on 14th Street and Second Avenue... 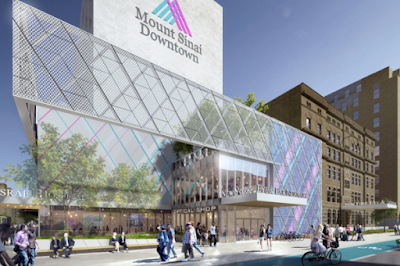 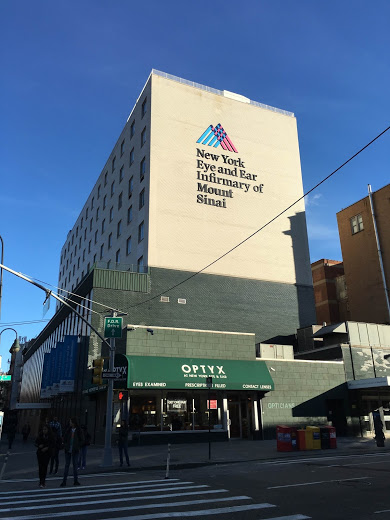 As previously reported in the fall of 2016, the Mount Sinai Health System is in the midst of its years-long project to rebuild Mount Sinai Beth Israel, transitioning to a network of smaller facilities throughout lower Manhattan.