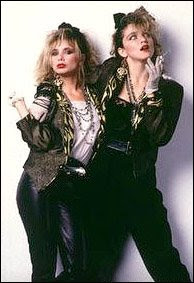 There's a free screening tonight of 1985's Desperately Seeking Susan at McCarren Park Pool in Greenpoint. It's a silly movie (stolen ancient Egyptian earrings! amnesia! mistaken identities!) that I enjoy watching every summer. (In fact, I just watched it Sunday night.) As Brian J. Dillard writes in his review at allmovie.com, "A classic Hollywood screwball comedy transposed to modern-day Manhattan, Desperately Seeking Susan offered mid-'80s moviegoers a mall-friendly version of hip New York style, much like Madonna did throughout her early musical career." Hmm, that's about right. I like it for a lot of reasons, such as seeing youngish John Turturro, Steven Wright and Giancarlo Esposito, among others, in small roles. And director Susan Seidelman rounded out the film with several downtown musicians/performers -- Richard Edson, Rockets Redglare, Richard Hell, John Lurie, Arto Lindsay, Ann Magnuson. And, of course, you get to see some mid-1980s New York, including several scenes in the East Village. (Nice, too, that many of these places are still around some 23 years later, including Gem Spa, Trash & Vaudeville, B & H Dairy and Love Saves the Day.)

Wacky Neighbor had a post on Susan's production design in September 2004. As he notes, the players behind the look of the film were Woody Allen regulars at the time.

Meanwhile, here are a few screenshots from Desperately Seeking Susan. 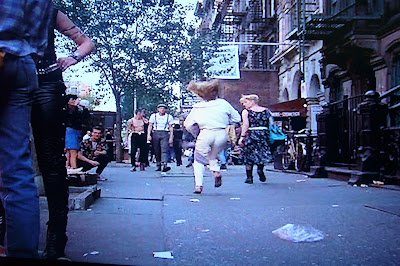 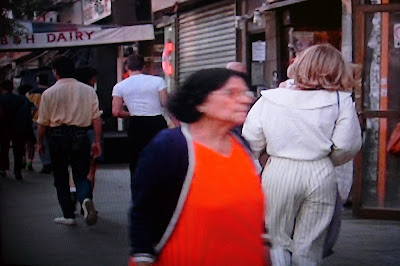 In front of Love Saves the Day. 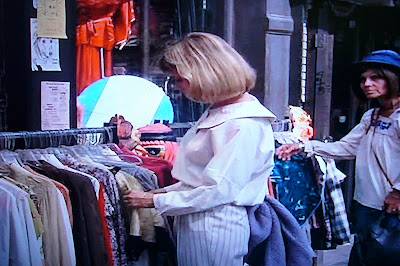 Ohhh! Don't mess with the guy with the bucket of the Colonel hanging around Second Avenue and 7th Street! 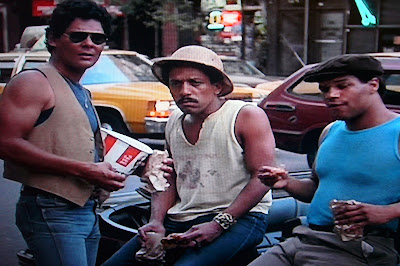 Scary clubgoers! Do all New Yorkers look like this?! 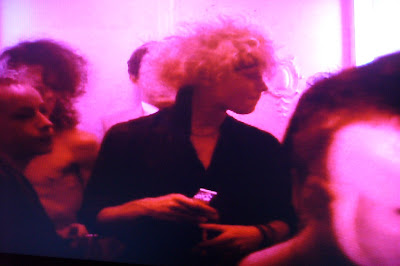 Outside the Magic Club. (In the film, the club is said to be on Broadway. According to Wikipedia, some of the interiors and exteriors were filmed in Harlem.) 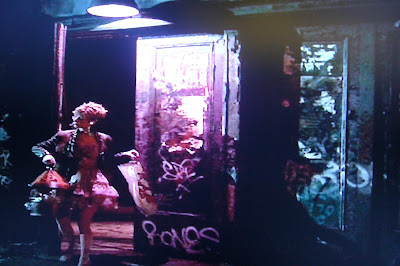 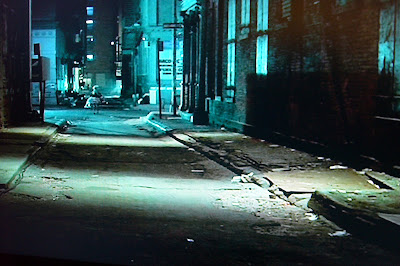 Now, some Desperately Seeking Susan trivia from Wikipedia, which means it may or may not be right:
* The filmakers had initially wanted Diane Keaton and Goldie Hawn to play the roles of Roberta and Susan. But the director decided to cast newcomers Rosanna Arquette and Madonna instead.
* Bruce Willis was up for the role of Dez. Melanie Griffith was up for the part of Susan as well.
* Madonna barely beat out Ellen Barkin to the part of Susan. Barkin was the producers first choice for the part, but the director claimed Barkin had a lack of substance.
* The Statue of Liberty can be seen in the film when it is still covered in scaffolding during its two year renovation.
* The DVD commentary track for the film (recorded in 1996) noted that after Madonna's first screen test, the producers asked her to take four weeks of acting lessons and get screen-tested again. Although the second screen test wasn't much of an improvement, the director still wanted her for the role, as much for her presence and sense of style as for anything else.
* The 1964 sci-fi movie The Time Travelers is playing in scenes 6 and 23 (melts at the end of the movie).
* The movie was originally filmed in the summer of 1984, early in Madonna's rise to popularity, and was intended to be an R-rated feature. However, following the success of the singer's 1984-85 hits "Like a Virgin" and "Material Girl," the film was trimmed in content by Orion Pictures in order to receive a PG-13 rating in order for Madonna's teenage fanbase to be able to see it
* The interior / exterior shots of The Magic Club were filmed in Harlem.
* Some of the scenes were filmed in Danceteria, a club that Madonna frequented and which gave her a start in the music business.

Previously on EV Grieve:
In case why you were wondering why some SATC fans are now into Richard Hell
Posted by Grieve at 7:09 AM

This nostalgia is too much, man. Should have also posted a video of
Into the Groove just to get us into the groove before watching the this movie again.

Just saw State of Grace (a great underrated film about the Irish mob; came out at the same time as Goodfellas, thus was overshadowed by the Scorcese film) on IFC the other day. That film got great scenes of the old Hell's Kitchen, and to quote one of the characters, Jackie Flannery (Gary Oldman): "They don't even want to call it "Hell's Kitchen" no more. Renamed it "Clinton". . There was also a good scene where Jackie Flannery and Terry Noonan (Sean Penn) burning a building that the yuppies just purchased; and Gary Oldman went on a diatribe on how the yuppies have destroyed Hell's Kitchen. I couldn't find a clip on that one, but here's a trailer of State of Grace.

Hi John. Good call on State of Grace! I haven't watched that in a few years. I recall a scene at the Old Town, too, in which Ed Harris and company break up the joint.

Or Sleepers where they kill Kevin Bacon in McHales.

Re: Madonna. She banged my best friend in high school. She used to troll around the east village in a limo and pick up latino guys. I was pissed 'cause (a) I'm not latino and (b) therefore I didn't get to eff Madonna.