An EV Grieve editorial (aka, this week's sign of the Apocalypse) 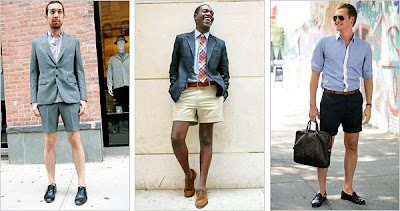 According to the Times today, shorts are no longer "an office don't. These days, they are downright respectable" at the office.

"Shorts are no longer an office don't" -- OH YES THEY ARE.

"These days, they are downright respectable" at the office -- NO! NEVER! NEVER EVER.

That is all. Thank you.

Oh, if you must, an excerpt from the article:

The willingness of men to expand the amount of skin they are inclined to display can be gauged by the short-sleeved shirts Senator Barack Obama has lately favored; the muscle T-shirts Anderson Cooper wears on CNN assignment; and the Armani billboard in which David Beckham, the soccer star, appears nearly nude.

Not a few designers are pushing men to expose more of the bodies that they have spent so much time perfecting at the gym. “We have all these self-imposed restrictions” about our dress, said Ben Clawson, the sales director for the designer Michael Bastian. “As men’s wear continues to evolve and becomes a little more casual without becoming grungy, it’s not impossible anymore to be dressed up in shorts.”

While Mr. Bastian is a designer of what essentially amounts to updates on preppy classics, even he has pushed for greater latitude in exposing men’s bodies to view.

[Photo: Elizabeth Lippman for The New York Times]
Posted by Grieve at 7:18 AM

Email ThisBlogThis!Share to TwitterShare to FacebookShare to Pinterest
Labels: shorts at the office, the apocalypse, Yunnies

Dear God. Next thing you know we'll be wearing Calvin Klein underwear (and yes it must be Calvin Klein, for Hanes or Fruit of the Loom would be considered an office don't), or bathing suits. Break out the suntan lotion; I'll be suntanning under the fluorescent lights.

Truly horrific! Another eyesore: the bow-legged yunnie guys in flip-flops, who think it's cool to wear ugly baggy shorts that stop at their knees with little ties at the bottoms. Guess their bad taste shouldn't be surprising considering what their yunnie counterparts are wearing. It makes one long for the Fall! (and I'm not only referring to the seasonal one)

Oops...left out: "....considering what their yunnie female counterparts are wearing."

This is what I'm gonna be wearing tomorrow -- it's casual Fridays, after all; I'll start the trend.

When will fig leaves make a comeback?

I'd like to say those pictures can't be real--but I know they're too stupid not to be.

I saw a fellow very similar to the ones pictured walking up Second Avenue last night around 6... I thought about taking his photo. Now I wish I would have...

Are these yunnie dudes also waxing their legs so their legs will appear smooth in these ridiculous short shorts? Judging by the photos, it sure looks that way. Apologies to anybody who's eating their lunch!

Anyone ever see "So Fine" with Ryan O'Neal? Thats what this reminds me of.