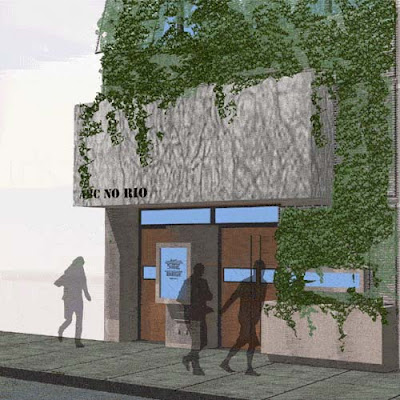 Wow. Had today been April 1, I'd be suspicious of that headline.

Anyway, to the Times:

Formed in 1980 after an art show on gentrification, ABC No Rio endured attempts by the Giuliani administration to evict it from its city-owned building on Rivington Street in the 1990s. So when the Department of Housing Preservation and Development decided in 2006 to turn the building over to the collective in exchange for $1 and an agreement that the group would make badly needed repairs, many saw the deal as a crucial step for the survival of a beloved local landmark.

Soon after the transfer, however, an architect determined that the building was beyond repair and would have to be replaced. The budget for the project soared to $2.4 million, from $700,000. And then fund-raising — never easy for a small organization run mainly by volunteers — became even more difficult as the economy declined. Housing officials became concerned that renovations did not begin as quickly as expected; others questioned the group’s ability to finance the expensive task of a new structure.

But much of the uncertainty vanished last week when the Manhattan borough president, Scott M. Stringer, and City Councilman Alan J. Gerson allocated $1.65 million for a new building.

Mr. Stringer arranged for a capital grant of $750,000, citing ABC No Rio’s resilience and cultural value.

ABC officials said they would likely demolish the Rivington Street building next spring. They have "designs for a one-story building with a basement that will extend farther back than the current structure and provide roughly the same amount of space."

For further reading:
ABC No Rio Web site
Posted by Grieve at 7:03 AM

See my NYC Rhymology post inspired by this... An off-rhyme, but one hell of a contrast. Thanks EVG.

Thanks for bringing attention to this story. It's good to see them get a leg up; nice to read some positive news for a change.

This is great news not only for ABC No Rio, but also for the whole community. Time’s Up Environmental Organization has been a long time supporter of ABC No Rio and always will be. Constant volunteers and community support has maintained the building and kept the vital programs up and running. Over the years they have continuously provided educational workshops, art and culture, and decades of local music for all and the youth.

Through our partnership with ABC No Rio, Time’s up holds bike workshops and meetings open to the community. Today we are hosting a woman’s bike repair class, a mailing party, and a prop and banner project to protect our water from toxic fracking solutions during gas drilling. If you’re in the area come and check it out at the ABC No Rio building. We are proud to be associated with ABC No Rio Community Center; it gives us all hope of real volunteer and community success stories.

We can save our community center’s, community gardens, and take back our streets. Don’t give up the fight, viva Charas Cultural Center.

So the original anti-gentrifiers are now gentrifiers themselves. Can't wait till the next time they want to speak out against real estate changes in the neighborhood. Talk about no moral authority. sad.

I will very much miss that ramshackle old building. It was very creaky and kind of scary 20 years ago and I'm sure it hasn't improved over time. It's been through several transformations over the years - every time i go in it seems somehow different. Except the bathroom, which is epic.