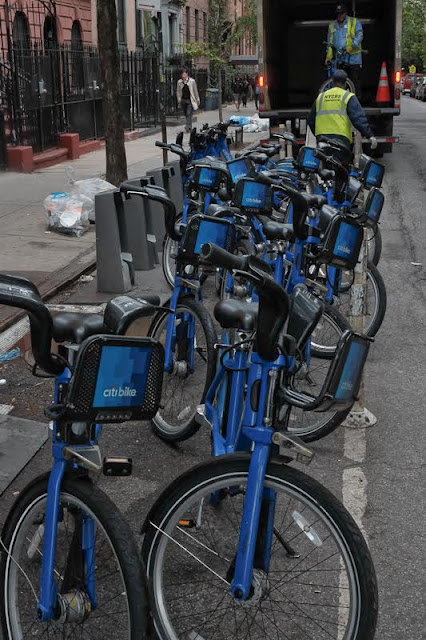 [Photo from June by Derek Berg]

More people are stealing Citi Bikes, according to the Post today.

The number of Citi Bikes stolen from docking stations and off the street has skyrocketed this year compared with 2014, with a 100 percent jump in Manhattan.

So far this year, 476 Citi Bikes have been stolen throughout the city, compared with 300 in 2014, an increase of nearly 60 percent.

There are also more bikes in circulation… anyway, according to Post:

Many riders fail to dock their bikes properly or leave them sitting on the street while they run an errand. And that’s when thieves most often strike.

“Some dope with a Citi Bike leaves it unattended while going into a store or something, and a perp comes up and steals it,” a police source said.

So, as a reminder, don't leave the bikes unattended. Or put them on a fence.
Posted by Grieve at 11:58 AM

Yet another reason to get rid of Citi Bikes.

I've seen teenagers walk down a whole line of bikes, testing whether they're unlocked and just riding off when they come loose. My question is, are these people re-selling the bikes? Taking them for a joyride? There can't be much of an after-market for CitiBikes.

I see people everyday testing the bikes at the 9th and C Citibike dock to see if any are not locked and stealable. Seems pretty ballsy but they don't seem to care or be hiding the fact that they are trying to steal a citibike. Middle of the day too. Not like it's dark and nobody is there to see them.
Not sure if they are trying to steal them to keep or just to get a free ride.

There is no way to tell if someone is riding a paid for or stolen city bike (or any other bike unless it's your bike). I don't see a solution to this and I guess there is still hope for NY after all.

If you want to see something funny... Just before after school time, sit somewhere where you can see a citibike parking thing. After school, kid after kid walk along and pull on the bikes to see if they are unlocked...

Why they say 476 bikes were stolen, I assume that means they never show up again, and not that people are pulling them of the dock without using a fob or whatever, riding them wherever, and then redocking them when they get there. Teenagers can be assholes, but they're also resourceful, and ciitbike with their facockded locking system that's moody and fickle isn't exactly helping the issue of stoke bikes. I'd doubt kids are reselling them, because there isn't much of a market for heavy bikes built like a tank. Those bikes aren't much fun to ride long distance.

The glee one might feel after acquiring a contraband Citibike probably dissipates in a matter of minutes.

Anyone want to laboriously power a 50 pound behemoth across town? Any takers? No? Then how about this elephant with three feet? Handles like a charm!

I've seen teenagers test whether bikes are loose frequently on 10th between A and B, on the north side of Tompkins Square. I tried telling a cop once, but the cop didn't care, saying that "they have cameras." What a liar. So I see that a few things have to happen:

I 'd expect that Citibikes would have GPS location transponders in their frames, for the sake of locating and identifying each bike, for reasons of administration and maintenance, not just in case of theft. Do they not?

Yesterday, I saw a man riding a bicycle type contraction with a dozen Citibikes on it - he was riding all around the periphery of Tompkins square park at 9pm last night.

Anon 7:28: It's possible they don't, no. They def know when and where you undock a bike, and when and where you redock the bike, but where the bike is and where it goes on it's trip I do not believe is identified. The ability to track the location of the bike live would be expensive.

Anon 7:52: That's one of the ways they move the bikes around from high traffic docking stations to those in the general vicinity that are not as popular.

When Citibike was about to be launched, of course one of the questions that NYers asked was, "woundn't they get stolen?" And the Department of Transportation Alternatives flat out lied, telling us that they all had GPS trackers.

Everyone sees kids taking free rides on the bikes. What's the problem? They're supposed to be "public transportation", right?

If the police wasted their time monitoring the citi bikes i would be very angry. That is not their problem.

Keep in mind Citi bank has nothing to do with this program anymore. One of the biggest investors is a Real Estate lobby. The program is unsustainable as is without the support of the RE lobby. I predict in 5 years there will be all these docks and the bikes will be long gone. It takes too much money and effort to keep this program going. the guys with the big groups of bikes are moving them back to where the came from. The flow of bikes is not bidirectional.

PS I grew up in NYC in the 70s and remember a lot of abandoned crap that people would be like back in the early 60s that used to be a cool thing but people stopped maintaining. I remember a group of kids coming to our local park and just unscrewed and hacked with a saw the slide and took it away...it took over 20 years for a side to come back to that park. maybe i'm just bitter.

I doubt Citibike will go away. DC has had the same bikes called Capitol Bikeshare for much longer than NY has had Citibike and it's still going strong.

Yes they all have GPS inside them So they are stolen in that the thief is taking a bike that they did not pay for . I assume the bikes are abandoned and not missing at all.