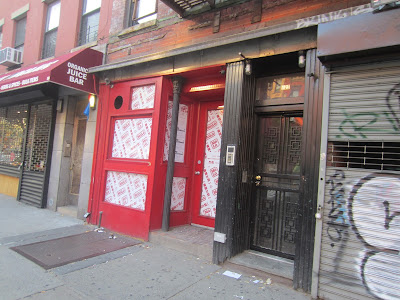 Been meaning to take a look at what's coming to 122 First Ave. between East Seventh Street and St. Mark's Place… the paper has been up in the windows noting a venture called the Málà Project … 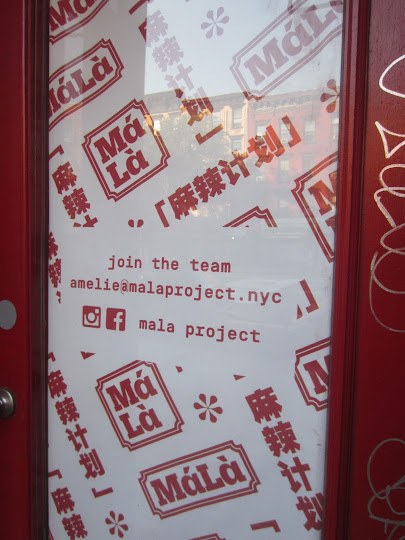 There's not much info on their Facebook page, except for: "An upbeat and energetic Chinese food shop, featuring traditional and exotic Chinese street foods in a playful setting."

The owners were on July's CB3 SLA committee docket for a beer-wine license. (No vote was necessary on this application.) Per their questionnaire (PDF!) on file at the CB3 website, they will offer "Chinese appetizers and entrees served family style."

Their listed hours are 11 a.m to 11 p.m. Sunday through Wednesday; until midnight Thursday-Sunday.

The previous tenant, South Brooklyn Pizza, closed in April 2014. Last fall, the owners of the International explored moving into the space, though those plans never materialized.

H/T EVG correspondent Steven
Posted by Grieve at 4:15 AM

Hi EVG,
have you heard anything about what's going on with the place on the other side of I-Bar, where Wechsler's used to be? I've seen some activity in there. Or at least people looking at the space.
PS: If I opened a Chinese Place down here, I would stay open very late. Especially on weekends. Bamboo House used to be very busy late nights.

becoming a hip block for asian food, what with xian famous foods, oiji, and now this!