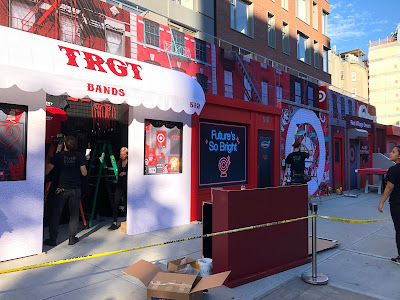 Workers are setting up for a sidewalk extravaganza outside the just-opened Target store on 14th Street and Avenue A... which includes a replica CBGB storefront — called TRGT... 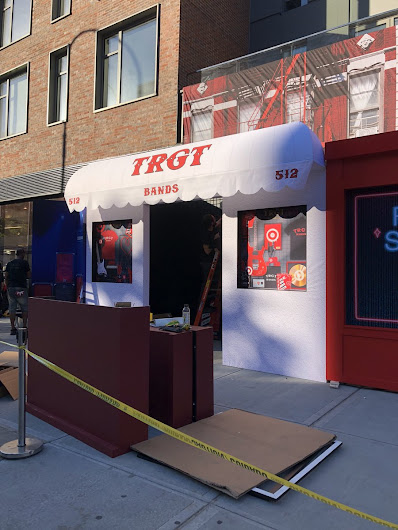 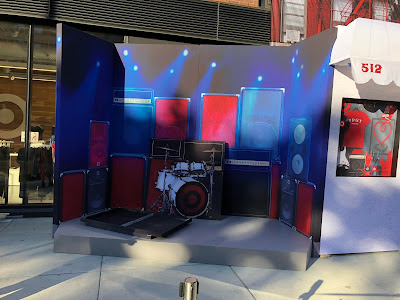 A few readers have already chimed in about this via email (one with a subject line LOL) ... early, unscientific consensus is that this storefront homage is wholly unnecessary.

Pinch shared this photo of the sidewalk event — complete with wrapping reminiscent of tenement buildings — on 14th Street here at EVGB — the "East Village's Greatest Building" ... 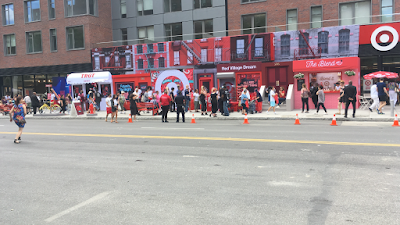 Brooklyn Vegan paid a visit to the faux storefronts ... erected just for today as part of the Target's official grand opening.

Most notably, this includes an homage to CBGB, with “TRGT” in the old Bowery punk venue’s classic font (with “BANDS” in smaller font right below it), and display windows sporting TRGT t-shirts, “rock on” foam hands, and poster that said “The Resistance.” You couldn’t actually buy that stuff from the stand but, wink wink, they did have “bands” in the form of free boxes Band-Aids and exercise bands with the Target logo on them. Right next to the TRGT was a little stage with a “Battle of the Bands” banner and an oversized novelty Target bass guitar for selfie-ing. I did not enquire about the bathrooms. 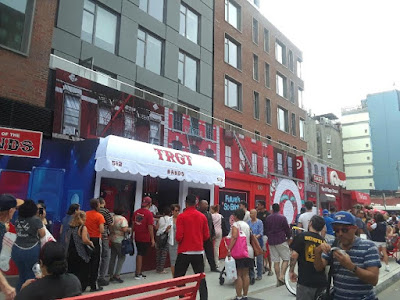 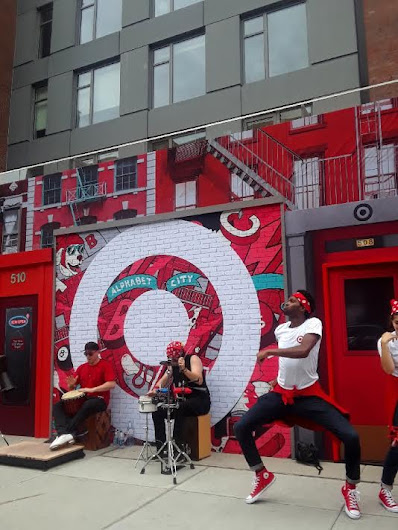 Jeremiah Moss has a post on this at Vanishing New York... describing it as "the most deplorable commodification of local neighborhood culture I’ve ever witnessed." 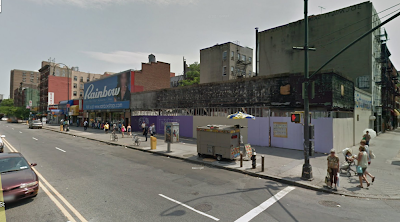 This is what matches were invented for

It's a sign, literally and figuratively, that the world will end, has ended. The celebratory appropriation of another culture by the invader means it's over, long over, and now you are but a trifle to be played with in jest, an ominous footnote, buried among other footnotes, perhaps never even to be read.

Ah jeez. I don't think this is how you make friends in the neighborhood.

The corporations are relentless in their destruction and desecration of everything that made NYC a special place.

This bullshit might fly in a theme park but not in a neighborhood where large chains are directly responsible for driving out the local institutions they’re playing cultural karaoke with.

How do you do, fellow kids?

But will they replicate the bathroom?

Everyone is upset about Target and the spoof on the historic CBGB name (and awning).

Isn’t anyone disburbrd by the 110 unit apartment complex sitting on top of Target? It’s name is EVGB ...... hmm

I am never setting foot in this store. The single most tone deaf bullshit I have ever witnessed. Even the Starbucks had the sense to downplay the signage. This is so in your face it’s a deliberate middle finger to the community.

I'm sure the bland millennials who live in the bland roommate-crammed cookie-cutter "luxury" apts upstairs and across the neighborhood will think it's "amayyyyyzing!," that is, if they look up from their single digit IQ news feeds, or if they even catch the reference, but if they do, they'll selfie away and Target wins! And when the parents come to town, they'll have a familiar (though miniaturized) box store to shop at for Daddy's little Princess and Mommy's lil' brobag wanna-be broke-ass Corporate Douche. Target is based in Minneapolis, and it shows.

Did people object to Daniel Baloud's DBGB restaurant or the fact that the Varvatos store took over the real CBGB's?At least Varvatos pays homage to the place.

The kids from sty town who will shop there could care less. And it will look 'edgy' to the folks back home. It's like Beatlemania-not NYC but an incredible simulation.

The storefront says "future is so bright". The future is over with Target opening.

Blame the landlords who seek such exorbitant rents that storefronts in the neighborhood (where I’ve lived since 1980) are left vacant for years and only the largest chain stores can afford them. I found that pricey clothing store on the Bowery more offensive than this silly pathetic tongue in cheek marketing ploy. Of course, when I saw kids in full frontal “Punk” regalia and Mohawks on St. Mark’s Place in 1981, I recall thinking at the time: “oh please, that’s so 1977....”

Corporations are shameless in their desire to co-opt someone else's hard work for their own profit.

Target should be spending more time and attention to buying merchandise that people in this neighborhood want and need; everyone I spoke with who's been there has had the same reaction: 'MEH, NOTHING TO SEE HERE' because they haven't stocked the store with anything special. I mean, they obviously think this is a "special" rock-and-roll neighborhood — according to their marketing geniuses — but the merchandisers don't see that way; they only stock items that we could just buy anywhere. Target needed to be here decades ago. Too little, too late. F-. Lancellotti Housewares, however, looks FANTASTIC. I was excited about a new Target until I found out it was BLANDSVILLE, USA.

Gee, what next, the St. Marks Bathhouse?

"Kitsch is the stopover between being & oblivion."
-- Kundera, UNBEARABLE LIGHTNESS

Unnecessary is the right word. I don't know how people can continue to get worked up by such a flat attempt at pandering without having had 5 heart attacks already. Compared to the make-the-grimy-art-nice commodification that Williamsburg has gone through, this is nothing. Referencing CBGB is about as creative as using Central Park as an icon for the city as a whole.
Target, we only need you to fulfill our most basic consumer needs. Tinder for toilet paper, paper towels, and granola bars at half price. No one will find community in Target. It will never be a space for companionship. It'll never be a venue for people to act out in response to our world and feel self-worth for a moment... unless this is an invitation?

Actually, yes. But this is on a whole other level.

Someone(s) should be fired for this. It is truly god awful. xo, jg

Qu'est-ce que fuck? People who go to Target would be outraged and horrified at the real CBGB's, and have no clue as to how insulting this is to real New Yorkers. But, then again, so many suburbanite white-bread types have invaded that they have no idea what this hommage is to.

We've sold our souls one storefront at a time.

as a resident of the EV for over 30 years, this is another example of why i made the right decision to leave recently... coopting a long dead punk moment to sell to the fresh from Ohio NYU kids to feel as if they live in a edgy neighborhood... the EV is barely indistinguishable from the UWS now

I remember when real, 19th century townhouses with businesses on the first floor and tenants on the remaining floors occupied this stretch of 14th Street. Now, all we are given is a simulacrum of this vibrant, and once-extant, streetscape.

This is offensive and stupid - I would rather not have this store in the hood. However, I probably will go in to get stuff, because it is there, and there are hardly any 99-cent or other discount stores to get basic supplies around anymore.

@Peter. You are mistaken. I have lived in the East Village for 40 years and there were never townhouses along that stretch of 14th St. The buildings which existed were called "taxpayers", a term used in the real estate industry as one story buildings to pay the R.E. taxes and make a little money. Originally put up to be only temporary until developed. In this case temporary was a very long time. There use to be a big hardware store (Krup's) and some inexpensive clothing stores, a 99 cent store, etc. Never townhouses

If only New Yorkers didn't vote Bloomberg and DeBlasio. We would still have half of how New York was.

The future's so bright, you gotta throw shade.

You can share your feelings with the design team here!

That is surreal! Wait-Did CBGB's used to sell Tuppeware? AND I MISSED IT?

Well that's it...New York is officially OVER! [INSERT THE REST OF YOUR POINTLESS, REPETITIVE COMMENT HERE]

I can’t imagine the day to day lives of people who choose to get upset over this. Of all the things to be outraged over in 2018, this is it?