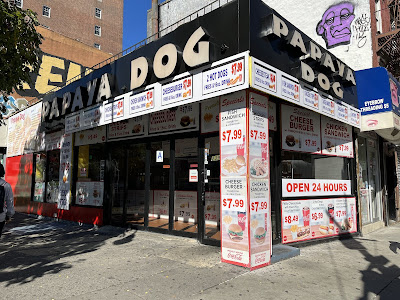 Several EVG readers noted that Papaya Dog has been dark recently on the northwest corner of 14th Street and First Avenue ... and yesterday, KT spotted a worker cleaning out the space. He confirmed that the closure is permanent. (All pics here by KT.)
Later yesterday, some furniture and other PD items were placed on the curb... 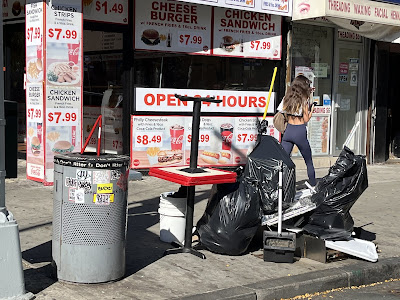 A look inside shows that many of the fixtures have been removed... 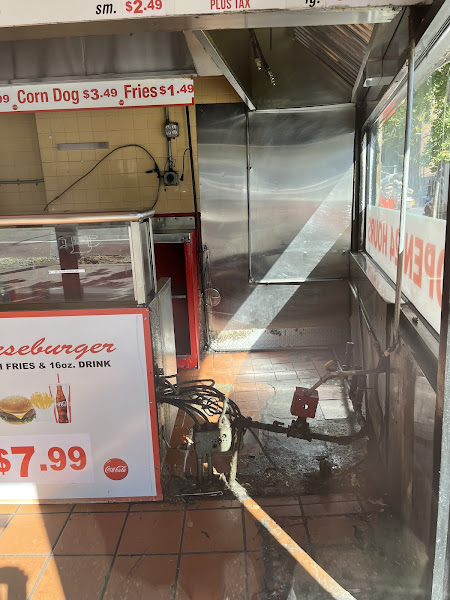 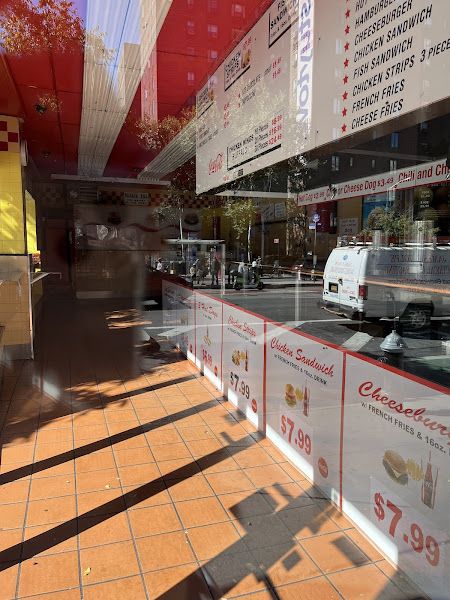 Papaya Dog seems as if it was here forever. However, Manhattan Sideways listed its opening in 2005.
There's a Papaya Dog still in business on Sixth Avenue (and on Fulton Street?), though other quick-serve hot dog joints have dwindled in numbers in recent years. (The circa-1932 Papaya King is still serving up the grilled franks and papaya drinks on the UES.)
While prices here inched up lately, you could still get two hot dogs, fries and a drink for $7.99 late into the night.
This corner also seems primed for development. But at this point, there's nothing official about anything coming to this corner ... for now.
Posted by Grieve at 5:00 AM

Terrible news.
It was great having something open 24 hours on that corner.

Uh oh watch this corner deteriorate even further and fast...

This is terrible. So many junkies on this corner-I blame this . Papaya Dog will be missed :(((

Wow - the best quick take out breakfast for $2.15 anywhere.

This whole corner needs a serious clean up before it's too late.

You beat me to it! Yes.. the potatoes usually had the consistency of wallpaper paste and the toast was barely toasted... but for the price.. couldn't be beat!

RIP. The block is a mess and all the local businesses have suffered. Hopefully a new tenant will take over the space sooner rather than later.

This is really not going to help that corner.

I, once again, echo the concerns about this intersection; quite simply, it continues to be a FUCKING MESS and the closure of this business will likely only add to the many issues that have long plagued the intersection (the SW corner currently is where the brunt of the problems are occurring but it often is VERY fluid on a day to day basis). There remains drug and alcohol use throughout the night and day, screaming and physical fighting, and FILTH (including trash strewn about from ripped open garbage bags, liquor bottles, syringes, and human feces--recently one morning I witnessed a man with no shirt, his underwear and pants down to his ankles completely exposed and wiping himself down in the stairwell of the now closed Joe’s Cleaners). I have lived near this corner for almost 12 years and there are more than a few individuals, who contribute to the above issues, who have been mainstays on the corners of this intersection for literally just as long. Ultimately, in my view, this is not a police issue—there are various City programs (which are well-funded though these funds may not be managed well) that we all pay for, via taxes, that are not being utilized to their full capacities and there are laws that have been changed by local and State government policymakers that have only exacerbated such conduct/behaviors; however, in my opinion, there also needs to be a revisit to consider mandatory involuntary hospitalization/stays in longer-term care facilities/etc. for individuals who are in such serious need (and whose conduct puts others in danger and impacts the overall quality of life for many, many people). I urge the people of our community to continue to contact our local and State government officials so to ensure that they are held to account (and to the elected, local government officials, who likely read this blog...DO SOMETHING that's going to actually make a LONG-TERM difference).

It's hard for any business to survive on that corner with all the shady activity there.

Eating a hot dog takes 36 minutes off your life.

You can use those thirty six minutes to think about how much you hate kale instead I guess.

I expected this to happen when everyone started ordering their hotdogs from Amazon/Whole Prudes.

To Pinch-
Have twice tried to make a 311 report about encampments - but both times the reports were "rejected"/"resolved". Per 311 email response, the NYPD went to the areas but there was no "encampment"

I remember this corner when there was a Blimpie. After playing ball in stuytown , the guys would grab a bite and talk about girls. I miss those innocent times.

311 is a waste of time in general. Try calling the 9th precinct directly.

If you have not done so already, I would suggest that you call Carlina Rivera’s office; they are well aware of the problems at this intersection but they need to continue to hear about it, in my view.

I remember when this was a Blimpie's!

Same here. But I found choosing “dirty sidewalk” has better luck than “homeless encampment.” Last week I reported the SW corner two days in a row and later the second day it was totally cleaned up.

Calling the 9th precinct won't help considering 14th is the dividing line between them and the 13th precinct, who also won't bother doing anything.