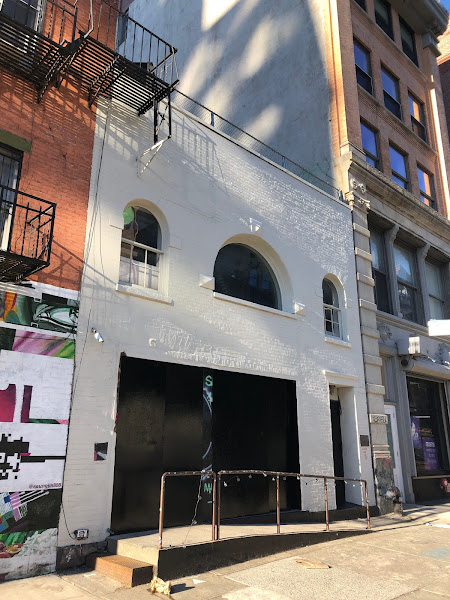 The façade at 57 Great Jones St. was painted over this past week, wiping out the layers of artwork — some of which paid tribute to one-time resident Jean-Michel Basquiat. 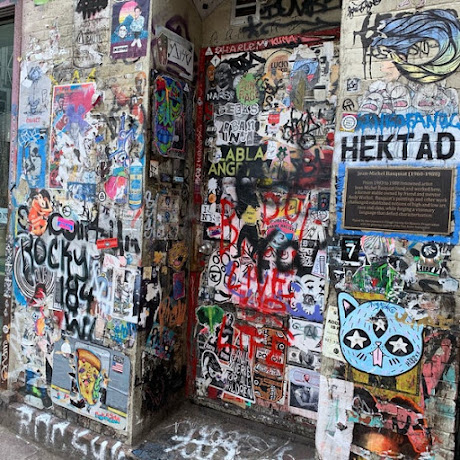 In December 2020, artist-photographer Adrian Wilson (under his now-retired @plannedalism moniker) painted "Let Us Spray" here between the Bowery and Lafayette where Basquiat lived and worked at the time of his death in 1988 at age 27.
The two-story building, once owned by Andy Warhol, now houses Bohemian, an upscale Japanese restaurant ... their curbside dining space included a message by Al Diaz, who, as a teen in the late 1970s, collaborated with Basquiat on a series of cryptic messages seen around the city signed from SAMO©. (The curbside structure's message was covered as well.)
It's not known at the moment who had this painted over. Perhaps there are plans for a new mural? Bohemian didn't respond to a request for comment.
In the fall of 2018, Wilson helped curate the Same Old Gallery, an exhibit that featured Diaz's work. The two also collaborated on a mural here to mark the 30th anniversary of Basquiat's death in August 2018.
In July 2016, the Greenwich Village Society of Historical Preservation (now Village Preservation) unveiled a commemorative plaque outside the building. (The plaque is now splattered with paint — it doesn't appear as if workers covered it.)
One tag remains below the plaque... likely added after the whiteout... 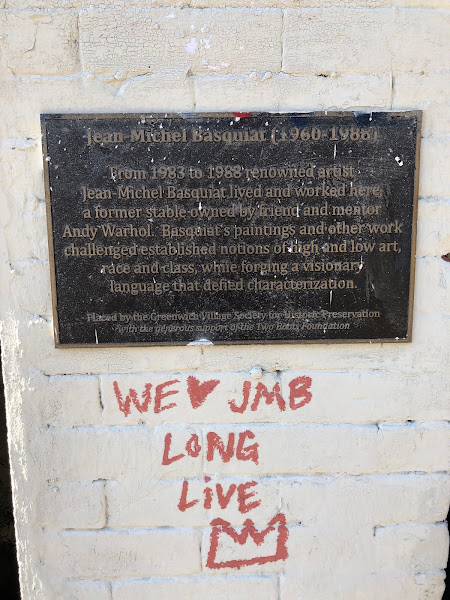 Updated
Here's a better view of the exterior from last year... thank you to @catscoffeecreativity for sharing this photo... 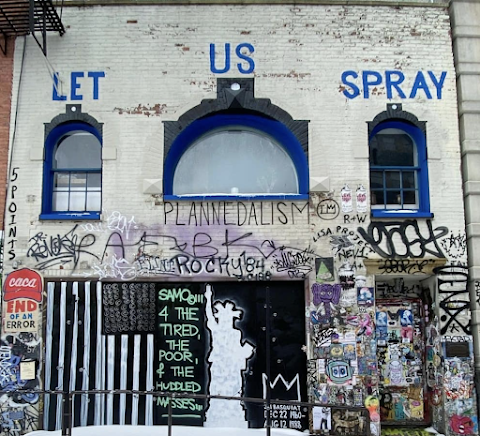 Updated:
A reader shared this photo of the big paint over, which took place the previous weekend... 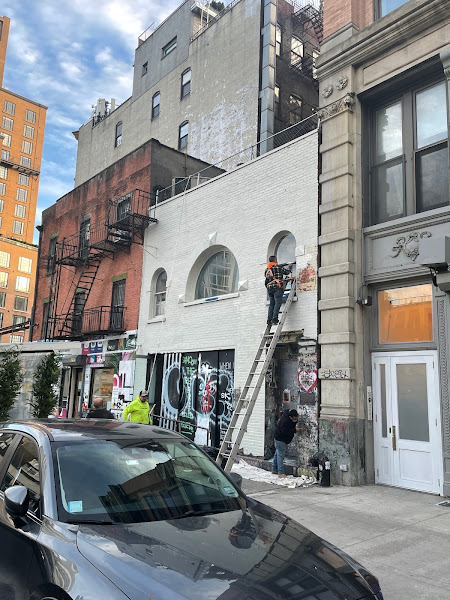 Unfortunate. I guess the patrons were too bourgeois in the end to appreciate it.

Good riddance to bad rubbish. Nothing aesthetic, elegant, or profound about incoherent nonsense splashed about on property one doesn't own.

For their work, Adrian and Al had the permission of the landlord...

Yeah, get sniffy (inaccurately) about property rights when you're talking about a downtown fancy restaurant selling itself as "Bohemian." I recognize graffiti can be a problem in certain situations, but that's just the definition of irony!!!

Inaccurate would be the suggestion that patrons of a restaurant called Bohemian couldn't appreciate street art because they're so awfully bourgeois. In fact, it was the haute bourgeoisie who over 40 years ago bought, collected, hyped, and promoted said art into the very, very highly marketable commodity it is today. The fact is the paint work on that building had about as much appeal as a dope sick junkie vomiting on the sidewalk. It was simply bad art not even worth glancing at. Street artists have their place but if we've being honest they're ten a penny these days.

If you want to see some really great art walk a few doors down to the Acion Gallery at 35 Great Jones which specializes in non-western modern Indian and Pakistani art. Coming from a sniffy, jaded NYer this gallery shows some unique, beautiful, poetic, conceptual, refined, and engaging art.

Snobbery in favor of non-Western art may not have all the nasty connotations of the reverse but it's still snobbery, friend.

Presumably the front was painted over for commercial reasons, which suggests that it was not considered compatible with...whatever the kind of people who patronize a place called "Bohemian" want in 2022.

When it comes to Art the only thing I favor is critical evaluation. As for the white facade it simply looks better than the rubbishy mess that preceded it.

That building also used to be the headquarters of the Five Points Gang, led by Paul Kelly, in the early 1900s.

ARE YOU FKN SERIOUS???