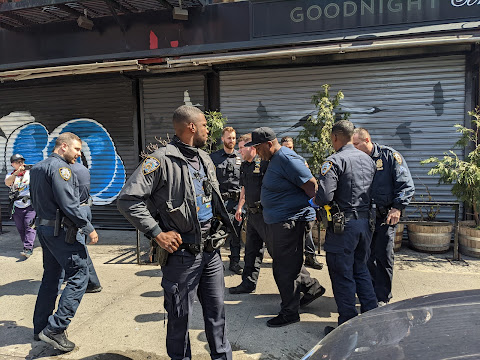 Photo/video by an EVG reader
This just in from St. Mark's Place and First Avenue (the NE corner) ... the NYPD has arrested Frank R. James, 62, who was named a "person of interest" after the mass shooting on the subway in Sunset Park yesterday morning.
Here's a short clip after the NYPD cuffed James...
Elsewhere...

#BREAKING: Suspect is in custody according to five senior law enforcement officials. He was arrested in the East Village this afternoon. https://t.co/Dh9NFZ3PMh

Just witnessed the subway shooter Frank James being arrested in the middle of the East Village…crazy…. pic.twitter.com/g5CJsUpUSF

Per published reports, the shooting left 10 people with gunshot wounds and an additional 13 injured from panic attacks or smoke inhalation during the rush to escape.
Updated 5 p.m.
According to the Associated Press, James is awaiting arraignment on "a charge that pertains to terrorist or other violent attacks against mass transit systems and carries a sentence of up to life in prison."
James was reportedly in the McDonald's on First Avenue between Sixth Street and Seventh Street where several witnesses, including Zack Tahhan, 21, who was working for MACA security integrators outside Saifee Hardware, and the shop's manager, Frank Puebla, spotted the alleged shooter.
Puebla said he flagged down an NYPD cruiser that just stopped at the light on the SE corner of First Avenue and Seventh Street. (We an interview with Tahhan and Puebla here.)
CNN is reporting that James called the tipline on himself.
Back to the AP story:

James was gone when officers arrived, but they soon spotted him on a busy corner nearby.
Four police cars zoomed around a corner, officers leaped out and, soon, a compliant James was in handcuffs as a crowd of people looked on, witness Aleksei Korobow said.

Officers from the 9th Precinct on Fifth Street made the arrest.

pretty sure the new conference said he was hanging out at the McDonald's right before they caught him..........

Of course he was spotted eating in the McDonald's on 6th Street, that's the first place they should have looked for him. Why he picked this neighborhood to hide out in is a mystery. Good job by the NYPD, but he wasn't exactly making it hard to find him.

I swear, the EV is a magnet for troubled souls. If Marz Bar was still around, I bet they would have found him there.

I wonder who will play him in the inevitable Law & Order episode.

More video from the owner of Dacia Gallery, who also spotted and alerted police.

What in the world..

I think everyone is breathing a huge sigh of relief today. This already hit close to home for every NYer, but that now goes double for EV residents.

Alleged shooter, please. That man is not 5'5". But I sincerely hope that they did catch the right guy.

“Go out only at night. If you must go out during the daylight, only the East Village” (Men in Black)

“Holy shit” is right (as overheard in the one video posted above.) Glad they got him. Stay safe, people!

Some guy named Zach is being credited all over the media as the person who spotted the shooter and got the cops. I don’t think the media knows the gallery guy mentioned in an earlier post was also involved.

Mars Bar? What a nonsensical thing to say.

Police says he himself actually called 911 and said:"I think you're looking for me, I'm seeing my picture all over the news and I'll be around this McDonalds."

Your neighbor certainly is getting a credit:
https://abc7ny.com/zack-tahhan-nyc-subway-shooting-frank-james-brooklyn/11745173/

So it turns out this guy dropped dime on himself. So does he get the reward money?

That guy could barely walk how did he get away from the location of the incident in Brooklyn evading all the cops that responded and eventually make his way to the East Village a day later?

Don’t even start with the alleged. The fact that people who endured smoke bombs and being shot at didn’t get his height correct while they were lying on the subway ground should be considered. Also, he was tracked down by forensic accounting with his subway card and credit card, not purely by his height.

Just another day in the East Village.....

"Don’t even start with the alleged. The fact that people who endured smoke bombs and being shot at didn’t get his height correct while they were lying on the subway ground should be considered."

Duh. But did you ever hear of the cops picking up the wrong guy before? I'm advocating for the very mildest of restraint prior to his trial, which it's a disgrace for a grown-up citizen to bridle at the idea of.

everyone was in shock plus the smoke bomb made things impossible to see. Most people don’t want to get involved to begin with and put their life in the line by tackling this guy. Real life is different from Hollywood that’s for sure.