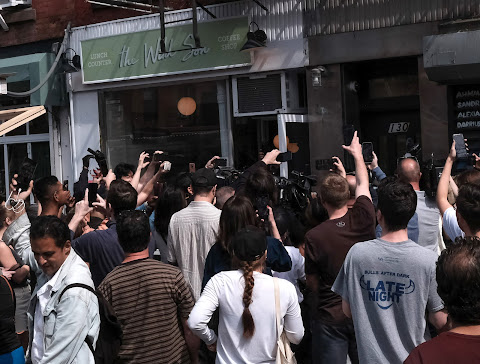 Top photo from an impromptu press conference on 1st Avenue by Derek Berg
Two men working outside Saifee Hardware & Garden on the SE corner of First Avenue and Seventh Street are being praised for spotting alleged subway shooter Frank R. James minutes before his arrest this afternoon.
As previously reported, James was the sole suspect in the mass shooting on a crowded subway train and platform yesterday morning in Sunset Park.
At least 30 victims were treated at four local hospitals following the attack, and all but seven had been released as of this afternoon, per Gothamist.
James, wearing a blue t-shirt and brown pants, was reportedly inside the McDonald's on First Avenue between Sixth Street and Seventh Street. According to the Associated Press and other outlets, James called in a tip himself, telling police where he was.
He was already gone when the police got to the scene. However, Zack Tahhan, who was working for MACA security integrators installing cameras outside Saifee Hardware & Garden, and the shop's manager, Frank Puebla, spotted the alleged shooter walking by on First Avenue.
Puebla said he flagged down an NYPD cruiser from the 9th Precinct that had just stopped at the light on the SE corner of First Avenue and Seventh Street. James was then arrested on the NE corner of St. Mark's Place and First Avenue without incident.
EVG correspondent Stacie Joy was on the scene and filmed this clip of Tahhan recounting what happened this afternoon...
... and here's Puebla telling his story...
According to NBC 4, the U.S. attorney for the Eastern District of New York is considering filing federal criminal charges in the subway attack. The station reported that one potential federal charge being considered is using a weapon/arson on mass transit/train.
Meanwhile, Saifee is showing its appreciation for the longtime manager...

I loved Saifee before, now even more so!

Well, by now there's a fierce competition developing for the real hero title (and maybe the 50K attached...). Mr Puebla apparently isn't that happy with Mr Zach claiming the title all to himself. Read more here: https://www.nytimes.com/live/2022/04/13/nyregion/brooklyn-subway-shooting#zach-tahhan-subway-shooting

Yes, the next time you’re in serious trouble, call a random Zach, not law enforcement. See how that works out for you

I knew this would happen! Gotta love nyc