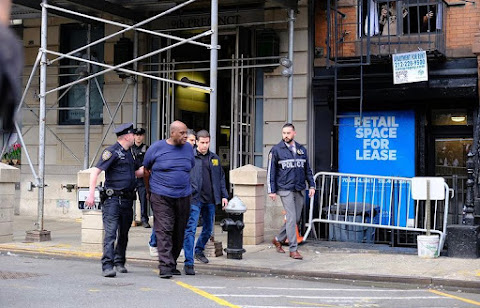 Photo at the 9th Precinct on 5th Street yesterday by Katie Godowski
Frank James, accused of opening fire on a crowded subway train in Sunset Park on Tuesday, made his initial appearance in a federal courtroom this afternoon. A U.S. federal judge ordered the alleged gunman to remain in custody.
Per CNN:

In court, Assistant US Attorney Sara Winik described the attack as "premeditated and carefully planned" as prosecutors requested James remain behind bars.

Defense attorneys told the federal judge they consented to him remaining in custody for now but may press again for bail later. The lawyers further asked for a psychiatric evaluation to determine James' medical needs.

His attorney, Mia Eisner-Grynberg, had this to say:

"We are all still learning about what happened on that train. What we do know is this: Yesterday, Mr. James saw his photograph on the news. He called Crime Stoppers to help. He told them where he was. Initial press and police reports in cases like this one are often inaccurate. Mr. James is entitled to a fair trial, and we will ensure that he receives one."

James was arrested on the NE corner of First Avenue and St. Mark's Place yesterday afternoon. According to media accounts, James called the NYPD tip line and told authorities where they could find him.
Two workers outside Saifee Hardware & Garden are also credited with alerting police after spotting James walking by the store on the SE corner of First Avenue and Seventh Street.
Posted by Grieve at 4:00 PM

The EDNY federal public defenders are a very talented bunch. James is lucky.

Good, now get the police helicopters out of the sky, trying to sleep here.