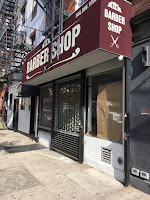 Signage is up for the incoming tenant at 199 E. Fourth St. — B&H Barber Shop.

The retail space here between Avenue A and Avenue B was previously the Eye Beauty Spa, which closed during the summer after 15 months in business. And before this, it was Salon Champu.

As previously noted, this building was one of six on Fourth Street that the Kushner Companies bought for $49 million from Ben Shaoul’s Magnum Real Estate Group and Meadow Partners back in 2013.
Posted by Grieve at 4:00 AM 1 comment: