Your chance to visit a library in a coffee shop today 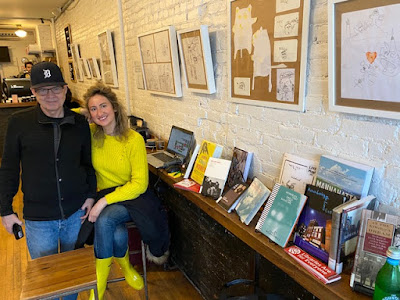 As we've noted, the folks from the Tompkins Square Library on 10th Street between Avenue A and Avenue B have been bringing their pop-up cafe branch to Ninth Street Espresso — the location a few doors away at 341 E. 10th St. — on a bimonthly basis

EVG regular Greg Masters shared the above photo and this recap after the branch's visit on Feb. 6:

The Tompkins Square Library is bringing its collection to the people with a pop-up presence. Every other Thursday, from 11-1, librarian Alyona Glushchenkova, here seen with poet Jeff Wright, sets up shop with treasures to borrow at the Ninth Street Espresso.


With each visit, the library will offer books about the neighborhood, its history, culture and artists. You may even check them out right from Ninth Street Espresso.

Previously on EV Grieve:
A visit to the Tompkins Square Library branch on 10th Street
Posted by Grieve at 4:20 AM 1 comment: 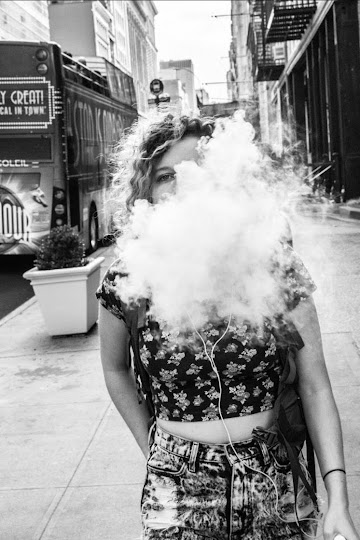 East Village-based photographer Ryan John Lee has a selection of his work on display at 9th Street Espresso (the location on 10th Street near Avenue B)... you can read more about this exhibit, which is up through Sept. 22, here.

He has shared his work with EVG in the past, such as here and here.
Posted by Grieve at 9:04 AM No comments:

Part of the former Life Cafe now for rent 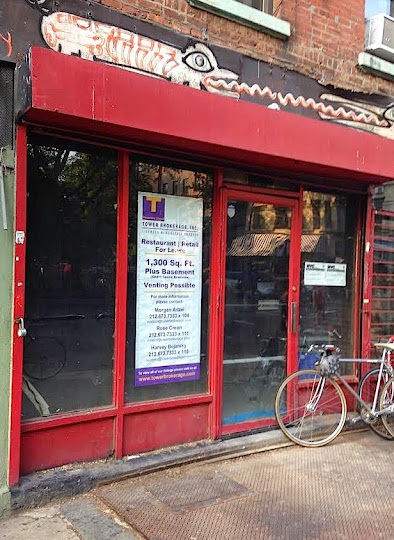 Last we heard, the East 10th Street outpost of 9th Street Espresso was planning on moving next door into part of the former Life Cafe space near Avenue B. (Maiden Lane is in the other space that made up Life.)

Apparently that's no longer a go: There's now a for lease sign via Tower Brokerage on the front window. (We didn't spot the listing online yet.)

Aside from coffee, 9th Street Espresso owner Ken Nye said that he would offer three craft beers on tap with a 11 p.m. closing time. (CB3 OK'd the license in June 2012.)

Cleaning out the second half of the former Life Cafe
Posted by Grieve at 4:41 AM 5 comments:

'Past Future Past' now at 9th Street Espresso 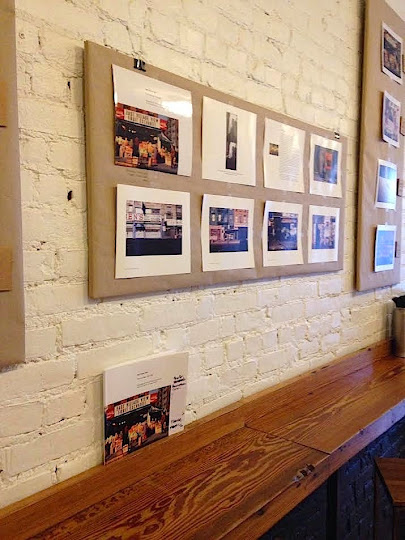 We're behind in noting that EVG contributor Michael Sean Edwards is showing some of his work at 9th Street Espresso (the one on East 10th Street near Avenue B).

His work is on display through Dec. 17.

Previously on EV Grieve:
The East Village of Michael Sean Edwards
Posted by Grieve at 9:40 AM No comments: 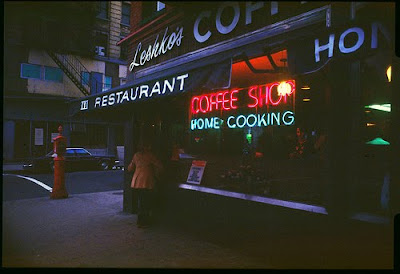 [Leshko's on Avenue A at Seventh Street circa 1979] 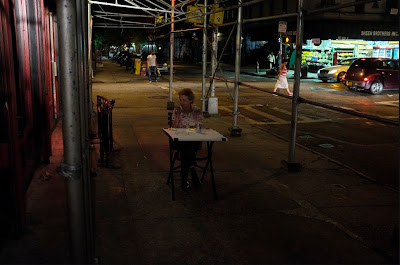 Michael now has a few of his large prints up at 9th Street Espresso (on East 10th Street near Avenue B)... 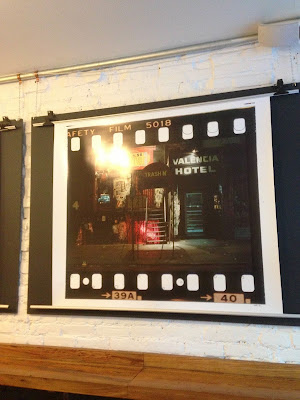 9th Street will feature his work through Sept. 27... 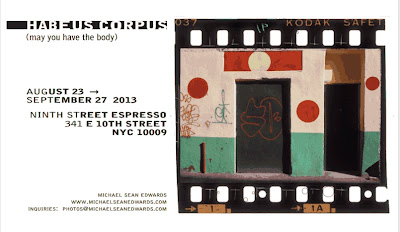 Find more of Michael's photos here.
Posted by Grieve at 12:07 PM No comments:

Cleaning out the second half of the former Life Cafe 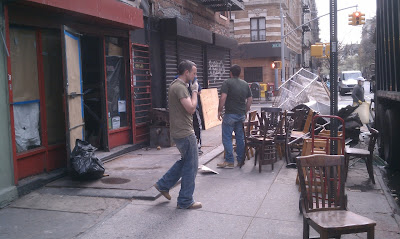 As these photos by EVG regular Steve Carter show, there's activity inside part of the former Life Cafe on East 10th Street at Avenue B this morning ... workers are, presumably, removing the remains of the Cafe that closed Sept. 11, 2011... 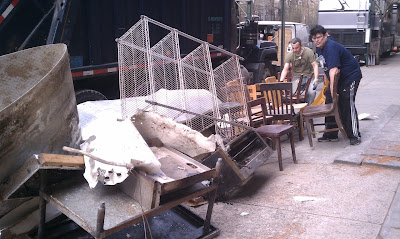 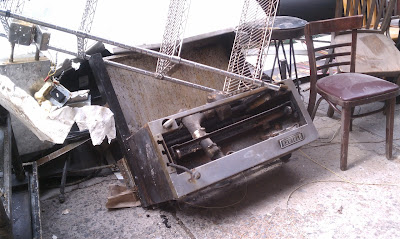 The 10th Street outpost of 9th Street Espresso had been planning on expanding from next door into this space... and adding three beers on tap... for a cafe with an 11 p.m. closing time, per DNAinfo.

It looks as if this plans are finally moving forward.

Meanwhile, in the other part of Life Cafe, Maiden Lane hopes to launch a lunch service by the end of the week, as we reported Monday. 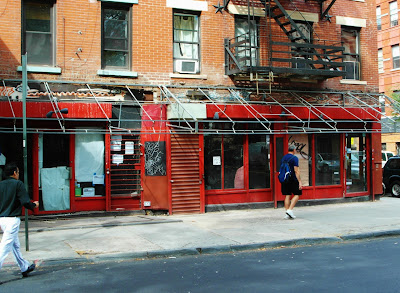 We also received a rather cryptic tip that someone is taking over the former Life Cafe space on the corner... (9th Street Espresso is expanding into half of the storefront, as The Villager first reported.)

The for lease signs have been removed... and the space is no longer on the NYREX site for available retail ...

We spotted workers inside the former Life, but they appeared to be using the space as an annex for the renovations next door at Blackbird...

Know anything about the situation here? Please send them our way via the EV Grieve email
Posted by Grieve at 6:28 AM 3 comments:

On the CB3/SLA June docket: Beer and wine for Ninth Street Espresso (on 10th Street)

Here are a few notable items: 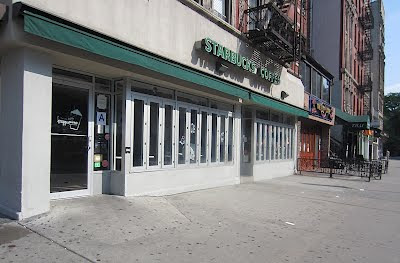 Don't think this is for alcohol ... just getting their paperwork back in order for the sidewalk cafe that the city shuttered ...

Applications within Resolution Areas
• To be Determined, 34 Ave A (wb)

The mystery applicants for the former Aces & Eights space are back. Third month in a row that they've appeared on the docket. The new applicants have pulled out of the last two meetings.

Getting ready to settle into their new home.

As Scoopy first reported at The Villager, Ninth Street Espresso on East 10th Street is moving next door into half of the former Life Cafe space... and this move looks as if it will include a beer-wine list.

Also... mystery applicants for the former Hea/Friend House space on Third Avenue at 13th Street... and the Mercadito Cantina on Avenue B... and something new for Bar on A, which had been for sale...
Posted by Grieve at 6:58 AM No comments: 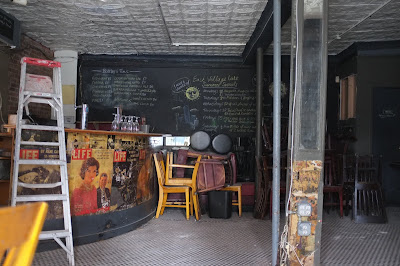 As we first reported a few weeks back, the dueling landlords who own Life Cafe planned to split the space in two ... part of the space is for rent... Thanks to The Villager, we now know what is filling half of the former Life Cafe — 9th Street Espresso, which will be moving next door ... Scoopy has the details, which include:

Moving one storefront to the east will almost double the cafe’s space, from 500 to 900 square feet. The new location, at 343 E. 10th St., is not only much wider, but will include Life’s former backyard garden, which [landlord Bob] Perl plans to enclose — though it will still have skylights — allowing year-round use.

Read all of Scoopy here.
Posted by Grieve at 6:52 AM 3 comments:

From an article by Sheila McClear in the Post today about passionate or, perhaps, snobby baristas...

It was after the third “act of violence” at Ninth Street Espresso in the East Village that owner Ken Nye held a staff meeting. The strict policies of the coffee shop — including the refusal to sell espresso to go — had so enraged one customer that he threw a tip jar across the store in protest.

9th Street Espresso is back open — and seemingly bigger 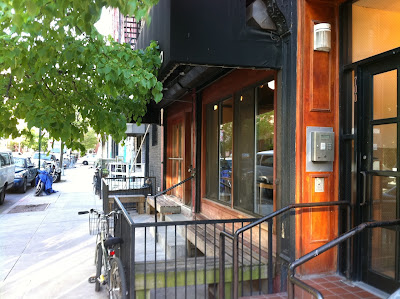 ...and the space has been opened up... making it seem a little more airy? Like, in a good way.) 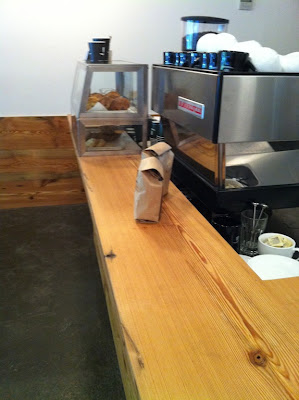 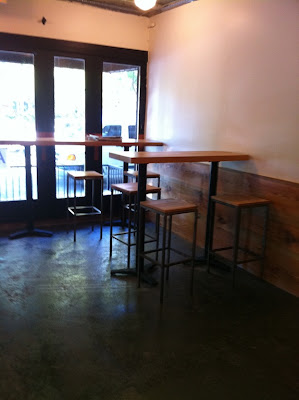 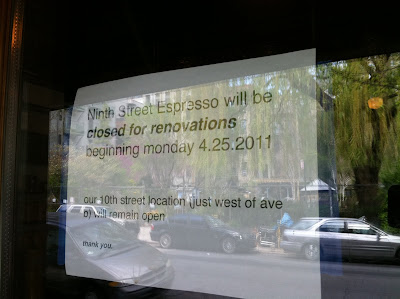 Next to Life Cafe. (Meanwhile, the flagship Ninth Street Espresso on Ninth Street between Avenue C and Avenue D will be closed all this week.) 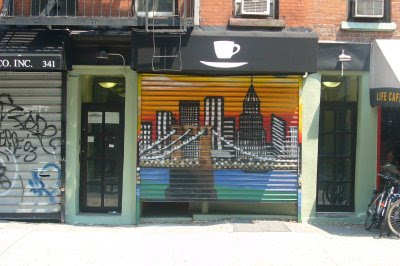 Previously on EV Grieve:
Ninth Street Espresso coming to 10th Street
Posted by Grieve at 6:59 AM No comments:

This summer, at the site of the former Tompkins Square Bakery next to Life. [Update: There seems to be some confusion... thanks to the commenter for the note. The bakery's address was 341 E. 10th St., now home to the real-estate office... The Ninth Street Espresso's Web site said they are moving into 341 E. 1oth St. I'll get this right eventually. And none of this will be on the midterm. Regardless, there will be a new Ninth Street Espresso location on 10th Street...] 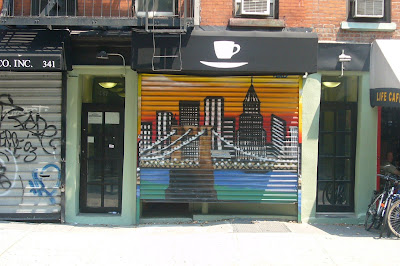 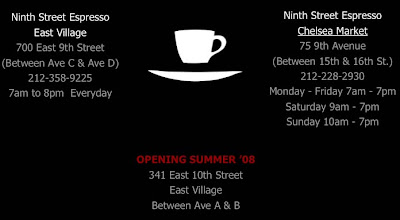