Going 'Ape' over this gate at the East Village Vintage Collective 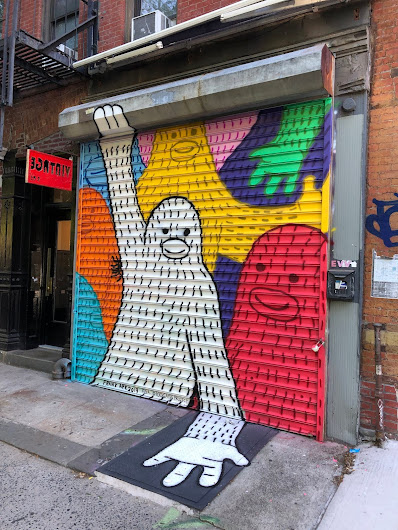 We have two reader-submitted photos from the weekend... showing the new Frank Ape mural on the gate at East Village Vintage Collective on 12th Street between Avenue A and Avenue B... 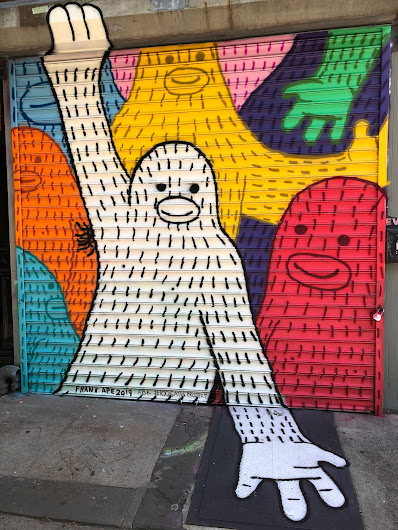 The new mural went up back on Friday as part of the 100 Gates Project, which provides site-specific artistic collaborations with East Village merchants.

Previously on EV Grieve:
Planet of the Frank Ape: Q-and-A with artist Brandon Sines
Posted by Grieve at 8:00 PM 4 comments:

An evolution in yarn at La Plaza Cultural 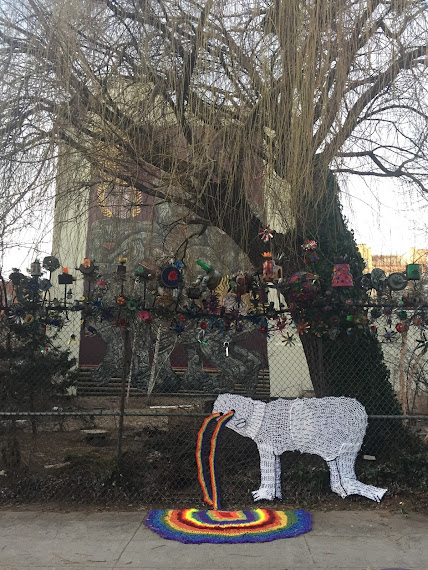 This yarnbomb collaboration between @madebylondon and Frank Ape on East Ninth Street at Avenue C arrived outside La Plaza Cultural on Thursday... 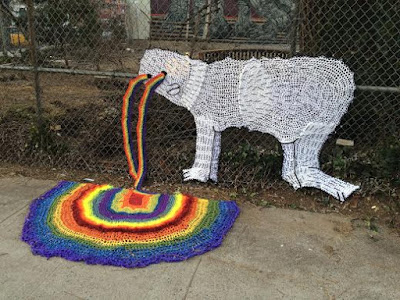 ...replacing the dinosaur that had been here. In terms of evolution, we're progressing — dinosaur to ape to...
Posted by Grieve at 7:36 AM 7 comments: 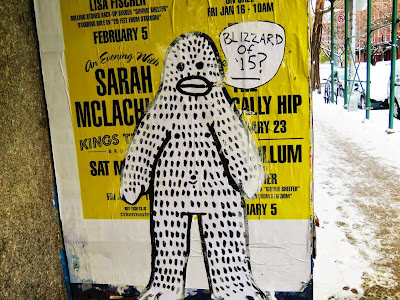 A Frank Ape sighting on East Ninth Street near Avenue B … photo by Bobby Williams
Posted by Grieve at 5:34 PM No comments:

Make it work: Frank Ape as a crop top on 'Project Runway' 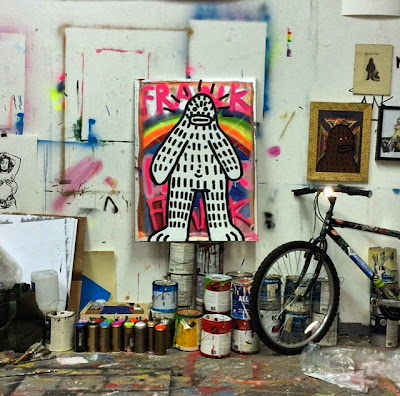 Frank Ape, a familiar wheat-pasted character around the neighbor, is making his cable debut tonight at 9 … on an episode of Lifetime's "Project Runaway."

This info that arrived in our inbox explains: 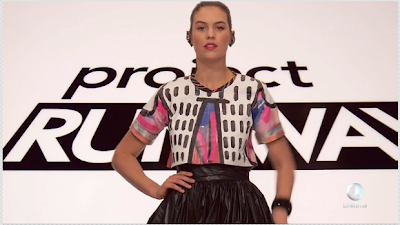 Frank Ape is the creation of artist Brandon Sines. 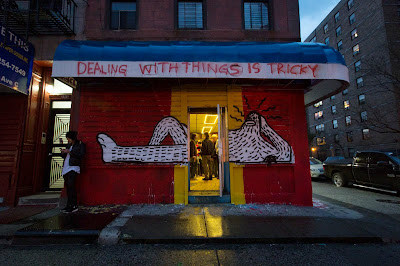 Last night at Specials on C, artist Brandon Sines unveiled a new exhibit titled "Dealing With Things Is Tricky" … an immersion into the world of his character Frank Ape…

Photographer Walter Wlodarczyk was on hand and shared these photos… 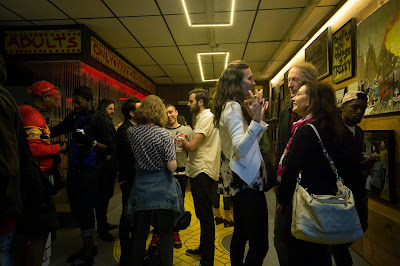 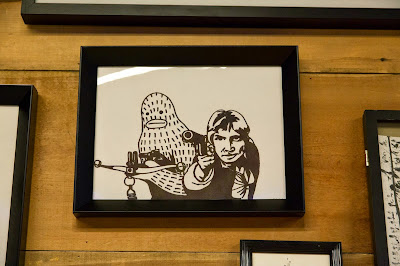 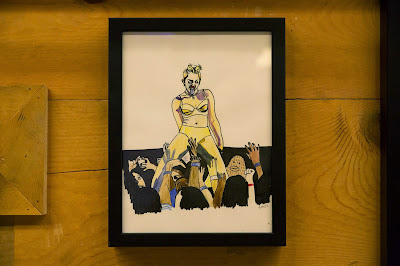 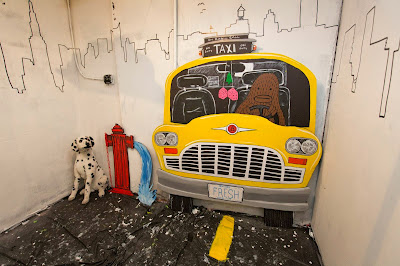 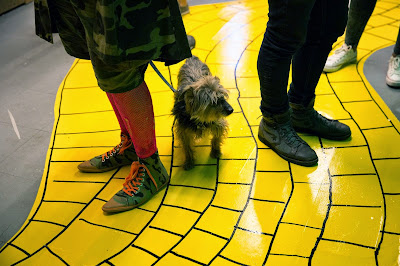 Previously on EV Grieve:
Planet of the Frank Ape: Q-and-A with artist Brandon Sines
Posted by Grieve at 8:05 PM 3 comments:

Planet of the Frank Ape: Q-and-A with artist Brandon Sines 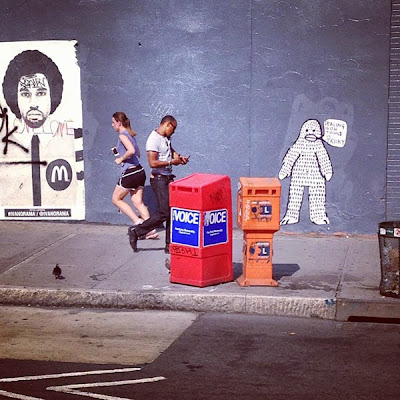 Tomorrow night at Specials on C (the former corner deli on Avenue C and East 12th Street), Brandon Sines will have his work featured in a new exhibit titled "Dealing With Things Is Tricky."

You may recognize his favorite subject — Frank Ape, which Sines has wheat-pasted or painted around various spaces in the neighborhood.

Here's more about the show via the EVG inbox:

"Dealing With Things Is Tricky" is Sines' second solo show and his most ambitious work to date. The main subject of "Dealing With Things Is Tricky" will be Sines' hairy, unkempt street denizen character known as Frank Ape ... [the show] is a total immersion into the world of Frank Ape. Drawings, paintings, and mixed-media pieces [take] inspiration from contemporary pop culture, celebrity, and iconic movie and music imagery. 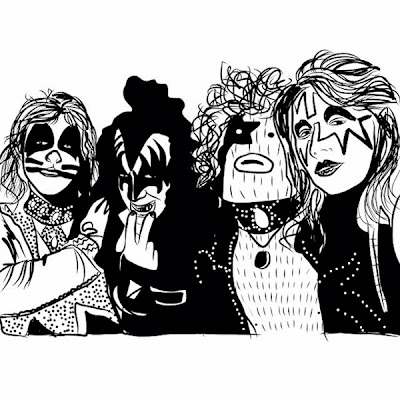 We're Frank Ape fans, so we thought we'd ask Sines a few quick questions on the eve of the show.

You were never interested in pursuing art, let along attending art school. So how did all this come about?

I guess I had my own ideas of what I wanted to do, which never involved "art," but always involved being my own boss... I tried a bunch of different things, which everyone has to do to figure out what they like. During that period I started playing around again with drawing and painting like I did when I was a kid, and everyone just responded to it so positively. It got to a point where I couldn't ignore it, and I had to acknowledge where my natural skill sets were and how to nurture them. It's really motivating to have an audience that responds to what you're doing. 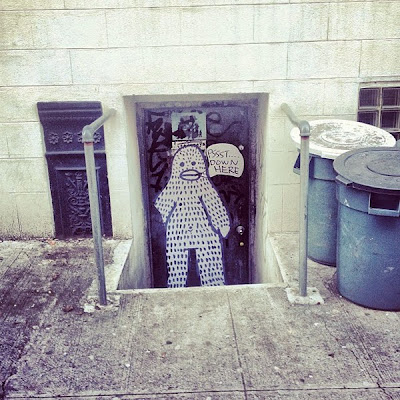 How did the creation of Frank Ape evolve?

Just an idea I had for a painting in 2011...putting this person, who is like us, but who isn't so intellectually evolved — more emotionally, in a traumatic situation. I kept wanting to repeat the character and it organically turned into it's own thing. I don't really put Frank in many traumatic situations anymore. Now it's more about having fun and pushing the limits of how we can make Frank come to life.

There's a 1980s influence/inspiration in your work. Do you ever wish that you could have been creating art/living in that time period instead of now?

Haha, yeah part of me used to feel that way... but I think we'll be looking back at this time in 25 years and feeling the same romantic, nostalgic feeling that we do now about the 80s. So I totally embrace where I'm at. 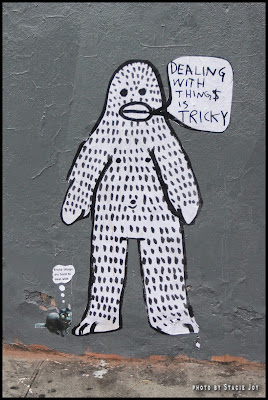 [Photo from October by Stacie Joy]
Posted by Grieve at 5:30 AM 8 comments:

Going Ape on East Houston and Avenue B 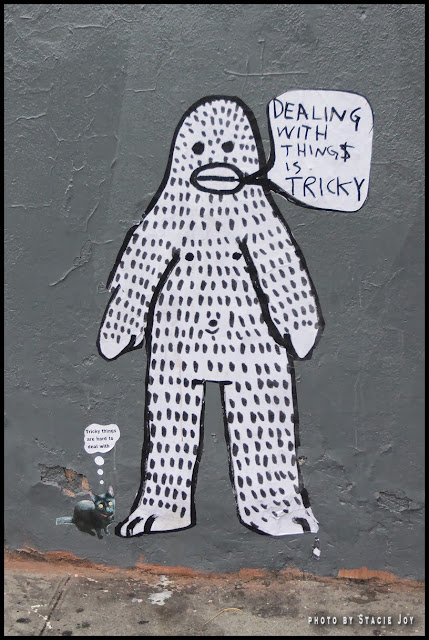 Just pointing out the recent arrival of a Frank Ape original on the East Houston Street side of 6 Avenue B ... not sure who added the kitty below... 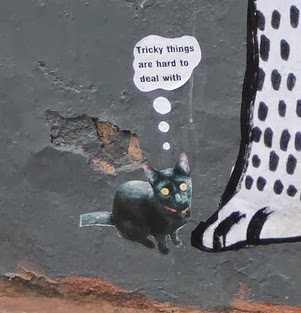 Photo by Stacie Joy
Posted by Grieve at 7:06 PM 1 comment: