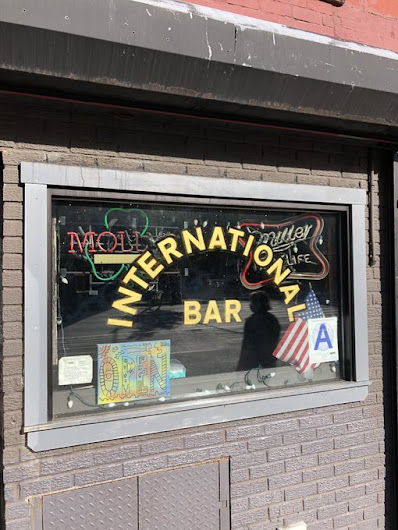 More and more restaurants and bars are reopening for take-home service. Notable reopenings include International Bar at 102 First Ave. at Sixth Street. Molly & Co. have set up a table at the front door to order drinks to take home daily from noon to 8 p.m. 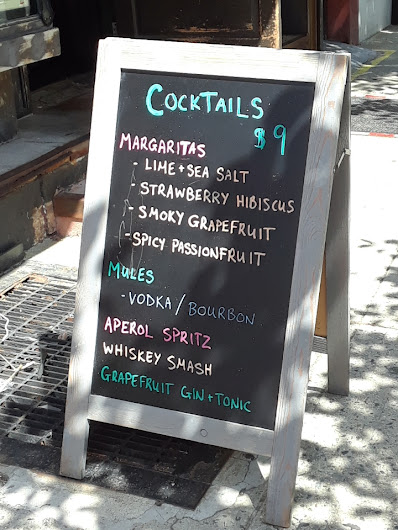 Hearth reopened yesterday on 12th Street at First Avenue ... for now, they're offering a take-home drink service from 2 p.m. until dark ... 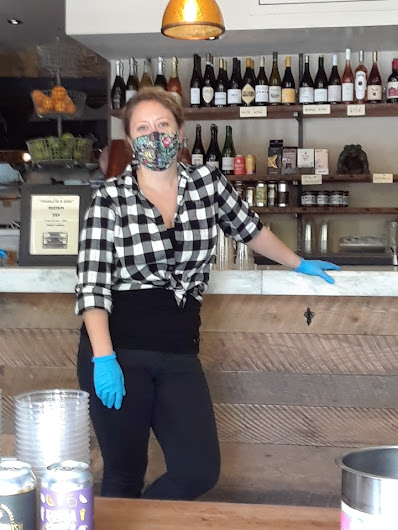 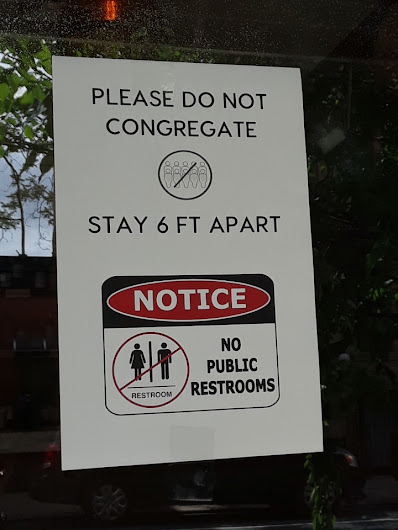 Coming soon from Hearth: A new food menu with take-home and delivery service ... as well as some pantry items.

Other recent reopenings include the Bowery Electric on the Bowery and Kelly's on Avenue A (Thursday through Sundays)...

For more on what's open, check out this interactive EV map.
Posted by Grieve at 11:00 AM 3 comments: 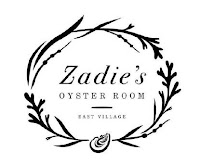 Hearth now has six tables (with two chairs each) set up for diners on First Avenue and East 12th Street... it's a scaled-back version of what was previously proposed last summer with 38 seats total.

Meanwhile, over on Avenue A at East Seventh Street, Black Market rolled out their sidewalk cafe this past weekend... 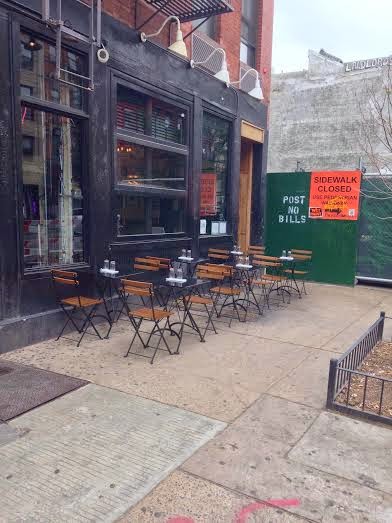 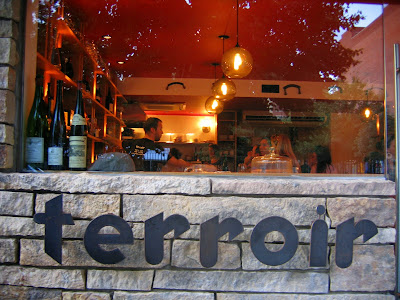 The original East Village outpost of the wine bar Terroir at 413 E. 12th St. between Avenue A and First Avenue closed after service this past Saturday night.

We'll head to Eater (who also posted the menu) for more:

The drink menu at Fifty Paces is still focused on wines by the glass, served in either three or six ounce pours, and also includes a few sherries and ciders, and a handful of beers ... The food menu, meanwhile, now consists of dishes "inspired by" the food at Hearth. It's an on-trend bar menu, with small snacks, toasts, and large shared plates like pork ragu sloppy joes, yoshi fried chicken, and braised rabbit legs with polenta.

Fifty Paces will also serve some of the broth that Canora sells at Brodo, the newish to-go spot on First Avenue.

This Terroir closed after six years following a business split between Canora and Paul Grieco, who will continue operating three of the other wine bar locations in the city.

As Eater reported last month, the original East Village outpost of the wine bar Terroir at 413 E. 12th St. between Avenue A and First Avenue closes after business tomorrow night.

It reportedly has something to do with the business split of Paul Grieco and Hearth chef Marco Canora. Grieco will be running the other Terroir locations and Canora will carry on with Hearth, Brodo and what the former East 12th Street Terroir space becomes.

Whatever the new concept is, it looks to be debuting very soon...

Tomorrow night is the final night of Terroir in the East Village. Don't fret -we'll be back Wednesday, 2/4 with a new name & new menu items! 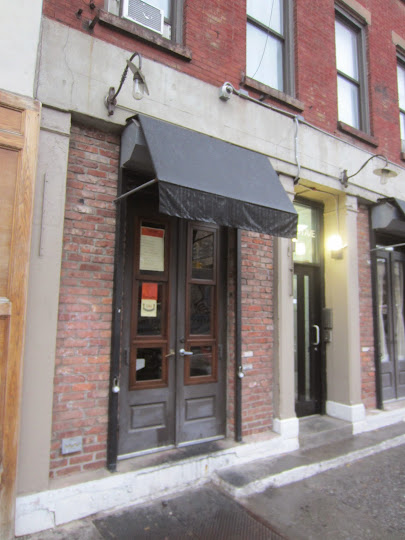 Hearth chef Marco Canora has added a new to-go window (door?) on the First Avenue side of the restaurant.

And starting today, you can get broth and soup at Brodo (Italian for broth) ... 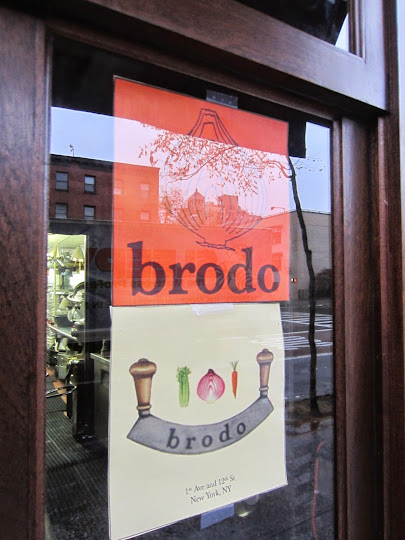 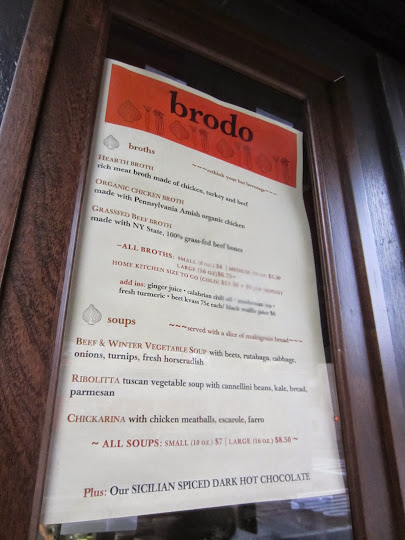 Canora talked with New York magazine/Grub Street, who first reported on Brodo, about how all this came about:

“Twenty years of eating bread, drinking booze, smoking cigarettes, and working in kitchens really fucked me up in a big way.”

Until quite recently, you see, Canora was not the epitome of good health. He’d been diagnosed as pre-diabetic, he was suffering from gout, his cholesterol was through the roof, and he was thirty pounds overweight. Now, at 45, having made some major changes in his diet, he says he’s in the best shape of his life. And he attributes not a small part of this reversal of fortune to daily doses of the broth he’s always made as a base for Hearth’s soups and stocks.

Someone stole the bench from outside Hearth last night 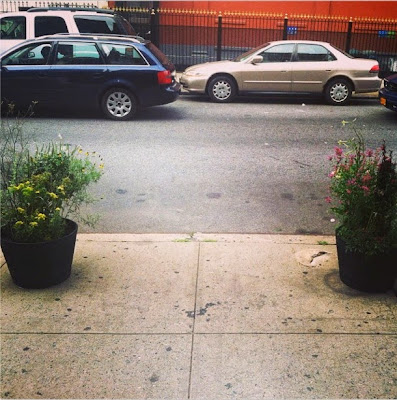 Per the restaurant's Instagram account: "Our bench has been taken on an adventure...who steals a bench anyway?"

Well, those kids in the new garden apartments at [redacted] are paying top dollar for this stuff. We'll see if we can get a before photo of the bench to share...

EVG reader dwg happened to have a photo of the bench in the archives... 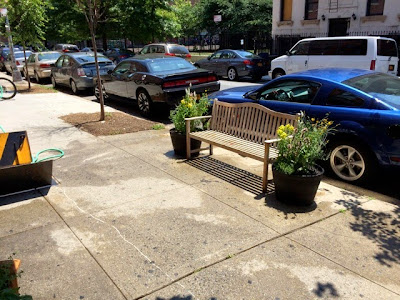 Email ThisBlogThis!Share to TwitterShare to FacebookShare to Pinterest
Labels: Hearth 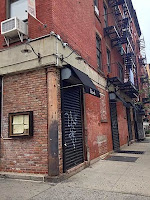 Hearth, the well-regarded restaurant at 403 E. 12th St. at First Avenue, is applying for a sidewalk cafe during this month's CB3/SLA licensing meeting.

While residents feel as if Hearth is a quality restaurant and a good neighbor, there are concerns about the proposed 38-seat sidewalk cafe. (Residents are also sympathetic to the fact that Hearth's landlord recently hit the restaurant with a 65-percent rent hike.)

So residents and members of the North Avenue A Neighborhood Association are meeting with Hearth reps tomorrow night at 7 to discuss the plans. The meeting is in the office of the East Village Community Coalition, which is located just off the lobby in the Christodora House, 143 Avenue B.

Here's a diagram of the East 12th Street side of the restaurant that Hearth submitted. 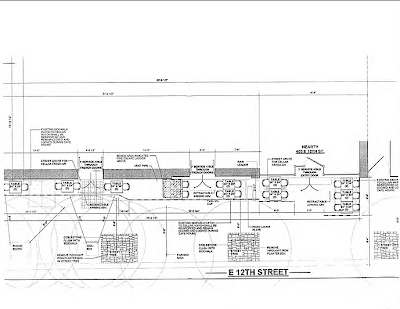 One Association member said there is already a lot of "pedestrian congestion" in the area around First Avenue and East 12th Street with especially high foot traffic from the L train stop at East 14th Street.

"And now with 160 new apartments scheduled to be built at the corner of East 12th Street and Avenue A, it seems the congestion will only increase," the member said.

Report: Hearth hit with a 65% rent increase; plus, sidewalk cafe in the works

Meant to note this the other day... when the Times reported that Danny Meyer's 30-year-old Union Square Cafe will be looking for a new home next year after a rent increase.

The article noted a recent spate of high-profile closings and a continuing rise in rents downtown. Among the restaurants facing a huge rent hike: the well-regarded Hearth on East 12th Street at First Avenue. They were just hit with a 65 percent increase, according to the Times.

There aren't any plans to close the place, but ...

[T]he chef and owner, Marco Canora, said his entire business model may have to change.

“I’m trying to be a smart businessman,” Mr. Canora said. “But I can’t do that at the cost of turning my back on my entire belief system and serving commodity pork and Perdue chicken.”

Meanwhile, here's one way to help increase revenue: Hearth has applied for a sidewalk cafe. They are on the docket for the CB3/SLA committee meeting on July 14.
Posted by Grieve at 5:00 AM 9 comments:

More photos from the cab accident outside Hearth Friday night

Friday night around 11, as Eater pointed out, a cab ended up plowing into Hearth on First Avenue at 12th Street... The folks at Hearth said that no one was injured... In any event, EV Grieve reader neerad jet sent us two more photos following the accident... 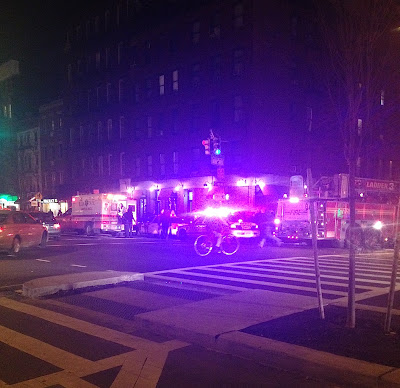 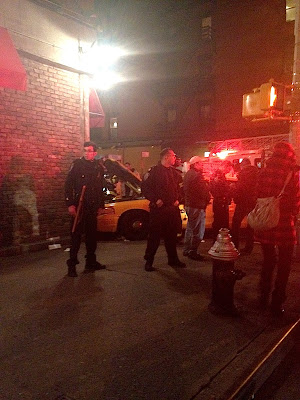 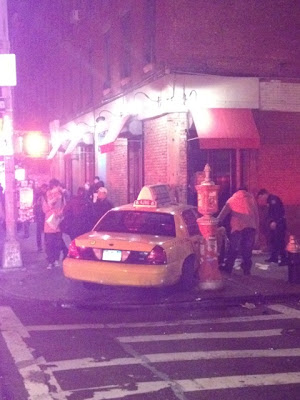 From Eater, we learn that a cab crashed into Hearth on First Avenue at East 12th Street last night around 11. There weren't any injuries.
Posted by Grieve at 1:07 PM 9 comments: