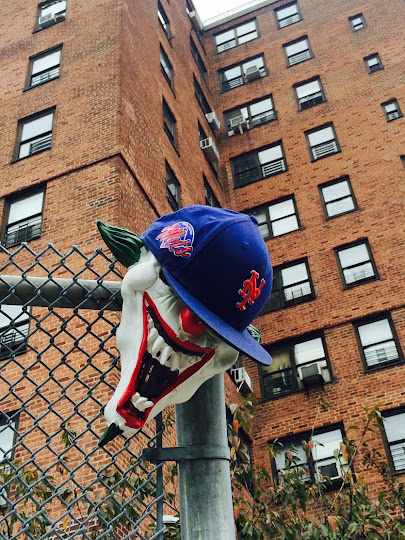 The Insane Mets Posse hanging it up on the FDR pedestrian bridge, Dave on 7th notes…
Posted by Grieve at 1:25 PM No comments:

Allright meat, show him your heat

This afternoon, for some reason, New York Mets knuckleballer (and all-around-nice-guy) R.A. Dickey was in Tompkins Square Park to watch people throw Wiffle balls... and interact with kids. And adults. 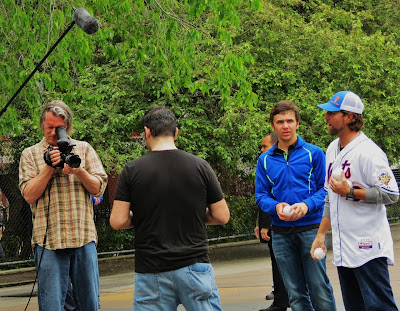 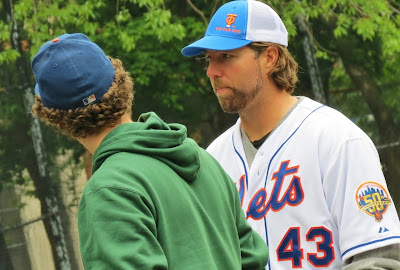 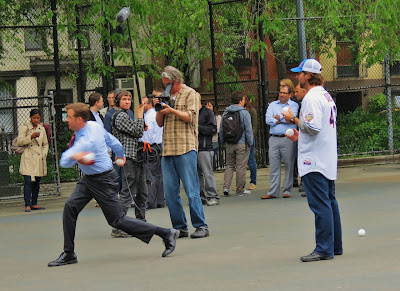 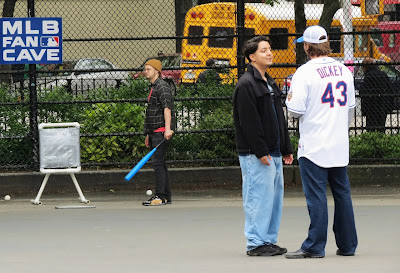 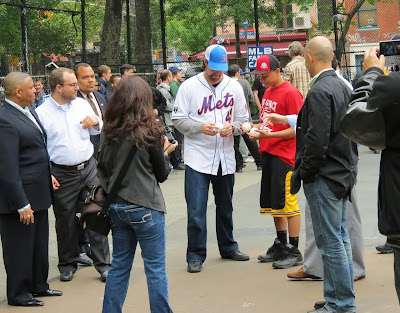 Above photos by Bobby Williams. 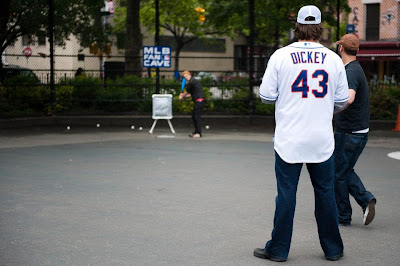 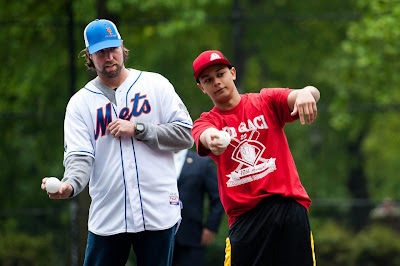 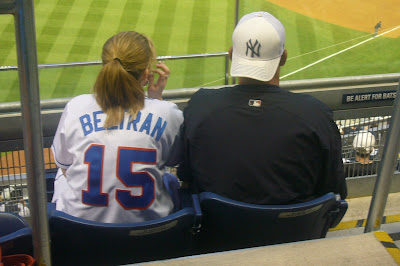 Posted by Grieve at 8:10 AM No comments: 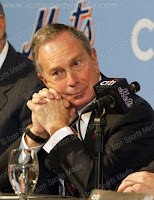 "THE class structure is alive and well in New York Major League Baseball. Both new stadiums have VIP areas where owners of the highest priced seats won't have to chafe elbows with the unwashed masses. The high rollers have their own entrances, their own bars, concession stands and restrooms that are off-limits to fans in the cheaper seats. At the Mets' home opener at glorious Citi Field Monday night, among those who took advantage of the exclusive Delta 360 Club were Mayor Bloomberg, Gov. Paterson, top cop Ray Kelly, Donald and Melania Trump, Drew Nieporent (who has a Nobu over left field), pharma billionaire Stewart Rahr, taxi banker Andrew Murstein, and Assembly Speaker Sheldon Silver, who was sharing the home-cooked chicken he brought."
Posted by Grieve at 6:00 AM 1 comment:

Now pitching for the Mets...

[Updated: Oops! Had the schedule wrong...Mets open at home NEXT Monday... They're in Cincinnati today...] 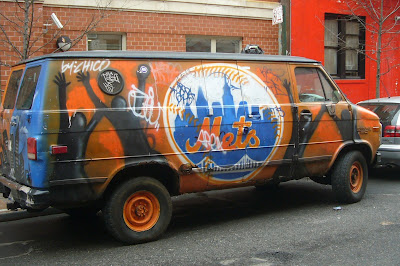 And if the bullpen car is to return, the van pictured above by Chico seen around the East Village gets our vote. I think JJ Putz will love it.

Definitely cooler than this. 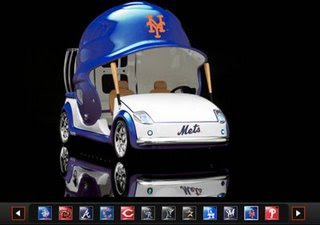 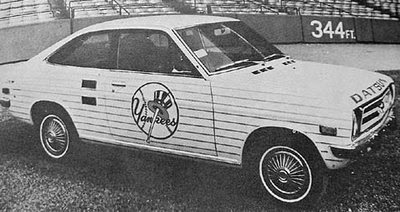 Two years ago, when the country's financial health was superficially strong, the Mets-Citigroup naming rights deal -- a record-cracking $20 million for 20 years to call the new ballpark Citi Field -- wasn't just gaudy, it was downright obscene.

Now, with Citi laying off thousands while reaching for billions in government bailout money, and with Citi's clients having taken a brutal beating, the declaration by the two parties that the ballpark naming deal will proceed as agreed upon is nauseating.

Two years ago, the $400 million deal to call the Mets' new stadium Citi Field was nothing better than an irresponsible vanity buy, one rooted less in advertising than in mad money beyond Madison Ave.

Today, that the deal will be sustained is no different than a welfare mother spending her family's subsistence money on booze, bracelets and the down payment on a brand new BMW.

If you're a typical sports fan -- you know, the kind who worries about gas prices, tuition and the trade deadline -- New York's new stadiums might look as if they belong behind a boutique window.

In the Bronx looms the skeleton of Yankee Stadium 2.0, a coliseum with half as many bleacher seats as its predecessor but more than three times the luxury boxes. In Queens, the Mets traded Shea's 20,420-seat hull of an upper deck for Citi Field and its 54 suites, burnished by leases priced firmly in the six figures. 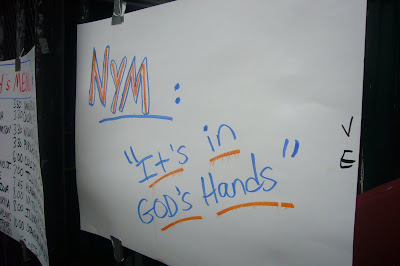 City businesses will reportedly miss out on making $141 million this fall because the Yankees failed to make the playoffs. How much will the city lose if the Mets lose today and miss the playoffs? (Oh, sorry -- I don't have the answer...just curious...)
Posted by Grieve at 10:14 AM No comments:

The Ziegfeld is a "movie palace," which is why the Mets game will be playing there tonight

First, a moment of appreciation for the Ziegfeld, one of two (the Paris Theatre on 58th) remaining single-screen movie theaters in Midtown. A rarity these days. As the Clearview Cinemas Web site notes:

The Ziegfeld Theatre was a Broadway theatre formerly located at the intersection of Sixth Avenue and 54th Street in Manhattan, New York City. It was built in 1927 and razed in 1966. The theatre was named for Florenz Ziegfeld, who built the theatre with financial backing from William Randolph Hearst.

The 'new' Zeigfeld Theater, built just a few hundred feet from the original Ziegfeld theater, opened in December 1969 and the movie house was one of the last big palaces built in the United States.

The theater features 1,169 seats, with 863 seats in the front section and 306 seats in the raised balcony section in the rear. The interior is decorated with sumptous red carpeting and abundant gold trim.

The Ziegfeld is, arguably, the last movie palace still showing films in Manhattan

Not to be Gloomy Grieve, but I do worry about this place. Aside from being a desired chunk of real estate in Midtown. It hasn't even been 1/5 full the last view times I've been there. (Granted, I'm not going to see, say, Iron Man, on opening night either.) I also enjoy their Hollywood Classics series.

So! What to make of this: The Mets-Phillies game is being shown there this evening. (This is becoming an annual event.)

As the press release for this evening's game at the theater touts, "Fans watching the action in larger-than-life style on the Ziegfeld's 50 foot x 23 foot viewing screen will participate in traditional Shea Stadium in-game entertainment and fan giveaways . . . Mr. Met and the Pepsi Party Patrol will also be on-hand to provide entertainment throughout the evening."

There will be beer sales and T-shirt launches too.
Posted by Grieve at 1:09 PM 4 comments:

NY baseball fans: "Some of them are also facing startling increases in ticket costs during a serious economic downturn" 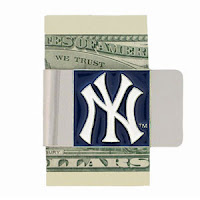 No American market has witnessed anything like it: two baseball teams and two football teams will open three new stadiums within 17 months and 20 miles of one another, with everything set to be in place by the fall of 2010.
But even as fans of the Mets, the Yankees, the Giants and the Jets look forward to state-of-the-art stadium architecture, better sightlines, wider concourses and more bathrooms, some of them are also facing startling increases in ticket costs during a serious economic downturn.

Previously on EV Grieve:
Even rich people can't afford to see the Mets or Yankees next season

Any bets that S.I. Yankees and Brooklyn Cyclones ticket prices go up as well?
Posted by Grieve at 10:23 AM No comments: 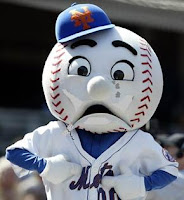 I've had several posts this summer about how expensive it will be to see the Yankees or Mets in their fancy-schmancy new stadiums next season. Well, the Mets just announced their 2009 ticket prices. How bad are they? Bad enough the Post made it part of its Page 1 cover package.

No wonder it's named after a bank - Met fans are going to have to open up their safe-deposit boxes to afford seats at Citi Field next season.
The choicest seats will cost $495 - a 79 percent increase.

On the lower level, where tickets at Shea were an average of $77 to $85 - depending on the opponent, day of the week and the Mets' five-tiered pricing system - comparable seats at Citi Field will average $150 to $225.

Michael Bakal, 27, of Baldwin, LI, hanging out at Virgil's in Midtown, expressed the frustration of many a Met fan.

"It costs more to put gas in the car, or to take the train, and now it costs more to get a seat in a stadium that we paid to build," Bakal said. "It's kind of insulting to New Yorkers. Go find the money somewhere else. Give us a break, leave Joe Public alone."
Posted by Grieve at 8:45 AM No comments: