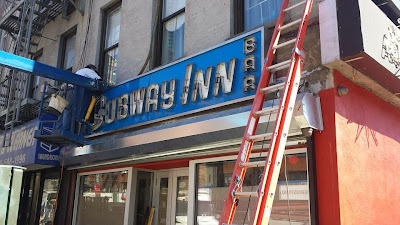 Leaving the neighborhood for a moment to relay some positive NYC bar-related news.

As previously reported, the bar had to vacate its home of 77 years on 60th and Lexington back in December to make way for new development via the World-wide Real Estate Group.

The same exact neon sign that hung for several decades now has a face lift and is ready to shine bright for many more years to come. And, before you ask us, yes that is the exact same Neon sign. The only difference is we painted the back using the same color as before. 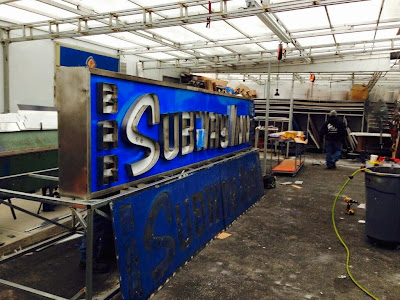 As for the rest of the bar, the Salinas family promised the following:

The space will look exactly the same. Colors, floor and all! In fact, our replication architect is hard at work making sure our new home will be nearly identical. Also, our prices will not change.

Photos of the bar in progress back that up. There's no word just yet on the official (re)opening date.

Previously on EV Grieve:
[Updated] Should we start worrying about the Subway Inn?

Subway Inn continues to live to serve another day 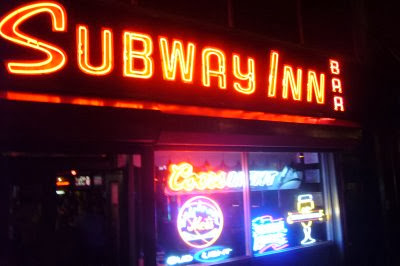 The Subway Inn is moving 2 blocks away

On behalf of my entire family-- I have some wonderful news to share. Earlier today we signed a long term lease on a new location which the Subway Inn will now call home.

On December 2nd, 2014 — the Subway Inn will close at its current location on 60th and Lexington Ave. to begin its relocation and REPLICATION (EXACTLY AS IT IS NOW) less than 2 blocks away on the same side of the street — at 60th and Second Avenue. Our move and REPLICATION is expected to take approximately 10 weeks to complete.

We had requested to remain in our current home til the end of the year so that none of our family members or employees would be without a job over the holiday season. Unfortunately, the landlord denied or plea.

We are excited about this development and have put the right team in place to make certain that every piece of furniture, including our famous neon signs, the current bar, every bar stool, even the original bar booths—(that Marilyn Monroe and Joe DiMaggio sat in) will make their way a stone’s throw down 60thStreet and be set back up exactly as you see it today.

And, it won’t just be the contents that will be the same. The space will look exactly the same. Colors, floor and all! In fact, our replication architect is hard at work making sure our new home will be nearly identical. Also, our prices will not change.

We realize this is a tremendous, risky undertaking, and will be very expensive to replicate — however my family is committed to keeping our tradition alive — and making sure Subway Inn lives on for many more generation’s to enjoy.

One final note — I would also like to take this opportunity to thank everyone from the bottom of my heart that supported my family and stood by us as we fought tirelessly to save our current home. While at the end of the day it may appear we lost the battle, rest assured this is not the case. Losing would have meant our home and memories would have been bulldozed.

While the four walls that will house our exact same contents may be changing—the heart and soul of what we call home will be the same. This will include the pictures of Charlie and my dad from years gone that will hang exactly where they are located now — just two block east.


Previously on EV Grieve:
[Updated] Should we start worrying about the Subway Inn?

Subway Inn continues to live to serve another day
Posted by Grieve at 5:03 AM 1 comment:

Subway Inn continues to live to serve another day

Heading out of the neighborhood for a sec ... Via the EVG inbox...

On behalf of the entire Salinas family, I would like to applaud Civil Court Judge Jennifer Schecter for her heroic decision earlier today, which for the second time in less than 10 days, stayed all eviction proceedings against our family business. I would also like to take this opportunity, to once again thank the thousands of New Yorkers who have signed our petition and have sent us notes of encouragement to help my family stay strong through this very trying ordeal.

What my family has learned through this struggle to save our business (which has been in our family for more than 4 decades) is that this fight had struck a nerve in the heart of many New Yorkers. This is no longer a fight JUST about my family and our livelihood, it is about saving the character and charm of Olde New York by preserving our building, which has served both famous as well as everyday day New Yorkers proudly for more than 77 years.

We also would to commend the work and support of the New York City’s Landmark Preservation Commission, Councilman Dan Garodnick, and State Senator Liz Krueger for standing behind our fight and their willingness to meet and help us as we continue to try to save this treasure.

Updated 4:23 p.m.
According to Eater, Subway's lease is up in February.

Updated 8/28
Here's an important update on the legal wrangling via DNAinfo ...

The World-Wide Group’s lawyer offered Oct. 21 as a new move-out date, but Subway Inn lawyers refused and asked for Nov. 30, saying it would take time for the Salinas family to find a new place to relocate their business.

Claude Castro, who represents Subway Inn, also asked that the Salinas family be able to take the decades-old neon sign, as well as the bar’s furniture when vacating the space. The World-Wide Group’s lawyer refused.


Previously on EV Grieve:
[Updated] Should we start worrying about the Subway Inn?

We started wondering about the fate of one of our favorite bars outside the neighbor back in February when a developer bought up a good part of East 60th Street between Third Avenue and Lexington, including the building that houses the Subway Inn.

Now we know. Via Gothamist, we learned this morning that the place will close next month.

Here's the message on the Subway Inn's Facebook page:

Subway Inn Patrons,
As you might know, Subway Inn was established in 1937, and has been proudly serving customers since.

We are sad to inform you that Subway Inn will be closed for business on or about the 15th of August. That's not to say we aren't opening another location. Subway Inn WILL be relocate.

Previously on EV Grieve:
[Updated] Should we start worrying about the Subway Inn?
Posted by Grieve at 12:37 PM 11 comments:

[Updated] Should we start worrying about the Subway Inn?

Venturing away from the neighborhood for a moment... The well-worn Subway Inn, with that perfect neon sign, has been in business on East 60th Street between Third Avenue and Lexington since 1937 ... however, recent real-estate transactions along here put its longterm future in this space in doubt.

The Real Deal reported yesterday that development firm World-Wide Group bought another building on this block across the street from Bloomingdale's.

The purchase ... gives World-Wide a total of about 300,000 square feet of development rights along East 60th Street, between Lexington and Third avenues, a source close to the deal said.

Nothing is imminent along here... but you have to figure some new project is likely in the pipeline. As The Real Deal pointed out, World-Wide "is active in the city." Among the firm's projects, a 59-story residential tower at 250 E. 57th St. Unless the firm just wants a 77-year-old bar in its portfolio.

So maybe you want to visit the Subway Inn in the coming months. At the right times (like, not a Friday night), it's still a great place. As Jeremiah Moss once wrote, "The Subway Inn will remind you of other bars that have been lost." 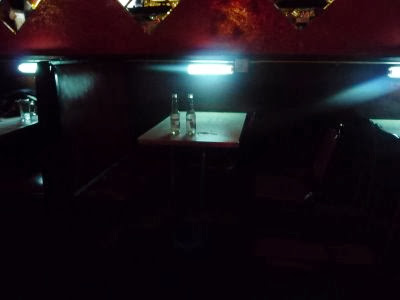 Updated 11:45
Gothamist spoke with the bar owner's son, who "seemed unperturbed by the news."

"We're probably going to end up moving somewhere else pretty close in the area. But right now it's not a concern, so we're not looking right now."

As the world ends: Subway Inn, now with Atomic Wings

Every so often we venture away from the neighborhood...

An EV Grieve reader reports on a recent visit to well-worn bar favorite the Subway Inn on East 60th Street near Lexington ... And?

Anyway, we haven't been here since last December. So we paid another visit... Pretty typical crowd here and now. Off-duty Bloomingdale's workers. Several tourists. A rummy or two. That one guy singing along to Fleetwood Mac. And the jukebox wasn't even on.

Not sure when this happened, but Subway Inn has apparently teamed up with Atomic Wings ... 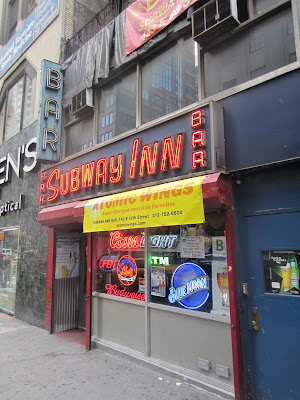 You can have them delivered right to your table. 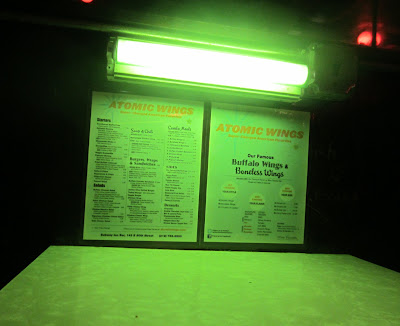 A convenience for hungry Subway Inners or the end of the world?

Given the news that the Holland Bar may be closed for good, it's time to tip our hat to some of the like-minded bars in the city. (Dive bars. Lonely old man bars. Whatever you prefer!) Such as the well-traveled Subway Inn. 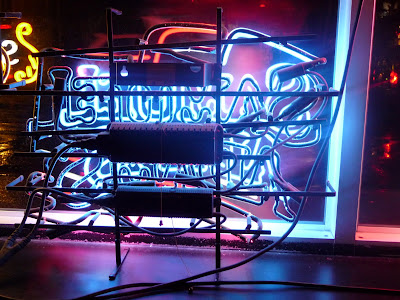 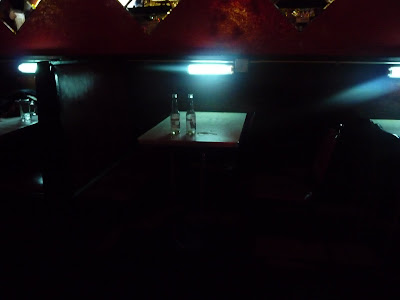 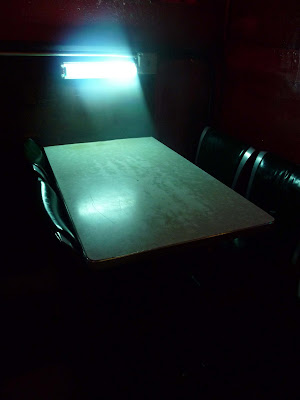 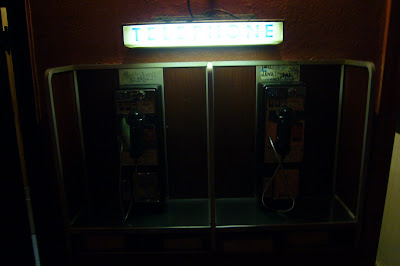 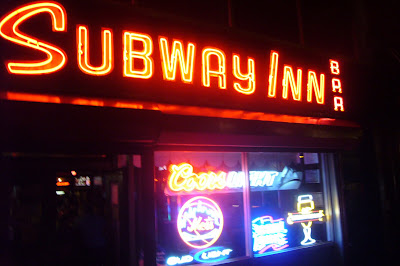 Related:
Ken Mac has some excellent shots of the Inn here.
Posted by Grieve at 11:54 AM 6 comments: