Do you have rats ready for their closeup? 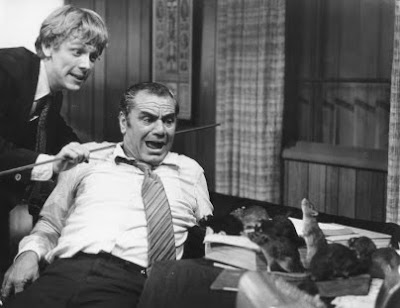 From the EV Grieve inbox...and this is legit -- I exchanged e-mails with one of the assistant producers...

Wanted: if you have a rat problem, a new tv series will help for free (Manhattan, Queens, Bk, Bx, SI)
A new documentary science show on rats in the 5 boroughs is currently in production. We'll set you up with an accredited local pest control company that will tackle your rat problem FOR FREE, and follow the process of making your home or business rat-free. All correspondence will be kept strictly confidential AND we won’t even need to mention or show the name or location of your business or home/apt.

E-mail: sciencetvshow@gmail.com to find out more.

Email ThisBlogThis!Share to TwitterShare to FacebookShare to Pinterest
Labels: rats, TV shows we may actually watch

Yesterday's big news was, of course, that there was some window washing happening at E2E4. Also! It was reported that Robert DeNiro and Spike Lee were teaming up to produce a TV show called "Alphaville" set in the East Village. As Reuters noted:

Set during the 1980s, the drama will re-create the neighborhood's mix of struggling artists and musicians living alongside Puerto Rican and black families. Along with its growing bohemian and celebrity population, which also included graffiti artists, break-dancers, rappers and DJs, the neighborhood was plagued by illegal drug activity and violent crime.

Perhaps it will be a little like 1984's "Alphabet City," but a little more Spike Lee-er-er.

However, based on this reel that DeNiro and Lee created to pitch the network executives — given to me exclusively — the series promises to have more of a German synthpop feel.

"The Unusuals" is one of the many TV shows to be filmed around the neighborhood in recent months. It debuts tonight on ABC in the former "Life on Marzzzzz" slot.

The quirkiness surrounding police work is hardly new, but that's the shaky foundation for "The Unusuals" -- a puzzling ABC series seemingly predicated on the notion that New York detectives are every bit as eccentric as the perps they take off the streets. The premiere represents an uneven introduction to the denizens of the second precinct, with -- to hark back to the "Blues," as in "Hill Street" and "NYPD" -- an ensemble heavily tilted toward Belkers and Medavoys. So while the show does qualify as slightly unusual, its ability to be consistently interesting is another matter.

Email ThisBlogThis!Share to TwitterShare to FacebookShare to Pinterest
Labels: filming around Tompkins Square Park, Life on Mars, The Unusuals, TV shows we may actually watch 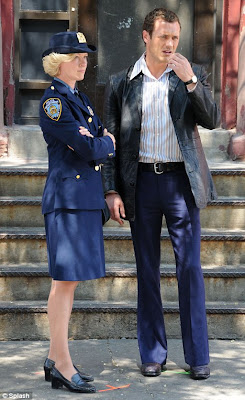 Tonight at 10, we will bravely soldier on and watch "Life on Mars."

Meanwhile, Hunter-Gatherer, an aficionado of classic TV from here and abroad, weighs in today on the U.S. version of "Mars":

Hollywood, ladies and gentlemen, is now officially out of ideas. The first two episodes borrow so heavily from the UK version that one wonders at first if ABC bothered hiring writers at all for the domestic offering. But after watching a bit of the show I quickly realized that dialogue this flacid could only be made in the good old USA. Is there such a thing as TV karaoke?
I love Harvey Keitel, and I really like Michael Imperioli and Gretchen Mol. But good actors as they are, they are all hogtied by a dreadful script that attempts to Americanize a UK concept for pablumesque primetime consumption. In this portrayal of life in 1973, howlers reign supreme and Michael Imperioli’s character, Det. Ray Carling, leads the cavalcade of cringe with lines like “he’s as crazy as a fruit bat at a cranberry convention” ……….wow.

And HG ends with a sensible question: "[W]hy not just show the original series?"

Episode 2 review of Life on Marzzzzzzz (a 10-second review)

So! Week two. Better than the first. But it already seems tired after just two episodes. Keitel's ball-busting routine is getting old. Sam Tyler (Jason O'Mara) has the personality of a salami. (And he really wasn't going to eat that vegetable lasagna?) When is he going to loosen up and have some fun? Why not look up his parents? Something! Will give it one more week...

Now something much more entertaining: The Ukulele Orchestra of Great Britain does "Life on Mars."

Life on Marzzzzzzz (a 20-second review) As mentioned previously, "Life on Mars" made its debut last night. I'm not much of a prime-time TV person. But! I tuned in anyway. Was a little more curious about the show than I needed to be. So you know the premise: Present-day NYC detective finds himself back in time in "gritty" 1973 Manhattan.

For starters, the lead fellow Sam Tyler (Jason O'Mara) is an annoying mix of Mel Gibson and, oh, Michael Sarrazin. Without getting into all the plot points, I understand the confusion...the anger...the feeling of helplessness that he felt, trapped in 1973 NYC while the eldest Cosby kid (Lisa Bonet!) is in peril in 2008.

Savor the opportunity...revisit a now-vanished bar...go to the top of the World Trade Center (which they showed twice...)....Buy up a ton of buildings in Soho and become a real-estate baron!

Plus, I had so many questions...Did he travel back with money? They showed his East Village apartment...Where did he eat breakfast? Lunch? Dinner? Why wasn't anyone smoking during the scene inside 7B? Why did all the extras look like players from a summer stock production of Hair?

OK, this was only the first episode...maybe all this is explored in the coming weeks. I'll give it a another shot next week.

P.S.
I'll leave the critique of co-star Gretchen Mol to someone more qualified ...
Posted by Grieve at 11:32 AM 5 comments:

Oscar winner Martin Scorsese is in negotiations to direct HBO's drama pilot "Boardwalk Empire." Scorsese already is exec producer on the project, based on Nelson Johnson's book, which chronicles the 1920s origins of gambling mecca Atlantic City. [Hollywood Reporter, via MediaBistro]
Posted by Grieve at 9:06 AM No comments: