Why The Robyn is a deal

However, the listing for the building between Avenue C and Avenue D didn't have a price listed.

According to Crain's, the asking price is $26.3 million. And this is being billed as a deal, at least according to the broker, Cushman & Wakefield's James Nelson.

Mr. Nelson noted that the building, even though it is newly constructed, will likely sell at a discount, per square foot, compared with a recently sold prewar walk-up in the neighborhood at 117-119 E. Seventh St. That building sold for about $1,300 per square foot in June. Mr. Nelson is expecting to fetch less than that amount for 316-318 E. Third St.— about $1,100 per square foot.

"Living rooms are a fast-disappearing amenity in apartments in the East Village and other neighborhoods where young renters like to go," Mr. Nelson said. "Living rooms don't create revenue, but bedrooms do. That's why my building is unexpectedly cheaper. It has living rooms."

Email ThisBlogThis!Share to TwitterShare to FacebookShare to Pinterest
Labels: deals, The Robyn

Put all your eggs together and buy The Robyn 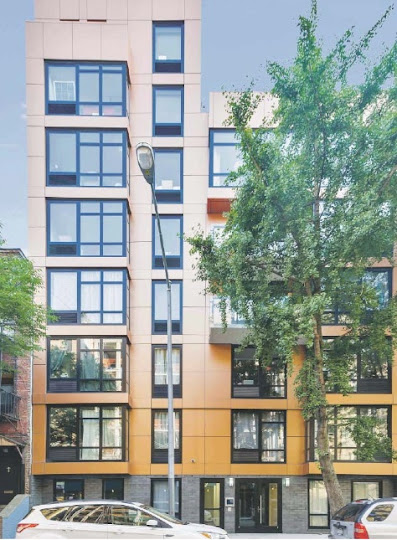 Now the whole building between Avenue C and Avenue D has arrived on the market.

Here's the listing via Cushman & Wakefield:

The building, known as “The Robyn,” was completed in 2014 using high quality, energy-efficient materials and features a virtual doorman, video security, and a common patio. Each apartment features stainless steel appliances and granite kitchens, baths, and in-unit washer/dryers. In addition, multiple residences feature private outdoor space. The building is 100% leased at a below market average in-place rent of $59/NSF.

The property benefits from a 421a tax abatement with eight years remaining. The building is centrally located in the East Village and within steps of the Lower East side providing a tremendous variety of the city’s best restaurants and nightlife. It is also steps from the 14D bus stop and four blocks from the F train stop at 2nd Avenue. This is an excellent opportunity for an investor to purchase a high cash flowing, low maintenance asset in the heart of the East Village.

No word on the price in the listing.

And is East Third Street between Avenue C and Avenue D really "in the heart of the East Village" like the listing says? (You actually don't have to answer that.)

The lot was formerly home to a single-family residence. Preservation groups to try to protect the circa-1835 house from demolition, but the Landmarks Preservation Commission rejected a hearing.

This Robyn laid some luxury apartments on East 3rd Street; pet spa included
Posted by Grieve at 4:20 AM 3 comments:

The Robyn is now fully exposed on East 3rd Street 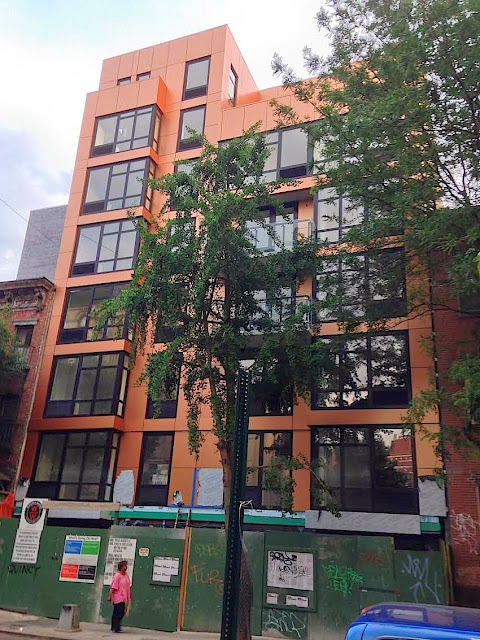 Workers recently removed the construction netting and scaffolding at the new 33-unit rental at 316 E. Third St. between Avenue C and Avenue D ... offering the first look at The Robyn, named after nothing in particular.

Apartments at the Karl Fischer-designed building range in price from $2,100 for studios, $2,495 and up for one bedrooms and $3,375 and up for the duplex penthouses. Reps for the broker told us last month that 29 of the 33 united had been rented.

The elevator building features a roof deck, storage units, bike storage and a pet spa, among other amenities.

Meanwhile, the view from higher up… via EVG reader Bobby G. 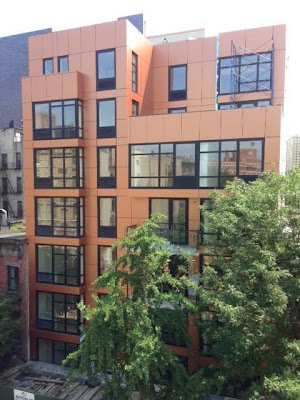 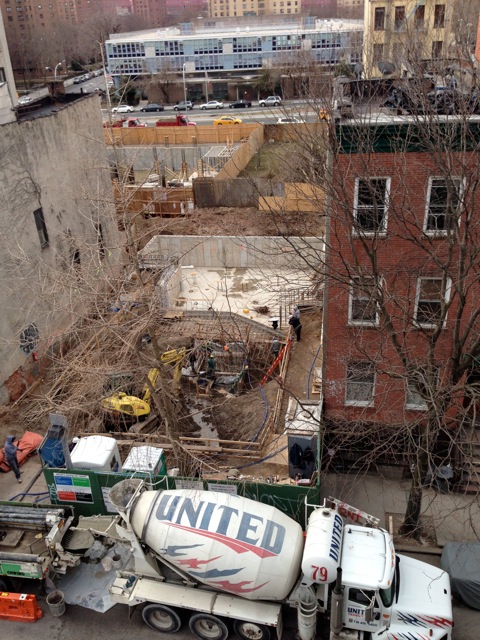 [Updated] People apparently really want to live in The Robyn 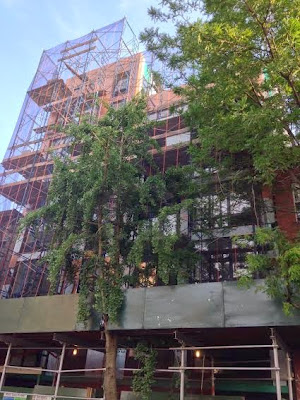 Back in late May, we received a news release announcing that Miron Properties was hired to lease The Robyn, the incoming 33-unit rental at 316 E. Third St. between Avenue C and Avenue D.

We received a follow-up announcement from Miron reps stating that they have rented 29 of the 33 apartments ... with move ins starting July 1, pending the city issuing the Temporary Certificate of Occupancy.

Not bad on all the rentals considering the building isn't even finished ... so these leases are being signed without people seeing the actual apartments.

Apartments at the Karl Fischer-designed building range in price from $2,100 for studios, $2,495 and up for one bedrooms and $3,375 and up for the duplex penthouses.

The elevator building features a roof deck, storage units, bike storage and a pet spa, among other amenities.

And what's up with that name, The Robyn?

Turns out that the building is named after the wife of Jona Rechnitz, founder and president of JSR Capital, the real-estate development and management company that bought the property several years ago.

Updated 6/25
The folks from Miron provided incorrect information about the name. It is just a generic name the developers came up with for the building.

This Robyn laid some luxury apartments on East 3rd Street; pet spa included
Posted by Grieve at 5:00 AM 4 comments: 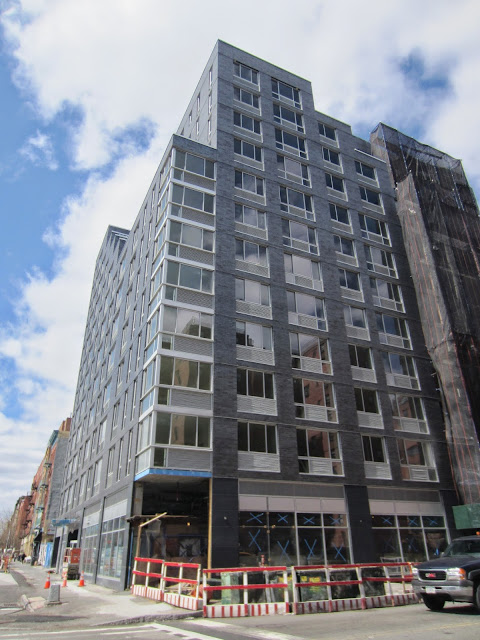 Well, it turns out that Alphabet Plaza, the 12-story mixed-used apartment building going up at East Houston and Avenue D, is actually going by a different name now. (Early reports about the development referred to it as Alphabet Plaza.)

Yesterday, workers dropped a banner on the side of the building. Say hello to The Adele! 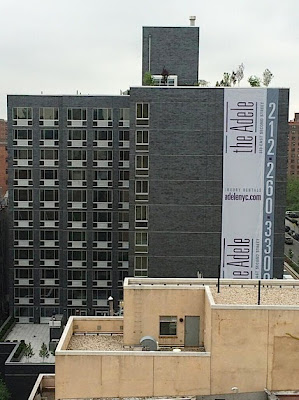 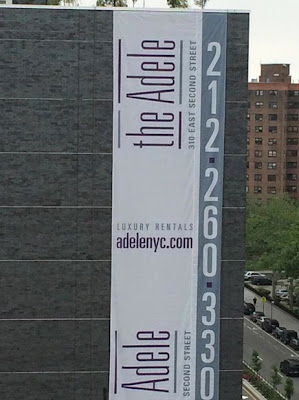 The banner lists a website, though at this point, it's just a placeholder … noting that "luxury rentals" will be coming this summer. There isn't any pricing yet.

And this appears to be The Adele's slogan:

"In a city where everyone is always going somewhere, you’ll already be there."

While wrapping your head around that, here are some of the building's previously reported amenities, such as a 24-hour doorman, valet services (laundry drop-off and pick-up), fitness center, residents lounge, landscaped roof decks (where you can watch the Skyfall?) and bike storage. In total, there will be 135 units here, 30 of them affordable.

The homage to a successful pop singer can't be ignored. So now we have The Adele, named maybe for the English singer-songwriter, joining another neighboring new building The Robyn, named maybe for the Swedish pop star, at 316 E. Third St. Maybe they'll be a push for The Madonna for old time's sake one of these days?

Here are details on applying for one of the 30 affordable units in Alphabet Plaza
Posted by Grieve at 5:30 AM 9 comments:

Email ThisBlogThis!Share to TwitterShare to FacebookShare to Pinterest
Labels: Alphabet Plaza, The Adele, The Robyn 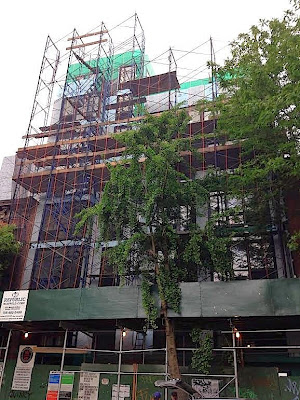 Miron Properties, a full-service, real-estate brokerage firm ... announces it has been retained by developers David Amirian, Eric Brody and Joseph Klaynberg, along with JSR Capital to lease and manage The Robyn, a modern new construction rental development located at 316 East 3rd Street in the East Village. The leasing office opens next week and renting will begin immediately.

The Robyn, built by Wonder Works Construction, is a 33-unit, 8 story building designed by architect Karl Fischer comprised of 12 studios, 17 1BRs and 4 duplex penthouse 2BRs, with private outdoor terraces, including double height living room space. They range in price from: $2,100 and up for studios, $2,495 and up for 1BRs, and $3,375, and up for the duplex penthouses.

“The area is gentrifying and with all that is going on with the neighborhood, we are very excited to bring this on as a new addition,” says David Amirian, developer.

And here is The Robyn website … where you can learn more about, uh, The Robyn … (anyone care to explain that name and its connection to the neighborhood?) …

And this seems to be the only interior shot so far…

So, to recap some recent history here, where a lovely home with gardens stood for nearly 177 years just a few storefronts to the west of Avenue D…

Workers finished demolishing the house in March 2012. The home was last owned by Barden Prisant, a former member of Community Board 3, who now lives in Brooklyn.

According to an article on living in Prospect Park South in the Times dated Oct. 6, 2011, Prisant and his wife "decided to sell their house in the East Village because a tall building was to go up next to their beloved backyard." (The in-progress Alphabet Plaza.)

Preservation groups to try to protect the circa-1835 house here, but the Landmarks Preservation Commission rejected a hearing. 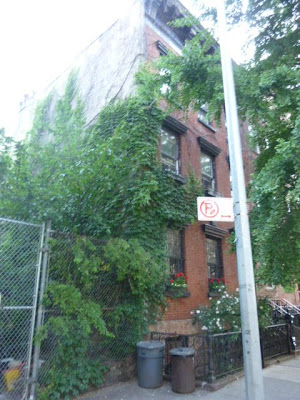 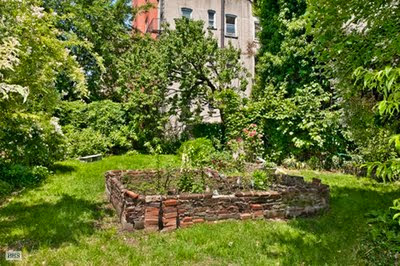 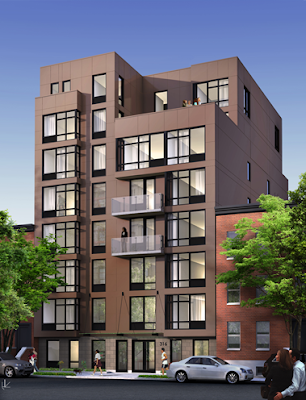 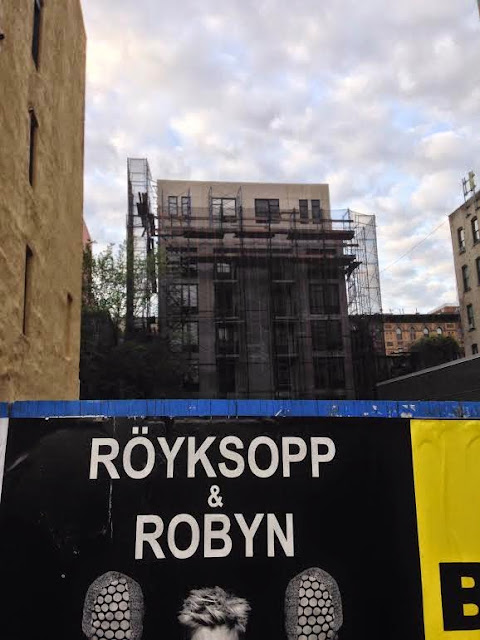