Well, outside our usual coverage area... But, a tipster sent along these photos from 4 a.m. outside Tonic East on Third Avenue at 29th Street, a three-level behemoth that Eater described as "a loudmouth bar."

We have no idea what happened. A fight? A fall? 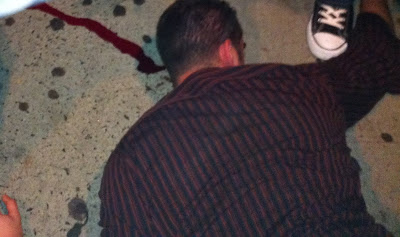 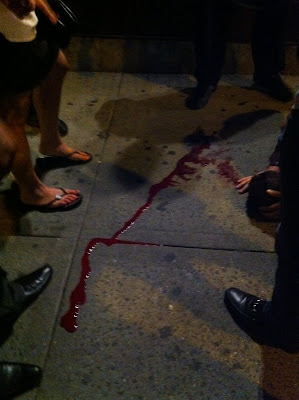 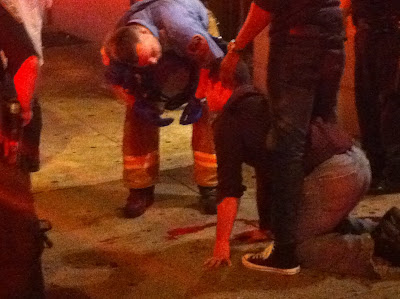 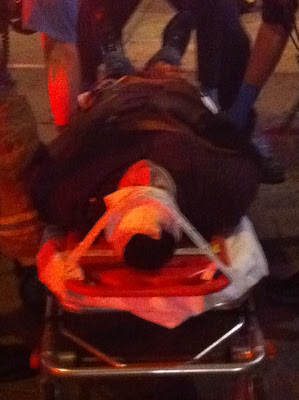 Anyway, aren't you glad that we don't have bars like this in the East Village? Oh, wait...

[Updated: The tipster said that this was the result of a fistfight... this fellow got the worst of it, obviously]
Posted by Grieve at 8:50 AM 4 comments:

Drink your hangover away at DTs and rock!

On the post here Monday titled, Whatever happened to simple bar names... and concepts?, several of you left some suggestions for other potential future bar names/concepts hereabouts to sit alongside the real new bars coming like the 13th Step and SRO:

-- I'm opening up a bar called "Generation O" -- a themed bar with huge shopping bags plastered on the wall and stiletto heels hanging from the ceiling, where the patrons can only view the bar drinks and menu through their ipads, itouch, and iphone, and the orders must either be tweeted or texted to the bartenders and waitresses... (Esquared)

-- I was thinking of opening a Bowery bar called "the needle exchange". People can only come in if they're are wearing something from Mugatu's Derelicte collection. See you all there. Free condoms for all! (Vazco)

-- Maybe going with the suburbanization concept, a bar called Lawnboy. It's covered in plastic grass, comes with ride-on mower rides, sprinklers for running through, badminton. And the drink special? The Mulch. Kind of like a Mudslide, but with chunks of artisanal chocolate bark floating in it. (Jeremiah Moss)

-- I used to joke about opening a bar called Urban Asshole...now the idea doesn't seem so funny. (Goggla)

-- I must confess I am very close to opening a mini-chain of my own theme bars. The first one will be called "DTs" as an homage to delirium tremens. The second will have Indian tapas and beers. The servers will all wear dark sunglasses at all times. I'll have as many Indian liquors as possible and my mixologists are working on perfecting some exclusive drinks. Fogcutter, Blindsider, Carbide Cocktail, HK (for Helen Keller) are all in the running. I'm going to call it "Bhopal". This place will STEAM! Trust me. (Upstate Johnny G)

-- Wouldn't the ultimate ironic downtown bar name be something like "Douchebag's" and how long before that comes to pass. (Anonynmous)

Meanwhile, please don't blame me when, say, a place called The Needle Exchange shows up on the CB3/SLA docket this fall...

Hold on. Bounce Deuce at Second Avenue and Sixth Street is closed.... but perhaps not dead. And there's a new work permit on the door. Something about expanding a fire exit. 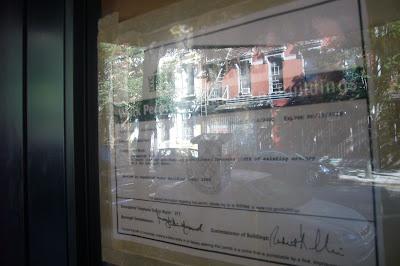 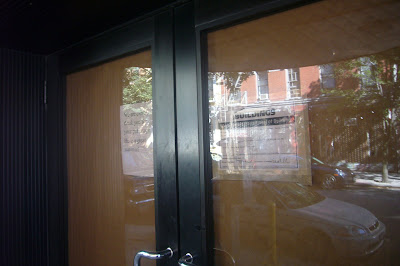 And there's new paper on the windows.... 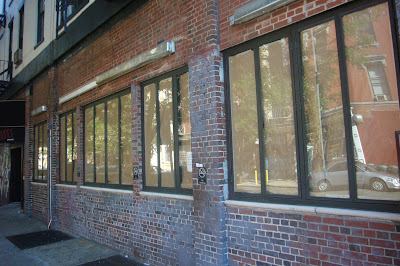 ...and all the furniture is still inside. It just doesn't look (yet?) like a joint that's closing. Except the part about not being open. And those 71 violation points. 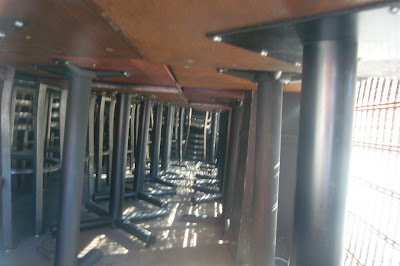 When the place shuttered, the signs did just say "Have a great summer!" Back in time for football season?

P.S.
However, no signs of the beer tubes.
Posted by Grieve at 6:43 AM No comments: 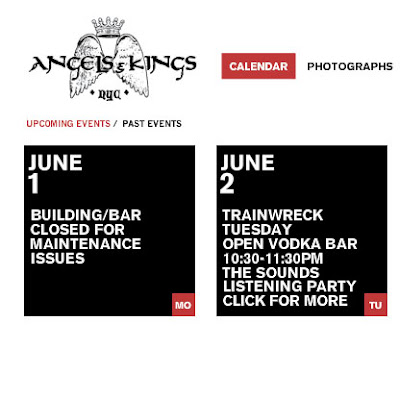 Such as peeling off notices from the NYPD? 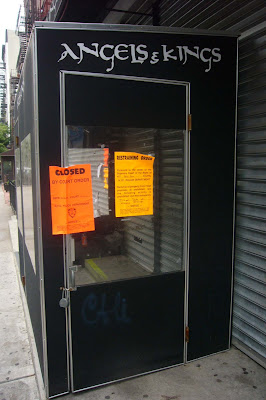 As Gawker reported last night, Angels & Kings on 11th Street near Avenue A was shut down for serving minors & morons. Pete Wentz is one of the bar's owners.

Anyway, when the bar opened in May 2007, Joshua Stein filed the following report on Gawker.

When emo-troubadour Pete Wentz opened Angels and Kings, a bar in the East Village, our douche canary in our douche mineshaft keeled over and died. First of all, Pete Wentz is going to be there. As he tells Page Six: "Yeah, I'm just gonna be local and drink umbrella drinks." So this isn't your normal dive. According to one of his business partners, this is a dive where "anyone can go and have sex in the bathroom and not get in trouble." So it's located in international waters? 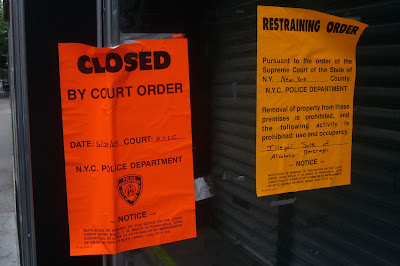