Mid-morning photo of a dog photo 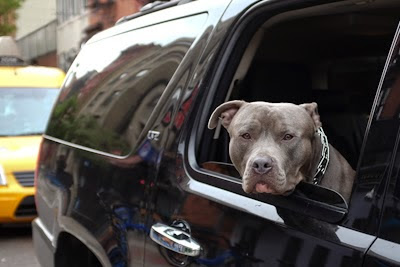 Photo yesterday on East Fourth Street by Derek Berg
Posted by Grieve at 10:22 AM 2 comments: 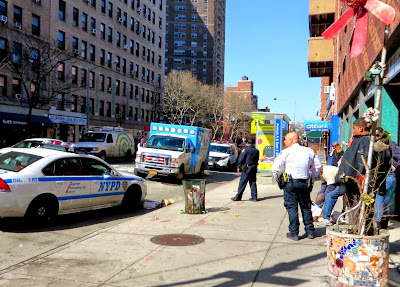 We don't have all the details on this incident this afternoon on Avenue A and East Third Street (we heard about it from several people) … Here's one version:

[There was] a pit bull attack on Avenue A, on a small black-and-white dog. Despite people throwing garbage and a garbage can at it, the bull would not release its grip. Multiple cops came, dog's owners appeared to not give a fuck, and the little dog's owner went into shock and an ambulance was called for her.

Anyone else witness this?

Updated 9:08 p.m.: We heard from the owner of the dog that was attacked… the puppy is doing OK

The owner of Dante, a 1-year-old Yorkipoo, shared her version of the incident:

We were walking on Avenue A when a pit bull on a leash on the other side of the sidewalk made a beeline for Dante. He grabbed Dante's neck, and with a locked jaw kept thrashing him about and would not let go. My husband and I just tried to pull the dog off — a crowd was forming and the dog's walker said he was sorry but he couldn't do anything — it wasn't his dog.

People kept yelling for him to kick his dog, to do something — I don't know what he should have done ... but standing around saying he couldn't do anything probably wasn't it. Then at one point he said something like, "oh gosh, the dog is dead" or "it just killed a dog." That's when I had to turn away ... it didn't seem like we were going to be able to get the dog to let go and it looked as if Dante's neck was about to be ripped apart.

Then, somehow Dante gets free and everyone thinks he's dead. My husband felt a very faint heartbeat but he was lifeless in my arms — not moving for a few minutes. I start to run to the Lower East Side Animal Hospital but some amazing people from the Ruff Club [at 34 Avenue A] ushered me inside. That's when Dante started to move a bit, pick his head up. Poor thing was shaking and in shock. He ended up having a bite and needs to be in a cone, receive some medicine, etc., but the vet said Dante is very lucky. The people at the Ruff Club were beyond awesome — they stayed with us, checked on Dante, gave us advice and clearly cared a lot.

My husband got a small cut and I got bit, though it isn't too deep. We found out that the pit bull did not have his rabies shots and now my husband and I need to go through a series of rabies shots over the next month. 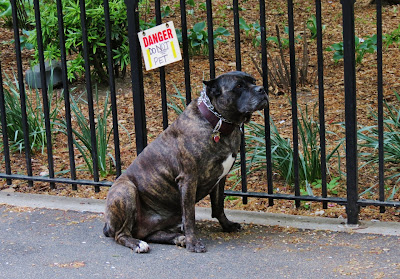 Photo by Bobby Williams.
Posted by Grieve at 8:43 PM 3 comments:

Today in photos of large dogs in Tompkins Square Park 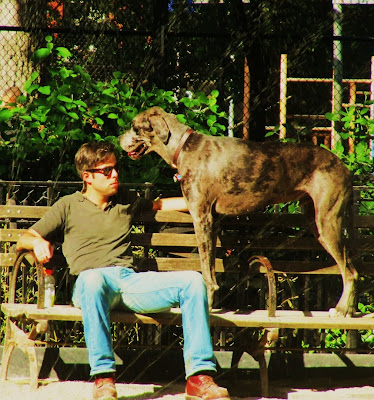 By Bobby Williams
Posted by Grieve at 7:52 PM 3 comments: 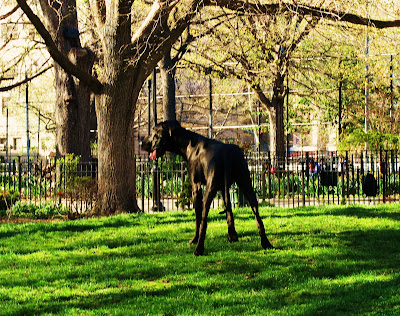 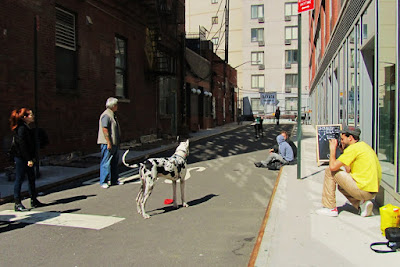 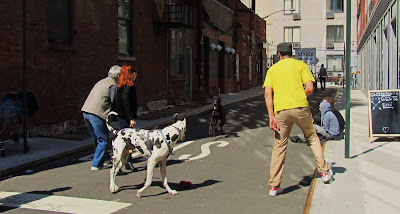 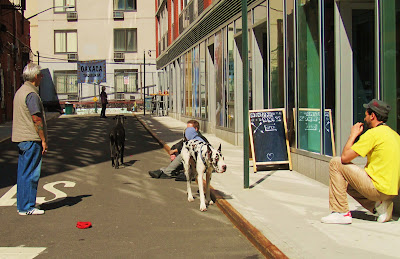 Flashback to the previous weekend! 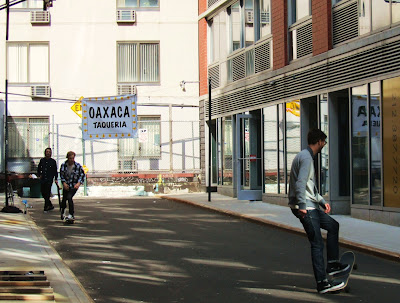 Won't be able to do this once THIS happens.... 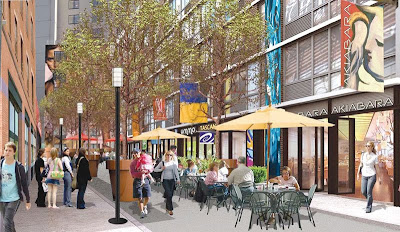 And I just happened to be walking by St. Patrick's on Fifth Avenue yesterday afternoon. (Oh -- Easter was last Sunday?) I took these photos after a mass, though I don't think they're of Dolan. 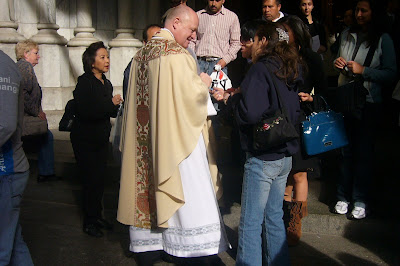 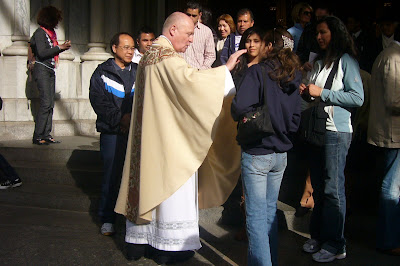 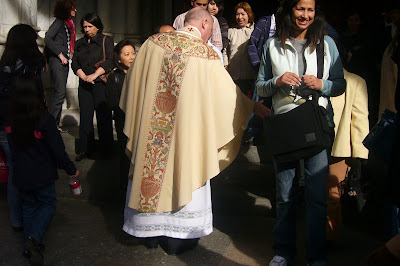 Why? Because more people would have been taking pictures of him rather than this! You should have seen the Great Dane parked out front of St. Patrick's! A photo frenzy! 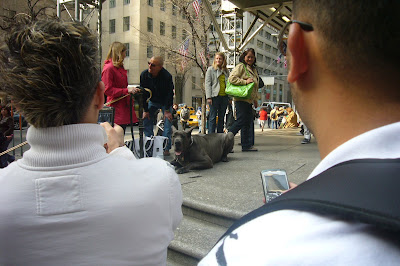 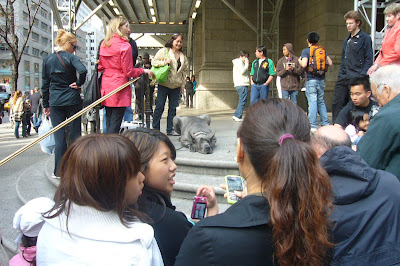 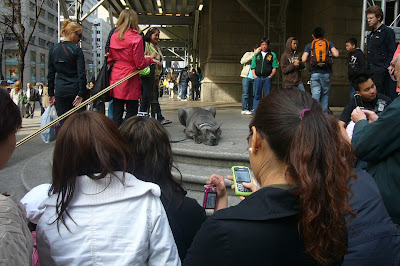 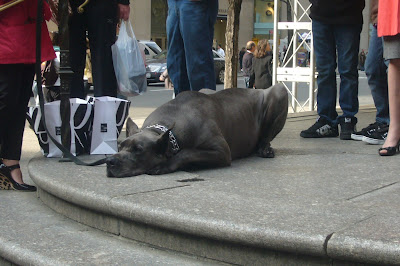 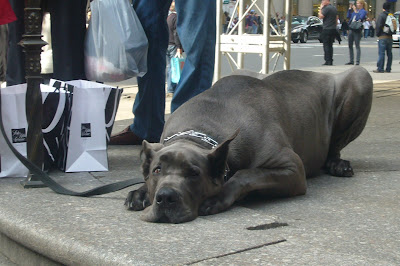 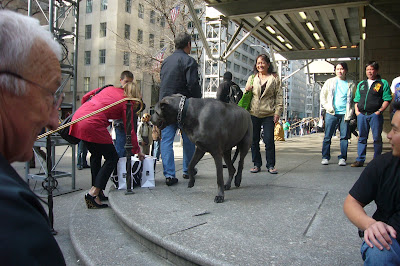