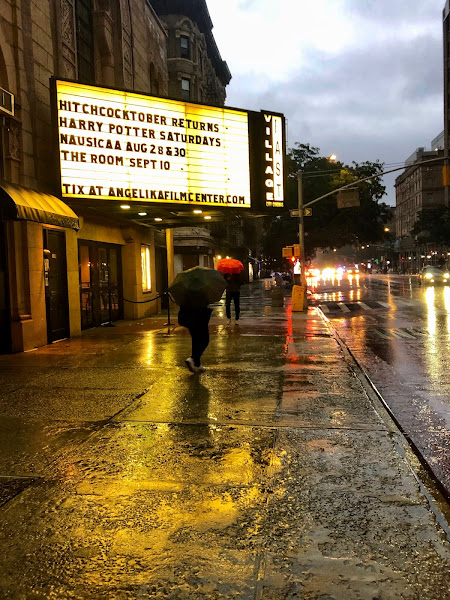 Right before the heavy rain moved into the area this evening... all sorts of warnings tonight from the remnants of Ida — a Severe Thunderstorm Warning until 10:30 ... Flash Flood Warning until 11:30.
And Hitchcocktober returns to 12th Street and Second Avenue!
And updated...

Email ThisBlogThis!Share to TwitterShare to FacebookShare to Pinterest
Labels: weather 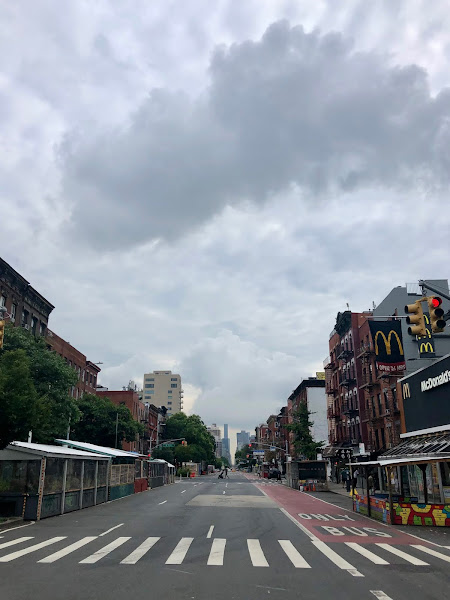 We're officially on storm watch, as this random photo from First Avenue and Sixth Street doesn't really show.
As of 11 a.m., Henri is now a hurricane, and warnings have been issued for parts of Long Island, Connecticut and Rhode Island...

#Henri has strengthened to a hurricane and is headed for Long Island and southern New England. Hurricane and Tropical Storm Warnings have been extended eastward. Here are the 11 am EDT Key Messages. See https://t.co/tW4KeFW0gB for details. pic.twitter.com/lRb61AnHaj

In NYC, we're under a tropical storm warning... with strong winds and heavy rains arriving overnight...

We are continuing to monitor Tropical Storm Henri. Here’s the latest:

-New York City is under a Tropical Storm Warning. We expect strong winds and rain to begin late tonight and last through tomorrow.

Gothamist has a nice recap of all this here.
Headline H/T
Posted by Grieve at 1:00 PM 3 comments:

How can I really be expected to post today when New York will be a snowy, freezing hell this weekend? 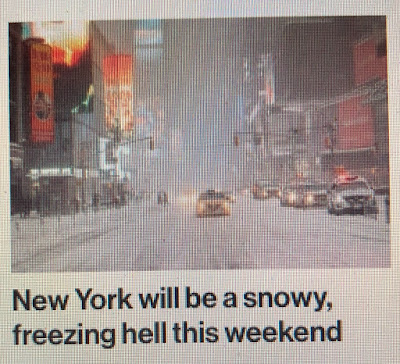 And what the paper reports about the weather possibilities:

A fast-moving storm will dump an inch of snow an hour on the city starting at 6 p.m. Saturday and possibly into Sunday, when rain — and then an arctic blast — will turn the Big Apple into a treacherous tundra.

Flakes will fall “hard and quick” before turning to rain sometime between midnight and 3 a.m. Sunday, meteorologists said.

And another take with illustrations...

The NWS has issued a Winter Storm Watch for NYC. Our NY1 official forecast is for 2-4" of snow with snow changing to rain, followed by a flash freeze Sunday night. Conditions will be changeable. pic.twitter.com/Rx8YSJt3SD

Perhaps the biggest weather story unfolding for NYC is the Dangerous Cold on the way. Snow Saturday night could accumulate briefly but look at the Arctic Blast that arrives Sunday night and peaks on Monday. pic.twitter.com/118nSyRBtQ

The area is currently under a Winter Weather Watch. There is a 90 percent chance of unbridled media hysteria and random grocery purchases.

Previously on EV Grieve:
How can I really be expected to post today when the Storm of Feb. 9™ is here?

How can I really be expected to post today when heavy thunderstorms are likely on the way?

How can I really be expected to post today when 78 degrees™ is on the way?
Posted by Grieve at 6:30 AM No comments:

This alert is making the rounds... 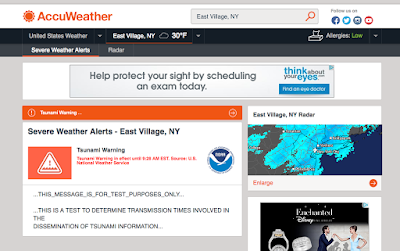 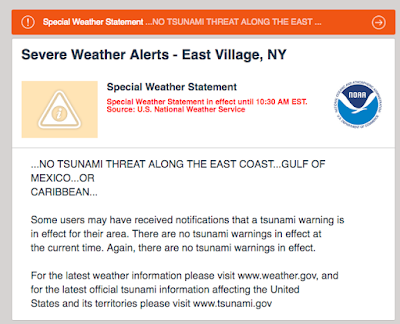 Via the EVG inbox this evening...

The New York City Emergency Management Department today issued a hazardous travel advisory for Tuesday, March, 14. The National Weather Service has issued a Blizzard Watch in effect from late Monday night through late Tuesday night. A nor’easter is forecast to bring heavy snow along with strong and potentially damaging winds that will create hazardous travel conditions on Tuesday.

“We’re preparing for a significant storm on Tuesday, and New Yorkers should also prepare for snow and dangerous road conditions,” said Mayor Bill de Blasio. “Besides the snow, it will be cold. We urge you to avoid unnecessary travel and help keep roads clear for Sanitation crews and first responders.”

“Heavy snow will make travel difficult on Tuesday. New Yorkers should avoid driving and use mass transit when possible,” said NYC Emergency Management Commissioner Joseph Esposito. “We are working closely with our agency partners to coordinate the City’s preparations for the storm.”

A low pressure system develops off of the Carolina coastline Monday before making its way up the East Coast late Monday night. According to the latest forecast, light snow is expected to begin late Monday night, and will intensify overnight into early Tuesday morning. The heaviest snowfall is expected Tuesday morning through the afternoon, with rates as much as 2 to 4 inches per hour possible. Strong winds are expected to accompany the heavy snowfall, with wind speeds 20 – 30 mph, and gusts 35 – 50 mph, creating hazardous travel conditions. The snowfall is expected to taper off Tuesday evening. A total accumulation of 12 to 18 inches is anticipated, but locally higher amounts are possible. New Yorkers should avoid driving and use mass transit where possible on Tuesday.

And in case you are playing NYC weather trivia...

It is not uncommon for significant snow to fall in March in #NYC. Here are the top 5 snowfalls March 1 or later since 1869. pic.twitter.com/dCDU9NiUOA

It is nice out today 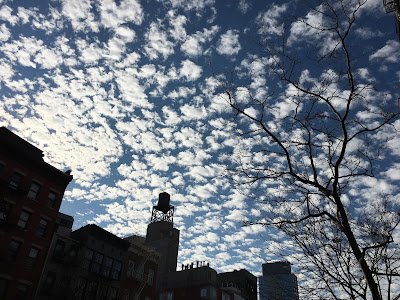 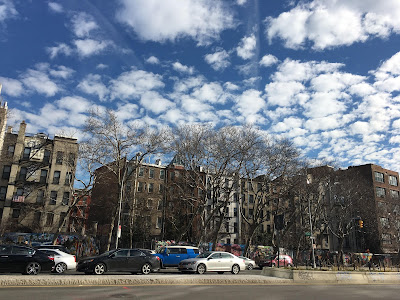 ...a little earlier this morning in Tompkins Square Park... 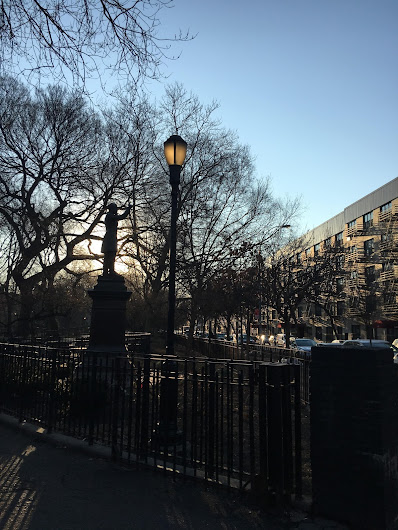 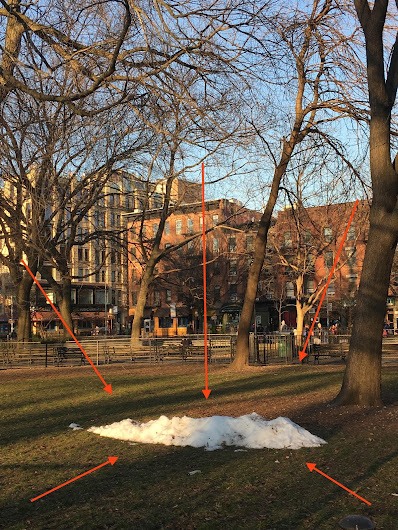 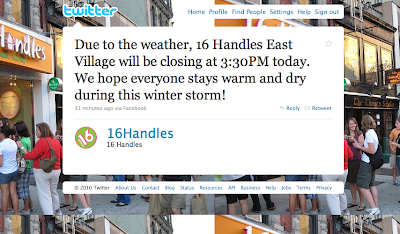