The Evolution continues to evolve (sort of) 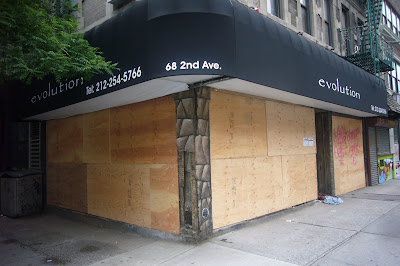 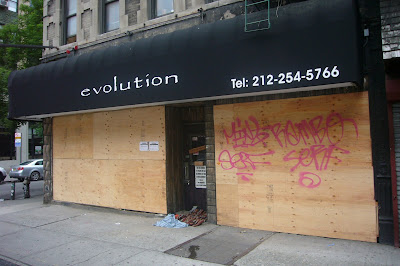 At Second Avenue and Fourth Street. Can't wait to see what the next incarnation of this space is...

Oh! Turns out that I don't have to wait long.... Hunter-Gatherer, still pursuing the Bennigan's dream, happened by and saw some serious renovations under way. As he reported:

It looked like a fairly serious change as the interior has been gutted and the exterior walls have come down. As I queried the construction worker regarding the future tenant he said, “evolution”.

“Wow, sounds great”, I replied……..thinking that the description sounded vaguely similar to the former ethos of the hallowed halls of E4volution/2X4/Ambiance…

And from the HG Photo Department: 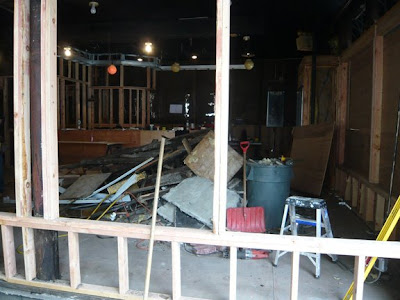 I said this in a comment over at HG: Seems the problem before was the concept, not the bar. So the owners decided to gut the bar and keep the concept?
Posted by Grieve at 8:31 AM

do the bartenders need to show their "personalities" with pieces of flair?

I, for one, certainly hope that pieces of flair will weigh heavily in the hiring of new staff during this renaissance of evolution.

Walked by yesterday and saw some guys inside juggling bowling pins. Audition?