A red-tailed hawk on Seventh Street

On Seventh Street yesterday afternoon...between First Avenue and Second Avenue... There were, oh, 15 to 20 people standing on the north side of the street, looking up toward the roof of the building at No. 80 across the street...As you can sort of see from these photos, a red-tailed hawk was on the top-floor fire escape... 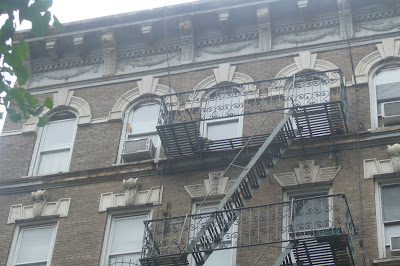 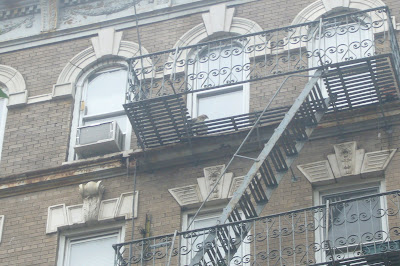 There was plenty of speculation about the hawk's presence, such as the baby pigeons who were nesting in the rain gutter. Efforts to reach the residents in the top-floor apartments were unsuccessful to this point. (And it wasn't made clear what the residents on the top floor were to do with this information.) 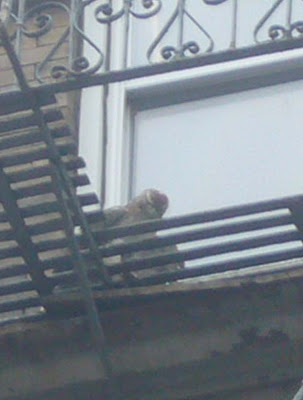 Unfortunately, we had to keep walking. We're not sure how this turned out...Before we left, someone joked that, perhaps, the cigar smoke from the ground floor would chase away the hawk...

For further reading on red-tailed hawks:
Today in Tompkins Square Park : Red Tail Drops Lunch in the Snow (Neither More Nor Less)
The Hawks of New York are dying... (Plain in the City)
Posted by Grieve at 8:43 AM

the red tail had breakfast this morning in washingtion square park.

We have seen hawks from our window and roof all the time, for years. (I say "we" because really it's my husband who sees them, and then shows them to me because what do I know about birds? Nothing.)

We have also had woodpeckers in our garden, and a few years back there was a makeshift hen house on the block, complete with roosters crowing at the crack of dawn.