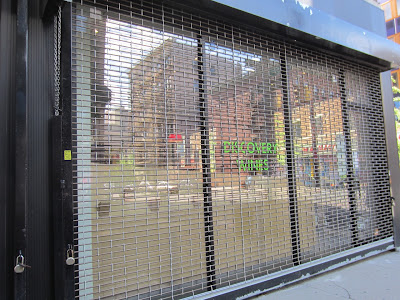 Back in the late spring, Discovery Wine moved away from its home on Avenue A ... one of the businesses displaced with the arrival of Union Market... Discovery didn't travel too far — just to the southwest corner of Avenue B and Second Street.

According to the Discovery Wines site, the store will open today. (Updated, per a Discovery tweet — they'll open at 5.)

And this closes the chapter on 16 Avenue B...Previously, two different restaurant-club hybrids had tried to open a club restaurant at 14-16 Avenue B since the corner deli closed a few years ago. (As you may recall, one venture called for a 3,000 square foot Italian restaurant, catering company and lounge "with an occasional D.J.")

The stores displaced by Union Market now have new homes ... in addition to Discovery Wines, the Houston Deli & Grocery is opening on Second and A ... and Joyful Nail on Avenue A...

More on Union Market here.
Posted by Grieve at 6:38 AM

Email ThisBlogThis!Share to TwitterShare to FacebookShare to Pinterest
Labels: 14-16 Avenue B, Discovery Wines

The is good. Residents fought for a long time to get it to this point. I think that the breaking up of these big spaces is good because it prevents another big lounge restaurant from opening. Great that some businesses have found new homes in the area. I'm also glad that the two deli's on 4th and B have remained deli's.

Discovery still not open, but they seem to be at the sweeping and box-tossing stage so soon, I fervently hope.