Back in March, the Post reported that "The Bowery is about to lose its last remaining atmospheric links to CBGB" — the Morrison Hotel at 313 Bowery. 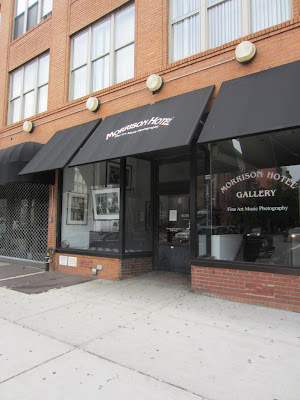 At the time, Steve Cuozzo noted that the Morrison was on a month-to-month lease... apparently the Morrison folks have decided to leave... as the sign on the door shows...the space was almost empty, save a few framed photos waiting to be boxed up... 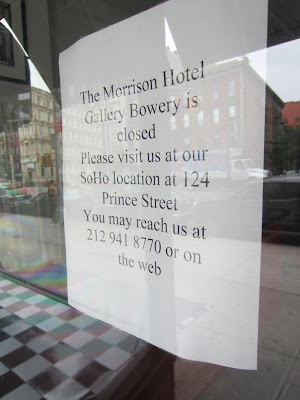 So what's next? Something fancy, for sure!

Per Cuozzo in March:

The 3300-square foot space at 313 Bowery now occupied by the Morrison Hotel music-photo gallery — named for the famous Doors album and a spiritual successor to the CBGB gallery that was adjacent to the club — has been put on the market by Elliott Azrak's The Max's Kansas City Co., which netleases the property's retail space from the Bowery Residence Committee.

"The netlease holders are looking for not just any tenant, but one who can leverage the history of the block and the unique Bowery demographic," one source said.

That could mean a restaurant/lounge — or another store similar to John Varvatos.

The secret club Extra Place by Max's Kansas City is also part of the deal. 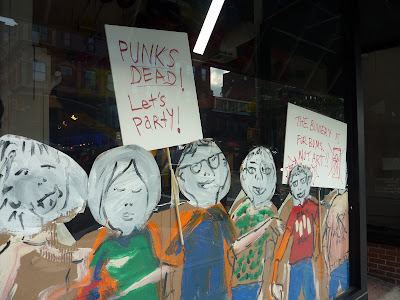 The Morrison Hotel SoHo NYC Gallery remains open on Prince Street. We reached out to the Morrison folks for comment/confirmation, and are awaiting word from them...
Posted by Grieve at 6:52 AM

Good riddance. I always felt that this boutique or gallery whatever the fuck it is was an insult to the memory of CBGB. I mean is there a more bald faced example of yuppies attempting to capitalize on a legacy that doesn't even belong to them?

^^agreed. i also think that varvatos should follow suit and move to soho where it belongs and just leave cbgb rest in peace.

BRC should do something responsible with the space!

Varvatos and Morrison Hotel cater to the rich. BRC should do something else with the space. I respect BRC's mission, but why are they siding with gentrification by renting to people like this.

They have an opportunity with this space to do something that will benefit the neighborhood in some way. We don't need anymore restaurants and lounges that cater to the exclusive elite. No high fashion.

I also think that Community Access should not rent to a huge place like Heartbreak. It started out with beer and wine and now wants a full liquor. No way.

The supportive housing and low income housing organizations should not rent to places that are destroying our neighborhood.

Actually, most of the supportive housing and low income housing that have commercial spaces will not rent to bars and restaurants or other businesses that are problematic.

I think it is time for BRC and Community Access to get with it.

This is a class war!