Lower East Side second in the city with 19 stalled developments; plus, Scott Stringer's plan for them 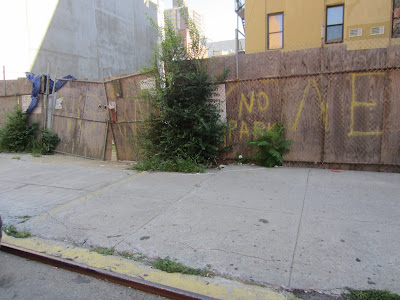 From the EV Grieve inbox ...

The Borough President’s surveyed all 129 stalled construction sites in Manhattan and found that 37% had problems with litter; 60% had fencing that was in disrepair or vandalized, and half of the sites had sidewalk obstructions. New York may be living with these eyesores for several years, the study found, because even if the economy turned around today there would be a considerable lag time before construction resumed and was finally completed on all 646 of these stalled sites citywide.

His report calls for the city to to pass legislation that permits property owners and government to create temporary public spaces on private property. "New York should also streamline the approval process for private uses — such as farmers markets, cafes, and performing arts spaces — and pass legislation guaranteeing that such temporary uses will not remove previous approvals for the site."

Interesting ... though could this open the door for more douchebaggery? Stringer cited the Timeshare Backyard on Ludlow Street as a good example of this temporary usage. We only ever heard complaints (noise ... water) about this place, where, among other things, you could pay to spray a woman wearing a white T-shirt with a hose for entertainment.

But. Given the right idea... How about putting up a screen (or paint a wall) and have a weekly movie night...? Nothing mainstream. Find someone to curate the series. Show some John Cassavetes or something. You get the idea.

In any event, according to the report, Community District 3 — which includes the Lower East Side, Chinatown and the East Village — had the second-most number of stalled sites in the city with 19. (District 1, which includes Tribeca and Lower Manhattan, had the most with 20.)

Several of the stalled projects in this neighborhood are being, uh, unstalled, such as 75 First Avenue and 427 E. 12th St.

It's a comprehensive report, which you can find here...

fuck this, no way...we don't need anymore pop-ups for tourists, temporary spaces to bring more morons into the neighborhood.

Wawawa-we don't wan't anything that could interest anybody from outside our neighborhood. We just want empty lots with more rats.
Do you have any idea how ridiculous, selfish and unrealistic that makes you sound?
Tourists aren't leaving the neighborhood. They've been coming here since before The Electric Circus they'll be coming after you've left the neighborhood.
Instead of whining about it, the smarter move would be to vet who and what is coming in at this point to see if it's in the spirit and best interest of the neighborhood.
If we just complain about it without addressing it, those decisions will be made without us.

Also, consider that many of our community gardens were once empty lots that had fallen into disrepair. If the communities then had this same philosophy of not allowing anything new that might attract people to the neighborhood then we wouldn't have the beautiful gardens that help define our neighborhood.

yeah, but this supports property owners while making money for the city and further gentrification corporatization and destruction of the neighborhood. a neighborhood that built itself and created its own identity only to be ravished by developers, Bloomberg and douchebags from all around the world.

The people of this town built this town, and douchebags like yourselves take from what others have created and then laugh in their faces.

How can we protest this legislation. If this goes through it will destroy the neighborhood like
overnight.

This will just be like the BMW/ Guggenhiem Lab, festival of ideas, artisinal ice cream, cupcakes, meatballs, fun and games, and oh of course, all kinds of douchebags.

Does anyone know how we can oppose this kind of legislation being passed?

Count me in: Awful idea.

whatever is built should be to benefit the community, not the never-ending stream of "visitors" that are DESTROYING our community. we have an enormous existing problem with WAY too many disrespectful, morally inferior people coming here to drink, p*ss, sh*t, and vomit all over everything sacred to the east village. to attepmt to attract more of this filth would be simply insane. the bloomberg administration is entirely aimed at selling out and capitalizing on any actual NYC resident who isn't filthy, stinking rich and in agreement with his (horrifying) vision of NYC. for them to claim otherwise is the biggest insult of all. look what they have done to cut ALL social programs, and look what they have spent to attract more tourism. it's criminal. enough said.

It would be really nice to have some artist studio/work space. Maybe what gets created in a particular space could then be shown and sold in some way to help the community.

Rocky smells a rat in this legislation for sure, and any development of these vacant lots for temporary uses can only mean one thing, artisinal food, followed by artisinal rats.
How about legislation that would take these stalled construction sites away from private lux developers after a certain period of time and turn them over to developers of affordable housing.
Rocky means real affordable housing for people who work for a living, not like this 80/20 nonsense. Or artists housing? Bloomie and his lackies have used eminent domain to seize land all over this town, to build stadiums, allow for the expansion of Columbia etc, so how about using it to give working-class people a place to live for a change.
One other thing - Did anyone ever consider that perhaps the rat problem in the EV is because we have nothing but restaurants, ice cream parlors, cookie shops, icy shops, etc., when we used to shoe stores, bookstores, furniture stores and hardware stores.

While both sides to this debate seem to have merits, it's a moot point, isn't it?

Anything requiring city legislation will have to go through Speaker Quinn, Stringer's rival for mayor. I don't see it becoming one of her legislative priorities.

Putting that aside, whether this works would come down to how much input is given to the community. Community gardens, farmers markets and art spaces are definitely positive examples of how this could work.

Sadly, most of this Bloomblight will remain with us for many years to come.