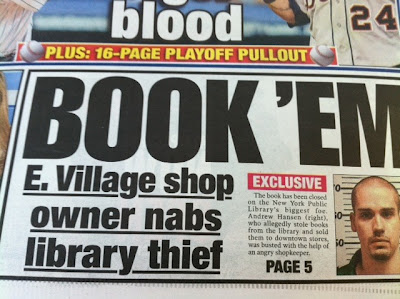 So the Post has a piece (an exclusive! FRONT-PAGE story) about this guy, described as a "serial thief who reportedly stole books from the New York Public Library." So the guy would rip out the official-looking library pages and sell the books around town.

Donald Davis, owner of East Village Books on St. Mark's Place, had been fooled by the guy before. So they set a trap for him the next time he walked in.

Anyway, long story, the guy returns... and, after a confrontation, a tussle ensues, the Post reports. But! Davis was a wrestler in high school. He pinned him until the cops arrived.

“There’s no other situation where I would do this. I was so angry that he was stealing from the library,” Davis said. “The library is just a very important piece of our community.”
Posted by Grieve at 6:41 AM

What a jerk this guy is. I mean, first of all, if you steal books to sell, you know a thing or two about books, and if you know something about books you should respect the public library. A drug problem is no excuse, Mr. Hansen! Everyone in publishing has/has had one of those! We still don't steal from libraries!

Second, if you must make money this way, just get a job at or freelance for one of the many publishers in town, and pilfer from their free-book carts. Again, a drug problem should not hinder your participation in the industry. Warning: This method will probably yield chump change/beer money unless you work for a publisher of art books.

Anyway, good on Donald Davis ... EVB is my favorite bookstore and I found the part about Davis wrestling the thief to the ground very exciting!

Awesome! This explains why some of the rare art books in the NYPL holdings that I requested always suddenly disappear from their system. That shit is out of print, man! Good call going after this jerk. I love the bookstores in the EV! Yeah! Now go buy more books, people.