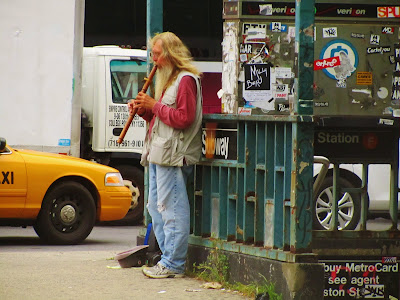 Steve Albini on NYC: "New York has a couple of characteristics that are undeniable and one of those is that it’s a magnet for assholes who couldn’t get any attention at home and decided that the problem wasn’t that they weren’t interesting but that there were all these squares around them in Dubuque or whatever and they need to go to some big cosmopolitan city like New York where people will appreciate them." (Gothamist)
Posted by Grieve at 12:27 PM

nice shot of the flute guy - in the mornings he can be found at 1st & Houston, on the other end of the subway station. we've heard the story of the chillmaster, how about this dude?

Yeah, what's the deal with Flute Guy? He's been standing at the F train station, endlessly noodling on the flute, for as long as I can remember - many years. He has no change cup, so he's not busking. I have always thought of him as The Last Hippie in the EV. Was he in a rock band 50 years ago? Burnt out Wall Streeter? Joan Collin's Ex-Husband? The possibilites are endless.

Flute guy is the best! He does have a change cup, which I contribute to when I can. He's also selling his CD for five bucks now.

We'll arrange for Marty Wombacher to go out with him!

I can't tell you how interested I am in this guy. He's a staple! Let's get the scoop!

@EV Grieve: Hot damn, another assignment! I'll get on it soon, is he around anywhere at night?

Anonymous 1:50 again... glad to hear other people are interested in the Flute Guy. we ought to go down to Zuccotti Park and protest the fact that he hasn't gotten his own "road trip" to Coney Island, or any all-nighter parties at the Mars Bar. a great social injustice if there ever was one

i guess the lafayette and broadway station was too damn hot for him all those years and he moved to second avenue.

I actually randomly saw flute guy on one of the local tv channels, whatever the local pbs sorta channel is. Someone put together a show documenting all the street/subway musicians. I forget the whole background, but his story was pretty sad. Something about his wife dying of cancer, and not having any insurance. I'll try to dig up the name of the show. It was on at least a year ago.

I usually only see flute guy around 9AM on the 1st ave. & Houston corner. I rarely see him in the evenings. Am pleased that Marty is working on unravelling the Mystery of the Flute Guy.