Meanwhile in Italy: [TO]Bike of Turin 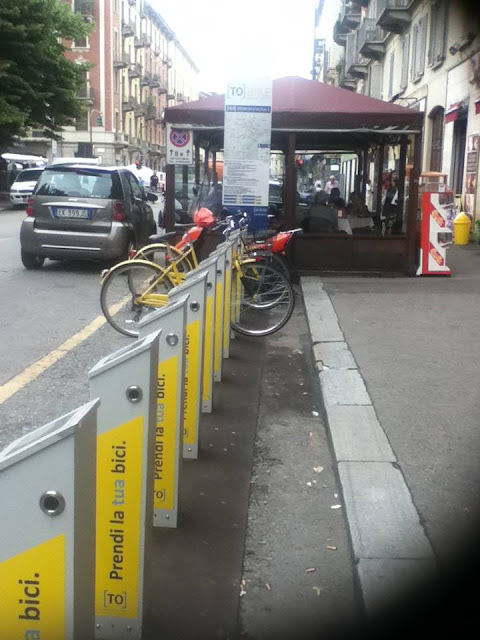 Given some ongoing interest about Citi Bikes... we've had readers share photos of the bike-share programs in London ... and Paris... Now, EVG reader Jennifer Kellow checks in with photos from a recent trip to Turin (Torino), Italy... [TO]Bike of Turin launched in June 2010... at its debut, the 1,200-bicycle and 116 station service was Italy's second-largest bike share behind Milan... 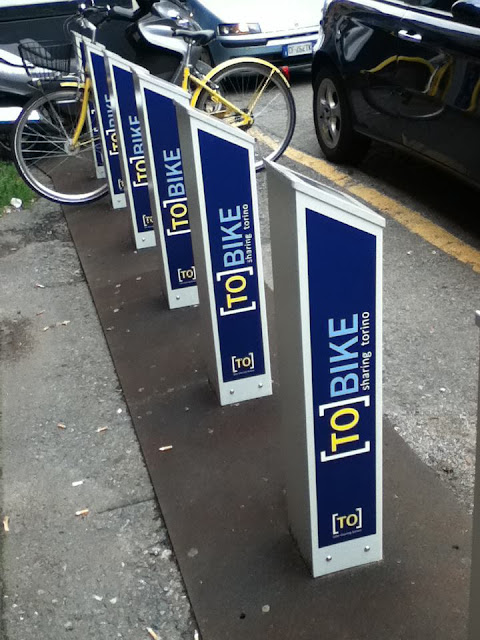 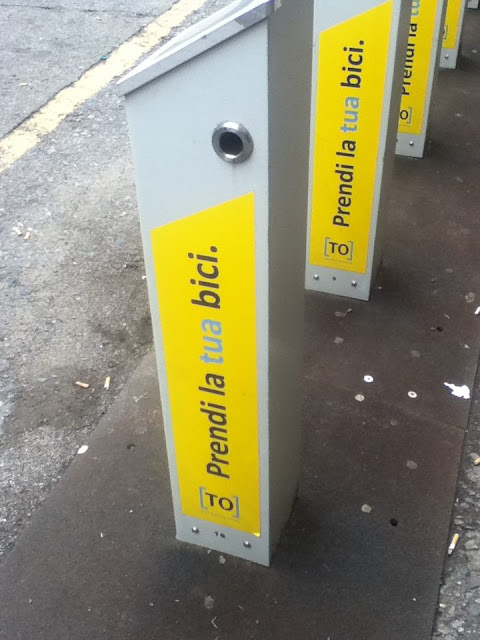 [TO]Bike is part of the Bicincittà, which has bike-sharing programs throughout Italy and Switzerland.

Jennifer notes that "it does look like a nice normal bike share" ... and without any noticeable corporate sponsors.
Posted by Grieve at 5:20 AM

Many CitiBike users credit card info was exposed to any hacker who wanted it on the CitiBike website 3 months ago, yet only now are they alerting their customers of the problem. What is the point of having a big bank sponsoring the program if they are exposing credit card numbers, expiration dates etc and not informing people for months? The program might as well be sponsored by a group of hackers. Call it "AnonyBikes, Give us your credit card. We"ll take you for a ride."

This delay in informing the public about the security breach is an obvious coverup to deflect from all the bad PR they had during the launch of the program, which continues to have many technical problems. Many frustrated users are still unable either to rent or return bikes due to broken kiosks. They promised a fix but instead there are broken, empty or full kiosks everywhere with no sign of the rebalancing program they originally promised.

Thanks fpr the post, Grieve. Every bike sharing program in Europe looks much, much less expensive and more attractive than ours, without the garish corporate advertising, plus they even rent normal looking bikes, not these 2 wheeled blue SUVs. Any cyclist knows the difference between a decent bike and a clunker, and these clunkers only discourage more experienced cyclists from participating. I just hope our future Mayor , whether Carlos Danger or Mini-Me Christine Quinn, will fix the problems and not pretend they aren't real.

Our gauche, gaudy bikes in comparison to these sadly show where Citi's corporate heads are at. And they paid handsomely for designers too I bet!

The bikes in Turin are an exception to the standard use of stronger, more solidly built bikes used in other bike share programs. The lack of corporate sponsorship is also an exception.

As much as some make out the program to be a total failure the very large numbers of riders refute that. The fact that some stations are empty and others are full is representative of a successful program that has attracted New York residents who are using the bikes for commuting.

Regarding the possible exposure of credit information - it happens to all sorts of businesses including banks. I have been informed by letter three times in recent years about such problems. And it has always been well after the actual incident. Although this lapse in security is of concern it's those businesses that miss detecting security breaches that you should be more worried about.

notice how the bikes don't ursurp parking over there.

Now Torinos can take bike rides for daily pilgrimages to the statue of Lucifer and the gates of Hell!

No corporate sponsor because tax dollars pay for the program. You cant have it both ways.

@ Anonymous 11:44 and we would know that...how? maybe these stations also displaced parking spots (as if that is some kind of actual tragedy).

They look a lot swifter than our heavy duty clunkers...

how do we know these didn;t usurp parking spaces over there? Ummmm, from the pictures?

No, just a person with an opinion that is apparently different than yours.

Somewhere I have photos of the bike shares in Boulder and Barcelona, if I can't remember to find them, just trust me, they look the same.

I sent the photos of the bike share in Torino Italy to EV Grieve. I can tell you that it seems that the bike share is aimed a little more at locals than only making money off tourists.Here is their website translated. http://translate.google.com/translate?hl=en&sl=it&u=http://www.tobike.it/&prev=/search%3Fq%3Dbike%2Bsharing%2Btorino%26safe%3Doff%26client%3Dfirefox-a%26hs%3Doby%26rls%3Dorg.mozilla:en-US:official

I also found this excerpt particularly interesting. "The line [TO] BIKE, characterized by objects produced in a limited edition, was carried out with a view to raising awareness of sustainable behavior and to promote the area. Part of the materials used for the creation of the items were in fact recovered from PVC banners, seat belts, waste of skin and air chambers and processing laboratories built by local craftsmen." This does appear to be a bike share free from corporate sponsorship.. so why can't we have something like this in NYC? This is a bike share program I could get behind! Also, a big thanks to EV Grieve for doing a story on this. I do hope that a story like this helps people to think about our bike share program and know that you can do it without big business sponsors!

Come on people, we can do it! All we need is "PVC banners, seat belts, waste of skin and air chambers and processing laboratories" and the hot air generated by this great debate.

I have used Bike Share programs in Mexico City, Denver, and Milan. I just returned yesterday from Torino where I used their ToBike.

The bikes are solid and sturdy. However, the system seems poorly maintained. During my two days of use I encountered: a missing left pedal, a bike with no chain, several stations with no bikes, difficulty locating a station to drop my bike, flat tires, and a "reclining" seat.

I loved Torino and would love to see the program receive more support.