At Pogopalooza 10 in Tompkins Square Park 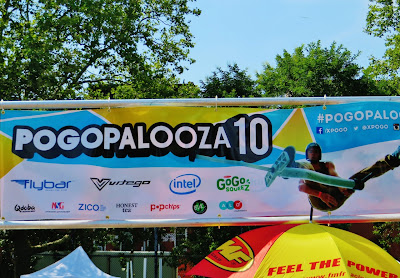 Pogopalooza 10, the annual world championship of the sport of extreme pogo, took place this afternoon in Tompkins Square Park.

Xpogo athletes from across the world attempt to qualify for spots in the next-day’s finals in three disciplines: Big Air, Best Trick, and High Jump. The qualifiers are open, so on-site sign-ups are permitted. Throughout the day, athletes will be attempting to break all of the 13 recognized Xpogo World Records, in association with Guinness World Records. 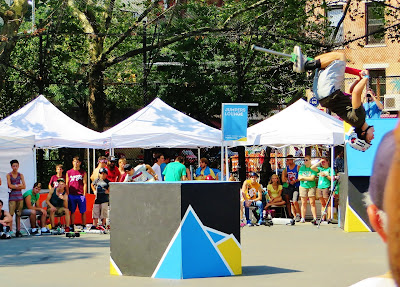 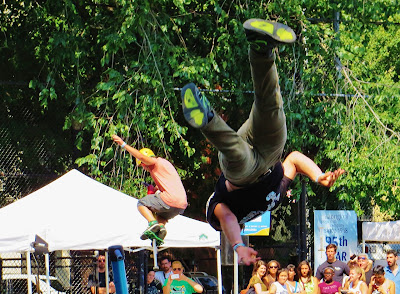 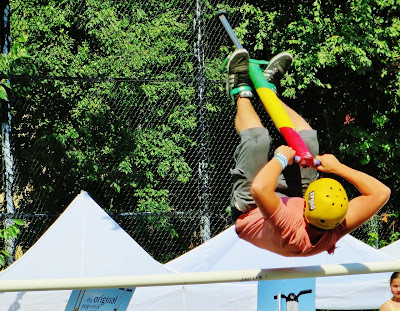 And word was that Biff Hutchinson broke his own record for Highest Frontflip at 8'2" .... 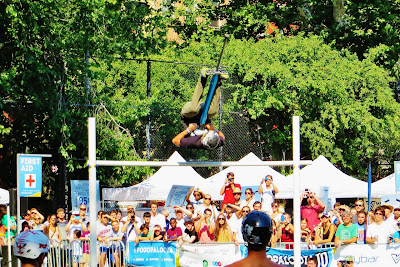 The finals are tomorrow afternoon in Union Square. Any Pogopalooza reaction from those who were in the Park today? Someone described it as a "shitshow" — but not in a good way.

Photos by Bobby Williams.
Posted by Grieve at 8:17 PM

All I witnessed was the aftermath; trash strewn everywhere.

I was there early and couldn't stay, but the preliminary show was good. It's a different crowd than skateboarding. Much whiter.

it was a shit show and here's what we sent to them by email today: "Greetings and welcome to our neighborhood. Your event today while certainly a huge success from your perspective was entirely too loud and disturbed the people who call this neighborhood home. Many people are upset and will bring this to the attention of CB3, the parks department and the 9th precinct community affairs officer. Please undertake to be less loud and therefore more respectful of local residents should you undertake to repeat this again. Also you might not be aware but a dead body was discovered in the park early this morning and had scarcely been removed before you started blasting your amplified noise. Very poor taste indeed. Best regards,"

Can't understand why so many haters on this blog. I've been living in the East Village since the 80s and I went to Pogopalooza and thought it was a really cool vibe and had lots of old school people in attendance. The tricks the guys did like back flips were amazing. Even better was the free pogo stick free rental place with all the kids and parents trying to learn how to pogo. Never seen so many smiling faces. I gave it a go but pogoing is harder than it looks.

Anonymous 1:40am,
1:40am? Were you drunk when you wrote this? I'm sure they'll have a good laugh reading it.

Anon 1:40: You had me up until that "dead body" part. The body was not found in the park near where this expo was taking place, and if every event were going to be cancelled or altered in the park every time someone overdosed in the park we'd never have anything at all. What would you have us do - sit "shiva" for the guy who OD'ed? Also, how were the organizers to know that someone died there earlier that morning? Did you go around telling everyone? Did you put up signs? If I hadn't read this blog, I wouldn't have known, and I don't think I knew until after this had been setup. Your logic on this matter smacks of selective-outrage in the face of nimbyism.

Kinda loud, but fun to watch. The featured pogoistas all seemed to hail from the midwest, giving an amusing image of mid-America.

Not at all. I wrote it much earlier. Couldn't sleep so did what I always do and checked out evgrieve and copy and pasted Ok the dead guy part probably over the top but the noise leval was way beyond the pale and those of us who live on the block suffer greatly. It's one thing when there are concerts and events that have some sort of tie to the neighborhood, howl as an example. Even wigstock back in the day. But a corporate giant event with illegal noise decibles and no ties to the communtiy is a bad neighbor. Enjoy Sunday everyone! Xo

I'm with you 1:40/11:30. It was annoying as shit (the loudness that is). I left the park a few minutes after it started since there was no way in hell I'd have a peaceful (relatively) sit on a bench at the opposite side of the park.

It was a fun event but they really should have turned the volume down about 30% or so, everyone would have still heard plenty everything plenty well and they would not have made themselves unnecessarily into a nuisance .

It was a good event but way too loud, they had 2 emcees who shouted at the crowd to get them excited and to go buy a pogostick, which no one seemed interested in doing. The good news is they will soon be rolling out a new mass transit program called CitiPogo. Now you can rent a pogostick by the hour and hop around the city instead of using outdated forms of transportation like subways, buses and bikes. The bad news is they will need to remove all remaining parking spaces in Manhattan to make room for the CitiPogo docking stations. Due to the fact that almost everyone from the Midwest already appears to be a pogo stick expert, we can expect rapid adoption of the program to replace most other forms of transportation. Drivers will need to park their cars in the outer boroughs, and then use a pogo stick to get to their final destinations. Since there are almost no parking spaces left in Manhattan anyway, city planners do not believe this will be any inconvenience. Finally, in order to accomodate all the new pogo-sticking commuters, special blue pogo lanes will be added between the bike lanes and car lanes on all major avenues.

The city has already been quietly putting in PogoLanes on the Avenues... However, they never took into account the manhole covers...

I wasn't there but it seems..well....DORKY

giovanni, that was hysterical

Wow! And I thought New Yorkers were supposed to be open-minded! The people in the crowd were smiling, taking pictures, dancing, cheering on the athletes, and enjoying the free pogo area and the free drinks and snacks. These guys represent many states from the U.S., including New York! Russia, Nova Scotia, and England were also represented. So please look at it as these athletes bringing what they love to share it in a place you love. I do agree with the Pogo lanes idea...people might actually smile at each other rather than pushing and shoving their way on to your public transportation-which leaves allot to be desired.

Quiet, family & pet friendly neighborhoods available in Connecticut, NJ, and upstate NY... If you don't like the noise and crowd, why do you live in the heart of one the busiest cities in the world? It was not even early or late in the day...

Just wondering: the email you sent to "them" to complain - did you sign it "Anonymous"?

The show was great, many thanks to the midwest guys and their visiting friends!

I've been here since 1985 and was already big then, and an friend to squatters and Anarchists and Ray's and Tribes and No Rio, and I loved Pogopalooza. It was a gorgeous day and mostly everyone was happy and smiling at the extraordinary stunts and positive energy of the players. We saw one person do fourteen back flips in a row. I didn't think about how the megaphone might be too loud but maybe if people had told them they would have lowered it a little. There were lots of old style neighborhood people there, including elder, low income, non-white, disabled...you have to admire these kids for doing what they do. And they came as far as Russia to do it. Negativity will ruin your life. The TS riots were 25 years ago. You have to open yourself up to what is now. It is a basic instinct of youth to want to challenge gravity. Good for them.

Robin...thank you for sharing a positive response to this event. My son is has been in this sport for three years. This is a group of athletes trying to grow the sport of Xtreme Pogo. You can't understand it until you witness it. This is a great group of young men that accept each other, regardless of where they have come from. They treat each other with respect. They cheer for each other in their accomplishments and support each other in down times. They are living life to the fullest without regret. We should all be so lucky!
Tennessee Mom!