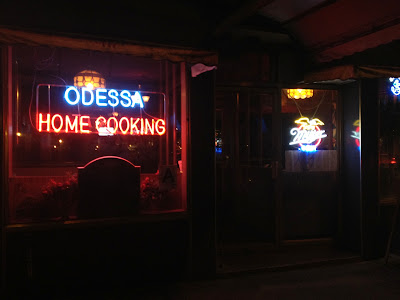 Word is spreading among Odessa Cafe and Bar regulars that the space on Avenue A will close for good after Aug. 15.

The closure rumors started last summer after the building at No. 117 was sold to 9300 Realty (owned by Croman Realty).

Paperwork filed ahead of this month's CB3/SLA committee meeting showed that six principals are part of a team who is buying the business ... at least one of which is a "former owner and general manager" of Tribeca's Tiny's & the Bar Upstairs, according to public documents posted on the CB3 website.

And CB3 OK'd the applicant's license, with the stipulations:

• it will operate as a full-service American brasserie restaurant, with a kitchen open and serving
food during all hours of operation,
• its hours of operation will be 11:00 A.M. to 4:00 A.M. all days,
• it will play recorded music at less than entertainment level, and not have live music, DJs,
promoted events, scheduled performances or any event at which a cover fee will be charged,
• it will close any façade doors and windows at 10:00 P.M. every night,
• it will not commercially use any outdoor areas,
• it may have "happy hours" from 5:00 P.M. to 8:00 P.M.,
• it will not host pub crawls or party buses

The closure of Odessa Cafe and Bar does not impact the newer Odessa next door at 119 Avenue A... though we hear this Odessa will have more of a bar environment now later in the evening hours.

Former GM from Tribeca's Tiny's & the Bar Upstairs part of team to buy the Odessa Cafe
Posted by Grieve at 5:59 AM

The wrong Odessa is closing. Damn it.

that's funny. the wrong odessa is closing. so true actually!

I had the best Valentines Day last year in that back booth. Do you remember? We brought candles. On the busiest night of the year, my date and I were the only two people who came to visit you, and you took such good care of us. I'll never forget that for the rest of my life.

Every Wednesday I came in and you played me awesome underground music on your iPod. Stuff I'd never heard. Discovered many new bands. And two beers for $5. You're always so generous.

On Saturday mornings while there were hour long lines at other breakfast/brunch places, you were almost always empty and served my breakfast to me in under 10 minutes. And it was always delicious.

On lonely Sunday nights I would sit up in your booth, basked in your blue/red neon glow and watch the people hurriedly go by, wondering why no one liked you anymore. How could anyone not like you? I love you so much!

And now, you are dying. I hope you are comfortable. Death is not something that I deal with well - I'm actually choking up right now - but I hope you know you that in your short life, you made hundreds of thousands of New Yorkers - especially me - so very happy.

Your neighbor and friend,
Shawn G. Chittle
Avenue A

I have such lovely memories of coming here as a 19 year old kid for their cheap dinner combo specials. First place I ever tried stuffed cabbage and the only place I ever had stuffed breast of veal. This Odessa and the old Kiev were my introduction to blintzes, potato pancakes, pierogies, and kasha. I think it was like $2.99 in 1981 for their dinner combo. I don'r even think I knew the Ukraine even existed before I came here..... I haven't been back in years, but will make a point to go as often as possible before it closes... Do we really need another trendy bistro with the same menu as the 25 others we are drowning in?

very sad. I remember lots of late-night breakfasts with pals after long days and nights working load-in and tech calls in the downtown theater scene. (remember that?)

Yes yes I had a million great meals at Odessa over the last 25 years. That being said, not one of those was in the last 7 years or so, the food lately sucked. My memories and hopefulness led me to still show up every couple months and try again, but NOPE kept getting worse. Not sure what happened but the food has been awful for a long time now good riddance.

Pork chops mash patatoes fried unions split with a friend and sit and eat and be left alone to talk. such a spacious casual modest way with letting you alone in that place

@Shawn Chittle, what an amazing tribute to a small, quiet, dark jewel, so sadly overlooked by the self-absorbed texting minions clogging the street in front of it. You literally brought tears to my eyes, and now I will miss it even more.

Oh, this sucks. Odessa was the first place I had breakfast with my first live-in boyfriend, back in 1968. We went there every Sunday morning, and after we broke up and I moved out and my new boyfriend later husband was in town I took him there for breakfast too when I didn't feel like cooking. (Also Veselka, which I really hope isn't going anywhere)

it was the perfect dive. they had excellent gravy fries. the booths in the front were perfect for holding court for hours. it was relentlessly cheap, and homey, and could support a dance party every now and then. and there were great bartenders. one in particular, I'm thinking of.. and now it really is their last day. goodbye Odessa Dark. I'll have a high life & jameson in your honor.

Anyone else remember the grim warning that was on a sign in the bathroom?(Complete with photo, too!) Much read, and much ignored, I think.

Shawn's post made me tear up. And to be honest it made me feel guilty about the times where I neglected old haunts that showed me nothing but love.

Living in a town that is a perpetual 24/7 Sex and The City film set is soul destroying and demoralizing.

My dad was born in an apartment on E. 2nd between A and B, graduated from Seward Park High, became a NYC fireman and eventually moved to 'the country' (Brooklyn) . But even after moving deeper into the burbs with his family, he never lost his love for his old neighborhood (which I returned to as soon as I flipped my tassel). He and my mom would come visit every week, and after she died, Odessa became my dad and my special Sunday place. He's gone now too. I would give anything for one more plate of potato pancakes with him.