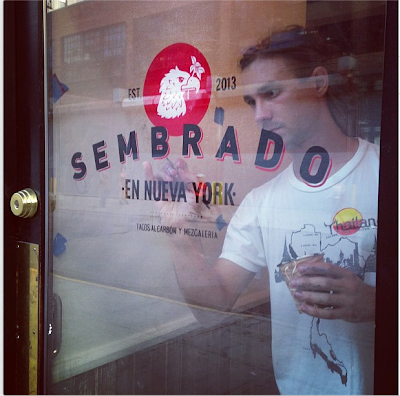 Sembrado’s Tacos al Pastor, the new Mexican restaurant from Danny Mena, the chef and co-founder of Hecho en Dumbo, is apparently opening on Thursday. (This info comes via a news release published in The Epoch Times.)

Sembrado’s, opening July 25, will be one of the first in New York to use the classical Mexican technique of slowly cooking marinated pork on a vertical rotisserie — called the trompo.

Grilled meat tacos, made with hand pressed corn tortillas, will be a staple on the menu.

The pastry chef is Fany Gerson, who used to work for Eleven Madison and Rosa Mexicano.

Sundae options will include rotating ice cream flavors such as Mexican Vanilla, Strawberries and Sour Cream, and Horchata.

Each is coated with a choice of sweet tomatillo sauce, Mexican hot fudge, and goat’s milk caramel.

The Sembrado website is live... and includes the menus... 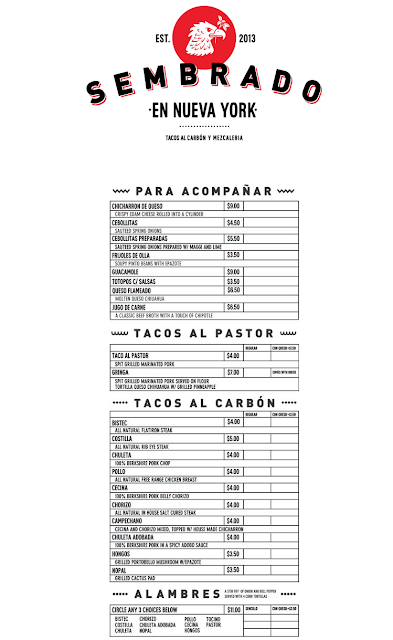 The space at 432 E. 13th St. between Avenue A and First Avenue was previously home to Masak.
Posted by Grieve at 5:33 AM

Yeah, great menu. Tell me more about the hot painter.

Was way more excited about this until I learned that Danny Mena was born and raised in Mexico City. I prefer $10 artisanal fish tacos crafted and curated by skinny jeans wearing fund babies out of a low carbon footprint taco truck; sure they're a bit more exensive, but that taste of authentrification is difficult to emulate.

JAZ, your irony is so old and stale, it lives in its own Upper East Side townhouse.

@JAZ
Why? Did you think Mexico City doesn't have any $10 artisanal fish tacos crafted and curated by skinny jeans wearing fund babies out of a low carbon footprint taco trucks?
Either you don't know much about Mexico City or your just a typical racist.

Hell yeah, could be just the thing for me. It's nearby, I love tacos al carbon, and al pastor. When I first moved here it was a wasteland. Now, we are silly with taco joints, new ones opening all the time. One can barely even keep pace.

Froyo in a hoof bad.

Im psyched for this, Hecho is great.

@ Anon 12pm - we get it; you have the Travel Channel in your dorm room.

But will the ice cream with goat milk caramel be served in a hoof?
Viva Mexico

Walked by yesterday and it looked more like a bar than a taco place. Whether or not he's a fund baby, referring to the trompo as a "classical Mexican technique" seems incorrect since the technique was introduced to Mexico by the Lebanese. I point this out because a mistake like this casts doubt on the place's claim of authenticity. $4 is steep but on some days it's probably worth it in order to save the trip to Harlem, where there are a few places making al pastor on trompos.