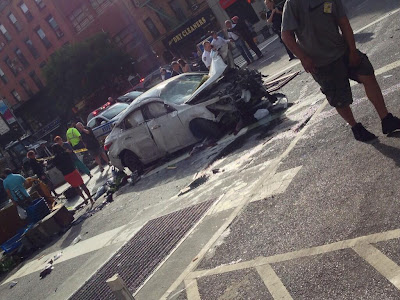 As previously reported, the NYPD charged Shaun Martin, 32, of Bayside, Queens, with DWI.

He was also charged with possession of PCP, according to online court records.

Possible sentences reportedly range from probation to 15 years in prison.

Just before 7 a.m. on June 19, Martin and a female passenger were reportedly speeding down Second Avenue when he lost control of his Nissan Altima ... jumping the curb around East Fourth Street and injuring four people, most critically 62-year-old Akkas Ali. He reportedly emerged from a coma 11 days after the crash.

Any word on whether the "female passenger" was charged with anything? Anyone who allows such a crime to take place from just one seat over should be charged with something. Accessory to...

Probation would be outrageous. At minimum the driver should be banned from driving for life. At minimum.

Weren't there "reports" early on that there was a second car involved? Some sort of impromptu drag racing or other vehicular pissing contest?

The defendant will likely point the finger at this other party, and one might wonder, even, if a clever jailhouse lawyer might have gotten down to work veeeeery early that morning?

After speaking with the owners of EVF&G, Akkas Ali (who worked as their florist) is still in a coma