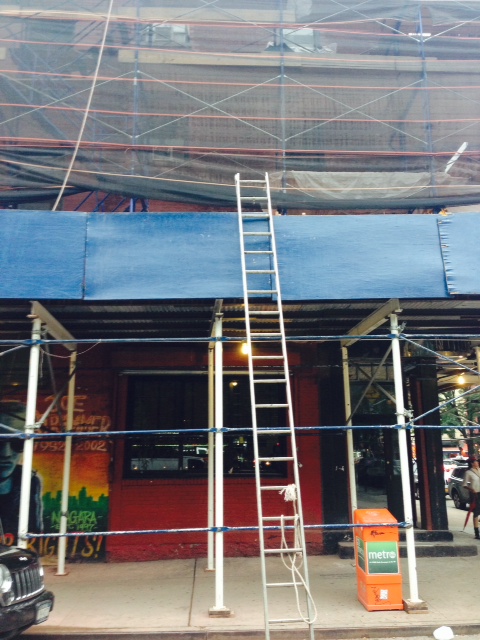 Construction continues at 132 E. Seventh St. at Avenue A... at the residential portion above Niagara... (work started back in April) ... DOB permits point to "facade repair" on the building.

A resident here shares a little about the ongoing construction this summer...

I got home from work [the other night] to find that the construction crew (who themselves have been notably professional and diligent) had left their ladder set up. Since the scaffolding went up, we have had two incidents of strangers scrambling their way up and wandering around on the scaffolding after dark and that was without a handy ladder.

And how have the renovations been going?

When they started construction, they (again with no warning) entered all of our apartments and started to cut holes in our ceiling. After we stacked and moved all of our belongings and furniture, they continued by putting anchor bolts and plates through our walls. Ostensibly this was to reinforce the existing structure; however, in conjunction with the "roof patio" they have built and the in-wall a/c units they are insisting on installing, it's our (the tenants) guess that they are looking to either flip these into more "luxury units" or more aggressively, try to add another floor on top.

Also, we got bedbugs after they cut the holes in the ceiling.

Previously on EV Grieve:
Straight to hell: Keeping a watchful eye on the Joe Strummer mural
Posted by Grieve at 5:49 AM

The tenants ought to contact the DOB and management about all this.

The ladder is creating what's called an "attractive nuisance" (tempting any ne'er do well to go up to the scaffolding) at the very least or is putting everyone in danger.

Unannounced holes in their ceilings? WTF?

The landlord is responsible for bedbug abatement. The sooner you move on that the better. Once they start reproducing you've got an infestation in your apt.

It could be coincidence. You may have inadvertently brought them in yourself. Or they may have travelled from a neighbor's apt. Your landlord should do an inspection of all apts adjacent to yours to make that determination.

We went thru this last summer in our building. It was a pain and we had to organize to get the issue finally resolved completely.

Sorry to tell you this, but even in ideal circumstances, bedbug abatement is a major pain. You're gonna have to do a lot of work to properly prep for abatement.

Ladders huh? I thought that meant they were fixing toilets...