At the Village East Cinema 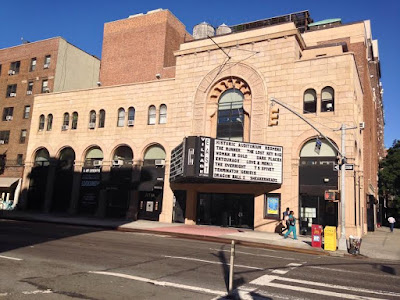 I've been meaning to write something about the historic theater — my favorite in the neighborhood — on Second Avenue at East 12th Street.

Oh, for starters, something that I was unaware of: Screenings before noon every day are $8, $6 off the usual price. (They also have $1 films for kids and parents in the mornings. "The Wizard of Oz" was playing this week.)

Anyway, that great analog marquee has been carrying the "historic auditorium reopens" message for weeks now. But most of the movies I see here, though, tend to be in the small theaters on the lower level.

I finally sucked it up to see whatever might be playing in the big room upstairs. So, the other morning, I was one of the four people who paid his or her $8 to see — eep! — "Terminator: Genysis" in the historic auditorium… 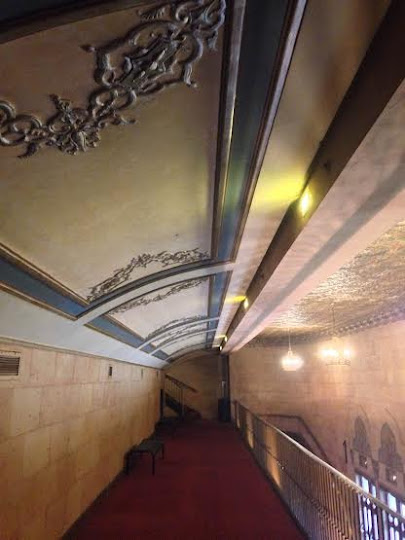 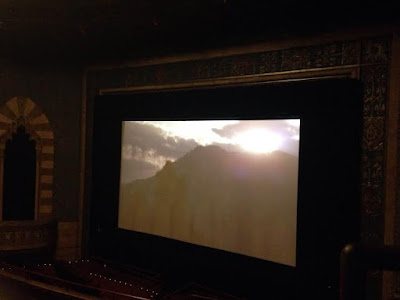 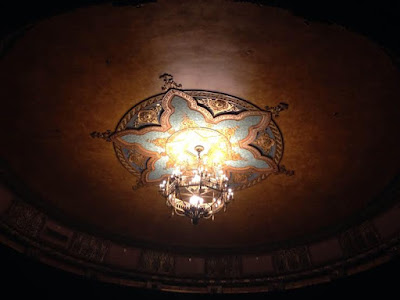 The renovated auditorium reopened on May 22. Here's more about the refurbishment via the Evergreene Architectural Arts website:

Built in 1925 as the Yiddish Art Theatre, the City Cinema Village East is one of a handful of Moorish Revival-style buildings in New York City. Intended to house Maurice Schwartz’s Theatre Company, the property ultimately becoming a multiplex in 1992.

In early 2015, EverGreene conservators conducted a historic finishes investigation, analyzing and documenting the condition of the ornamental plaster ceiling. Craftsmen removed 75 large plaster elements from the ceiling from which they cast new ornament in our New York City studio. The design decision was made to stabilize the extant ornament and craft and decoratively finish new ornament to be compatible not to restore the ceiling. This lends a “conservation” aesthetic to the Village East Cinema.

Using both traditional and mechanical methods, craftsmen installed new plaster elements into the ceiling and consolidated extant ornament to reinforce the support structure. Decorative artists removed and cleaned flaking paint from the ceiling and inpainted the newly-installed ornament to match the existing palette, seamlessly integrating new with old.

Here's a shot of the restored ceiling via the Evergreene website (they have more photos here). 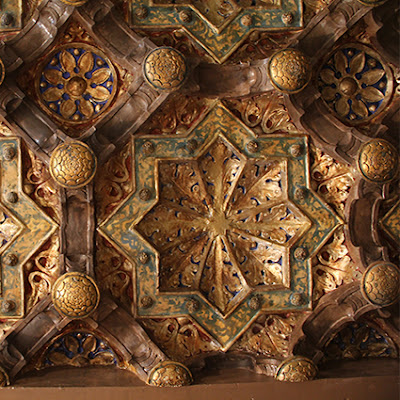 You can read more about the theater's history at Vanishing New York.

And now you do you want to discuss "Terminator: Genysis"?
Posted by Grieve at 4:30 AM

Terminator?! Is no sacrifice too great for a Grieve post? I love the big room there and (I've said it before) they have the best popcorn around. It's great to hear about the renovation effort.

Great! Now I have to watch Terminator: Genesis P-Orridge too and check out that amazing theatre.

In the 70's it was called the Entermedia Theater. I saw the Talking Heads there and a show called the Best Little Whorehouse in Texas before it went to Broadway.

Thanks, Grieve, for sucking it up and taking a bullet for the rest of us to bring us those photos. How I wish that lovely theater got a better class of movies than the ones that are all-too-often dumped into it, half the time it's stuff I've never even heard of. But now that I know I can go for cheap before noon, maybe I'll check some of 'em out. Wasting 8 bucks is better than 14, and you're right about the popcorn. (So, how was Terminator? As bad as majority opinion made it out to be?)

before it became a theater it featured in that wonderful large theater.
carol burnette was in once upon a mattress.
this is burlesque played there, along with plays that i no longer remember the name of, most of them pretty good.
the building is still beautiful and i hope remains with no further "upgrades"

I saw Ratatouille in the nice theater. #NotAllMainstreamFilms

After four movies, a TV series and a pinball machine, the Terminator story feels really tired now... the non-Arnold leads were pretty dull too. But I enjoyed the experience... being 1 of 4 people in the huge auditorium on some random weekday morning.

Last night was it for "Genysis." I believe Hitman: Agent 47" will be in the big auditorium starting today. I've seen some good movies there in the past few months... ("Animals" comes to mind ... and I admit to liking "It Follows.") They also get the films after they've played a few weeks at the Angelika ...

Hey, I enjoyed "It Follows" myself,and "Hitman: Agent 47" is right up my alley, so I guess I'll be going to the movies soon. Thanks for the re-hash of the Terminator franchise!

EV- good call. They're very eclectic in the movies they show. Very indie to very Hollywood. Went to a 4:50 show of Ten Thousand Saints yesterday- me and one other guy in the theater. Movie wasn't really much about East Village and not a great movie, but it was great that they chose to show it. Haven't been to a movie in the renovated big theater yet, but looking forward to it.

Gojira- the movie was dull and boring except for Arnold. He should do more movies like 'Maggie' . This franchise has been done for years.

With the coming closure of the Sunshine Theater this would be the perfect place to show the same genre of movies now offered there.

I like how they still do other events, as well. I saw a live performance with Isabella Rosselini to a Guy Madden film about 10 years ago. In the big nice theater. It added to the whole thing.

I just saw, "Tom At The Farm.' earlier this week in one of the larger theaters up the stairs on the second floor. It was a beautiful room and quite large. I love it. Let's hope this place stays for a long time!!

these old theaters are real gems. i saw the newest mission impossible in the balcony of the old Uptown theater in DC last Friday afternoon and it was like being a kid again. such a fun time.

Hey, I love that place - saw Milton Berle there in Goodnight, Grandpa in 1983. ha.

So wonderful to read this in light of all the awful news of late, though B+H Dairy opening again has been a delight as well.

Back in the late 60s and ealry 70 it was a great Off-Off-Broadway theatre, with shows like the very scandalous at the time Oh! Calcutta (where everyone on stage got naked) then the first staging of the musical Grease before it went on to become a hit show on Broadway, and Man of La Mancha. There are lots of memories and ghosts haunting those old rafters.


To blue glass + everyone -- "the building is still beautiful and i hope remains with no further 'upgrades'" -- FYI, this building is an exterior as well as a [much rarer] interior landmark.

Warts and all, Terminator Genisys was fair as a summer popcorn yarn. Funny in some parts. I don't think too deeply about my summer popcorn escapist fare, really. If you go to movies like that, you really should know what you're getting already at this point. There's no surprises. Just air conditioning and chilling out.

I like this place and now that I know there will be matinee prices, on top of Regal Cinemas' new mandatory bag searching, I might be going here more often. I've seen many a flick here, but I think my fave time will always be seeing "Aladdin" in their largest auditorium some waaaaaaaaay years back and laughing my ass off.

I recall that the last theatrical production that was staged there was The Chosen by Chaim Potok; the only reason I remember that is that the marquee remained for a few years in the late 80s after the production had closed.

I see it's called a "musical flop" on this website.

David Wojnarowicz and Peter Hujar lived upstairs in a loft at this cinema until they both died of AIDS. This place is historic in many ways. I am shocked that nobody remembers how two iconic and extremely important artists of the 20th century where forced out of their home to make room for this renovation cinema in the 1990's.