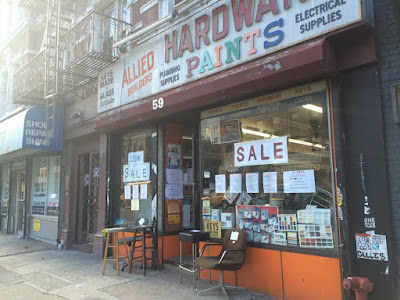 The family-run business is wrapping it up here at 59 Second Ave. between East Third Street and East Fourth Street after closing sales these past few weeks.

EVG reader Danielle Baskin stopped by the store yesterday, and learned that the owners have to turn over their keys to landlord Icon Realty on Friday. An auctioneer is coming by later today to take things in bulk, so there might not be too much left. 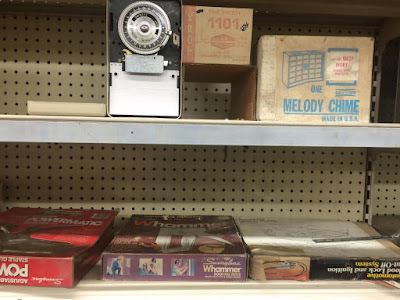 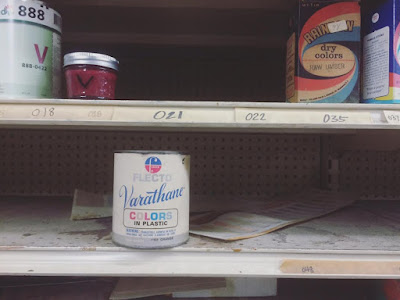 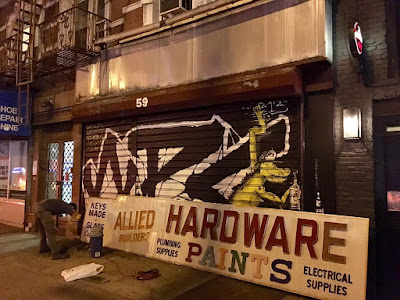 Apparently there's also a second Allied sign that lights up that is also for sale, though there aren't any bids yet.

The hardware store had apparently been on a month-to-month lease with the previous owner. Icon, who bought the building earlier this year, is now asking $26,000 for the space.

Icon is so disgusting.

Rude and unfriendly - what?? I have no idea what you could be talking about. That couple was always extremely helpful and friendly to me every time I went there over the years. I'll miss them in the neighborhood.

Sad. Icon seems to have dozens of empty storefronts not only in the EV, but all over town (I saw several in Yorkville a few weeks ago). Wouldn't it be more profitable from a business standpoint for them to collect at least some rent, rather than nothing, for months on end?

I always loved that paint sign over 2nd Ave!

If only that sign was smaller, I would have grabbed it.

This is heartbreaking. The owners are dear and lovely. I've purchased many gallons of paint there. Both even helped me choose a color for my walls. Since they are older, maybe they can retire and rest. They shouldn't have been pushed out however. Greedy fucking landlords.

Not to be happy at another place driven out by rent hikes, but that store was terrible.

Goodbye Allied! I never bought anything from you, but goodbye anyway.

Such a wonderful store and such wonderful owners. From the days when
hardware was still hardware, plus all kinds of everyday do-it-yourself
necessities. A big, old, ringing cash-register. Hand-written receipts, even.
Gracious and kind, honest and straightforward assistance. A lot of the neighborhood passed in and out of this place. I will miss it, terribly.
I wish them a great big silver lining in the cloud of closing before they wanted
to - a fascinating, exciting, happy, happy, happy-ever-after retirement.

Wonderful and gracious people owned this store. I live in the building next door and we will miss Allied. Nobody makes better keys. Sorry that your livelihood was taken by rapacious uber-capitalist Icon.