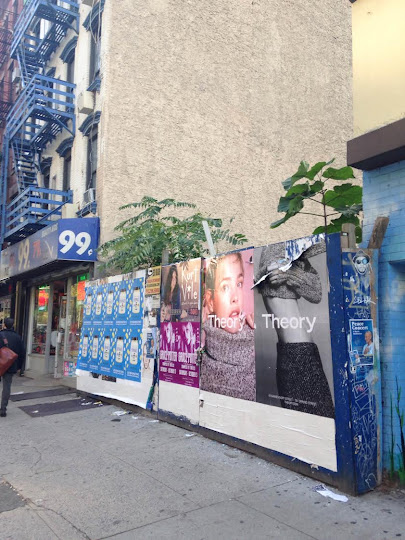 There's news about the long-dormant site on First Avenue adjacent to your favorite Rite Aid on East Fifth Street. After years of stops and starts and various renderings, the lot has been sold.

The legal wrangling is a little complicated. Here's some of it via The Real Deal, who first reported on the transaction:

Following a bitter internal battle for control of a long-stalled East Village development site, the owners have sold it to the Colonnade Group.

A group of partners including Ozymandius Realty and Orange Management closed last month on the $12.9 million sale of 75 First Avenue. 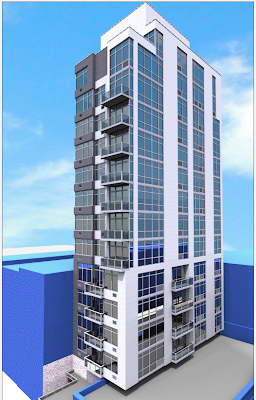 In April 2014, plans surfaced for an 8-story development that would look something like… 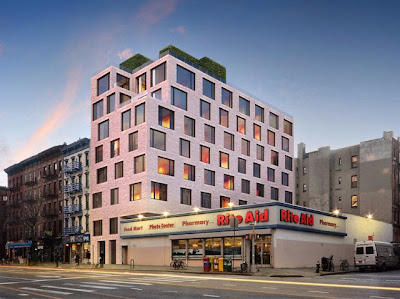 Permits indicate the development will span 34,055 square feet, with the bulk of the project dedicated to residential use. 8,456 square feet will be given to ground-floor retail, while the remaining 25,599 square feet will be divided between 27 units. 75 First Avenue will stand 80 feet in total.

There aren't any details at the moment about what the Colonnade Group plans to do with the lot. The DOB previously approved the plans for the 8-story building.

Long-stalled First Avenue site now has a brand-new rendering
Posted by Grieve at 4:22 AM

Well, whatever goes in we know it'll be ugly, but thank God it will only be eight stories of eye vomit instead of 14...

$12.9 million for a vacant lot on First Ave? People have been killed over loose change. This is going to get even uglier.

Why does the rendering make it look like half the apartments are on fire?

Anonymous 10:39, People like yellow lighting. It's warm and homey.

Not fire anon.....it's the residual glow of greed....you can see it all over NYC these days....just about EVERYwhere in the world actually.....can't seem to be put out.

Kind of like how that Rite-Aid just sits there like an outdated, near-useless single-story lump. I see it as a lazy "fuck you" to the forces of gentrification, modernization, basic supply-and-demand economics, etc. I am as weary about development as the next guy, but there is a property that needs to get its shit together and do something productive with its life.

That's a nice building rendering. I like how it blends into its surrounding environment.

Does the lot come with al the air rights to the corner lot? Must be since that wall of windows will never be blocked by whatever takes the Rite-Aid spot.