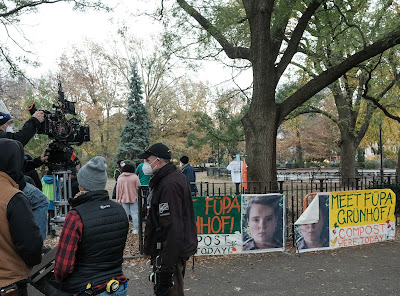 You may have seen the film crew in Tompkins Square Park today... 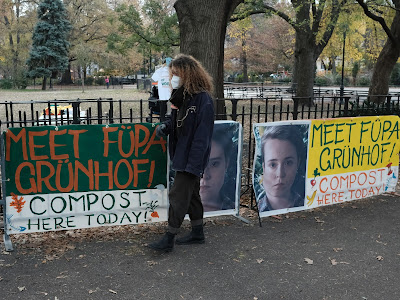 They were filming a scene for "Younger," the well-reviewed (99% on Rotten Tomatoes!) TV series from Darren Star ... the show's up to season 7, set to debut in early 2021. A PA told Steven this was for an episode to air in the spring. (And no word of any Hilary Duff sightings!)
A reader said that cast-and crew had a COVID-19 testing location inside the former St. Brigid School on Avenue B.
Thanks to Derek Berg for the photos ... and H/T Steven...
Posted by Grieve at 5:30 PM

Hillary Duff and Sutton Foster were seen filming there this afternoon

Caught a few seasons of this during the lockdown, since, for some reason, it was recommended by the algorithm. Needles to say, I find this show graceless and trite. And if it'd been a 40+ something man posing as a twenty-something man to date the 20-something females, I'm sure it'd been vilified. Then again, this is the same creator from SATC. Now I wonder if the rest of the 40-something females would follow suit (much like the Carrie Bradshaw wannabes trying to live the lux life and finding their Mr.Big in the NYC) would try to look like a 20-something so that they can date a cub. Maybe they are already. Only thing I tolerated this show is that it showed the livelier NYC pre-pandemic. Much like the very rare times I see bits of SATC when flipping through the channel that it shows NYC on its pre-gentrifed days.

In a related comment, I'm guessing a lot of the Midwesterner Emily wannabes will now would like to be like Emily Cooper (or Eerie Crapper as I call her) and move to Paris and live the life of Darren's Emily in Paris.

You obviously didn’t watch to the last couple of seasons. I hate when people like you come along and ruin things because you think others actually WANT to hear your vile opinions on every topic known to man. Go away troll.

Agree. What a pretentious biased review. You can tell someone made up the kind before even watching an ep, meh! Similar to Emily in Paris bashing


Btw I saw the filming pics on Dm and it looks so funny!

Miriam Shore, who plays Diana, is from our neighborhood. She bought a paving stone by the Temperance Fountain in TSP.

She plays my favorite character.

Is this the show in which, in a previous season, a character went to Tompkins Square Park to score drugs?

All she found were upper-middle-class parents with strollers!