Flyer alert: More about Love and Sex on 10th Street 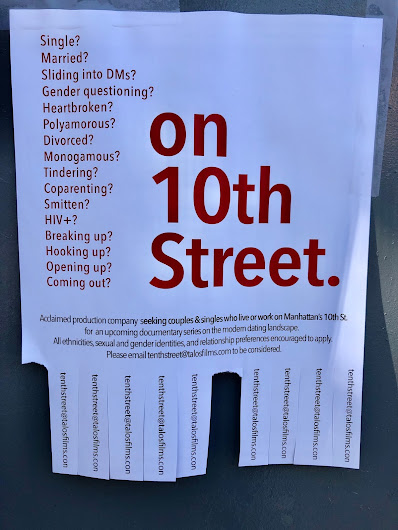 Last week, we noted the flyers spotted near and on 10th Street about an "acclaimed production company" that is seeking individuals and/or couples who live or work on 10th Street "for an upcoming documentary series on the modern dating landscape."
While there were those among us who thought this might be in the "guy-looking-for-a-girlfriend" guy orbit, we are assured that this is quite legitimate.
So far, there has been a lot of interested participants contact the number after seeing the flyers (and our post!), according to a rep for the production.
"The flyer was intentionally a little vague to not reveal too much about the project — it's in early stages of development with Imagine and Talos Films," the rep said.
They're now actively casting for the documentary series that seeks to "authentically capture love and sex across 10th Street."
"We’re looking for folks from all walks of life, in all kinds of stages of partnership," the rep said.
And why this street?
"We picked 10th Street because it’s such a culturally and socioeconomically diverse cross section of the city, the battleground of the gay rights movement, and — anecdotally — a place where a lot of hookups/breakups/makeups take place!"
The email: tenthstreet@talosfilms.com
Posted by Grieve at 1:30 PM

"anecdotally — a place where a lot of hookups/breakups/makeups take place!" - Based on what? And when? Nowadays? Guess these people never been to Ludlow...