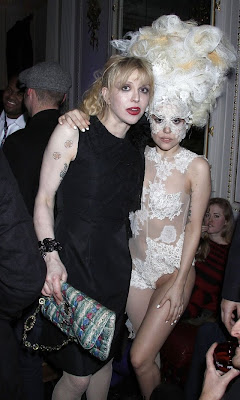 Via. (Thanks to Lux Living)
Posted by Grieve at 9:13 PM No comments: 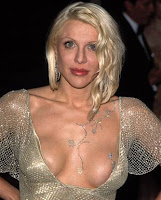 It only took Courtney Love eight hours to trash her high-end hotel room at The Inn on Irving Place.

While the rocker was visiting New York on June 17 with her 16-year-old daughter, Frances Bean, sources say Love completely ruined her accommodations.

The hard-partying 44-year-old widow of Kurt Cobain left dirty needles and used feminine hygiene products behind, according to sources, and also flooded the floor.

We're talking about Courtney Love again for some reason. On Wednesday, Gothamist linked to a Q-and-A that Love did with Heeb. (In case you missed the East Village portion of the interview, I excerpted a portion of it below.) So maybe she'll move back to NYC. (Alex at Flaming Pablum has an opinion on this topic.)

All this Love talk brought me back to the tabloids and blogs recreating her magical evening in NYC on March 17, 2004, when, among other things, she hit a dude on the head with a mic stand, flashed her boobies and got arrested, though not necessarily in that order. Some flashing happened at Wendy's on 14th Street just west of Union Square. Where the photo above was snapped. The dude posing near her breast is Kofi Asare. But what I want to know: Who is the fellow on the right? Where is he today? And why is Love wearing white before Memorial Day?

So here's the end of the interview between Karen Bookatz and Love from Heeb:

Thanks.
Oh, and I have a question, totally off of the topic. In terms of real estate, like, a Williamsburg girl like you, what do you think about that West Village, um, thing that Gwyneth and Scarlett said? I mean, do you think that like, okay, this is going to sound retarded: Am I too famous to live in the West Village? Or, is it OK?

Um, the West Village is like, really awesome, and like really beautiful and quaint. Like who else lives there? Liv [Tyler] and Sarah Jessica [Parker]. . .
Kyle [Maclaughlin] lives there, Michael [Stipe] lived there. Now he lives in SoHo, but Julie, well she’s not famous. Doesn’t Drew [Barrymore] live there?

Yeah, that’s why I sort of moved out. But for your purposes, the West Village is cool.
My purposes are to be safe. I don’t have to go out every fucking night.
Posted by Grieve at 6:38 AM 6 comments:

Email ThisBlogThis!Share to TwitterShare to FacebookShare to Pinterest
Labels: 14th Street, Courtney Love, excuse for a gratuitous photo of boobies

From Page Six Magazine this week:

Courtney Love is searching for an East Village walk-up so she can live like writer Edith Wharton. The only problem? Friends like Gwyneth Paltrow and Scarlett Johansson have tried to talk the messy rock icon out of moving anywhere without a doorman — but Courtney isn't taking them seriously, telling friends, "They're just being goddesses, and I'm a normal woman."

(Also, in the same column...read about BFFs Sarah Palin and Ivana Trump. At your own peril.)
Posted by Grieve at 7:56 AM 3 comments: