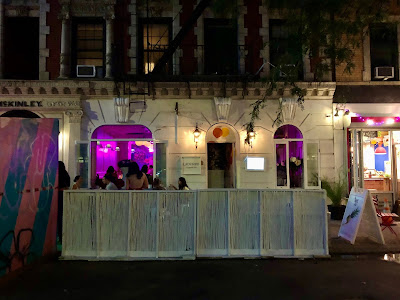 The second outpost of Ladybird, the vegan tapas and wine bar, is now open at 111 E. Seventh St.
As we reported early last month, Ravi DeRossi's plant-based Overthrow Hospitality decided to open another Ladybird in the open space in the building instead of launching a new concept. Ladybird II takes over for DeRossi's Saramsam, a Filipino restaurant that debuted last September and quietly closed in May.
Across the street, DeRossi is also opening another space for Cadence, his hit vegan soul food restaurant that debuted this spring, next door to the current sliver of a location No. 122. 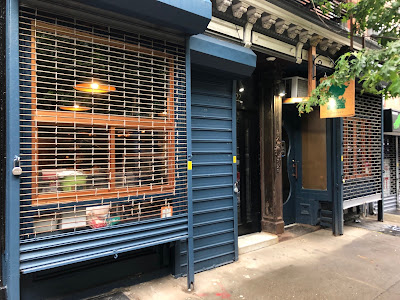 The new Cadence outpost will be open a little later this fall.
Cadence chef Shenarri Freeman has been praised for her creative cooking. In early August, Pete Wells at the Times gave the place high marks, noting: "In the increasingly crowded world of vegan and vegetarian restaurants, Cadence occupies a niche of its own."
"Both [Ladybird and Cadence] are at capacity almost every night of the week. It just made sense to expand them, either that or relocate them to larger venues," DeRossi told us last month.
Posted by Grieve at 4:53 AM 4 comments: 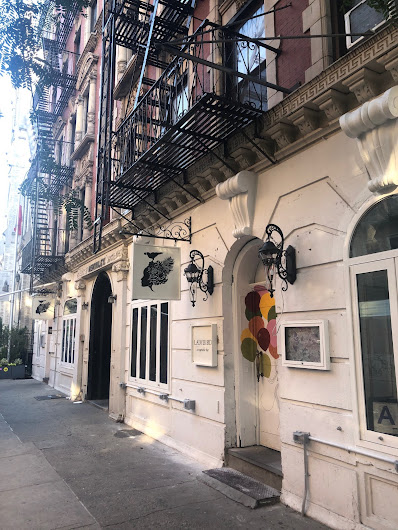 You're not seeing double at 111 E. Seventh St. — there are now two outposts of Ladybird, the vegan tapas and wine bar, at this address.
And this won't be the only restaurant from Ravi DeRossi’s plant-based Overthrow Hospitality to open a second space on this block between Avenue A and First Avenue.
DeRossi is also opening another space for Cadence, his hit vegan soul food restaurant that debuted this spring, next door to the current sliver of a location at 122 E. Seventh St.
He is known for dabbling in various vegan concepts with his chefs. "I really love opening new restaurants and working with young chefs to create these new concepts," he told EVG via email.
However, here, he decided to stick with formulas that are working.
"Both restaurants are at capacity almost every night of the week. It just made sense to expand them, either that or relocate them to larger venues," DeRossi said. "We have opened three new restaurant concepts [Soda Club, Etérea and Cadence] in the past five months — I didn't have the energy for a fourth right now."
Ladybird II, which DeRossi expects to open (with a new brunch service) in about three weeks, takes over for Saramsam, a Filipino restaurant that debuted last September and quietly closed in May.
This was the third restaurant that DeRossi tried in the space, following Fire & Water and Night Music. Tony Mongeluzzi, the first chef for Fire & Water, unexpectedly passed away in September 2018. The chef for Night Music left NYC at the start of the pandemic.
"We had a string of bad luck," DeRossi said. "With the success of Ladybird next door, it just made sense to expand. Definitely not the most fun decision but hopefully the smartest decision."
As for Cadence, the new space next door will be ready in about two to three months (they recently applied for a new liquor license).
Chef Shenarri Freeman has been praised for her creative cooking. This week, Pete Wells at the Times gave the place high marks, noting: "In the increasingly crowded world of vegan and vegetarian restaurants, Cadence occupies a niche of its own."
Posted by Grieve at 5:00 AM No comments: 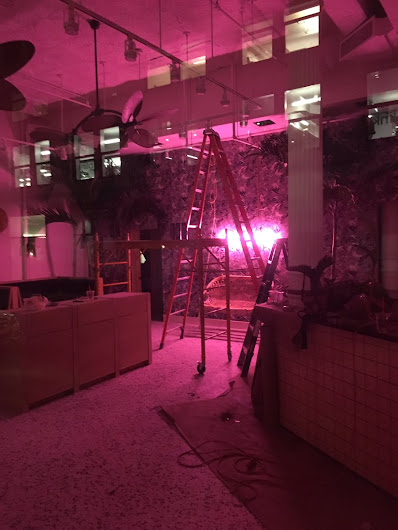 Broken Coconut, the health-conscious restaurant from Butter/1Oak founder Scott Sartiano, opens today at 15 E. Fourth St. between Lafayette and Broadway, according to the Post.

The Post notes the menu will include a probiotic, protein-rich yogurt with a coconut base.

Previously on EV Grieve:
Checking in on the former Other Music space, soon to be a health-focused restaurant 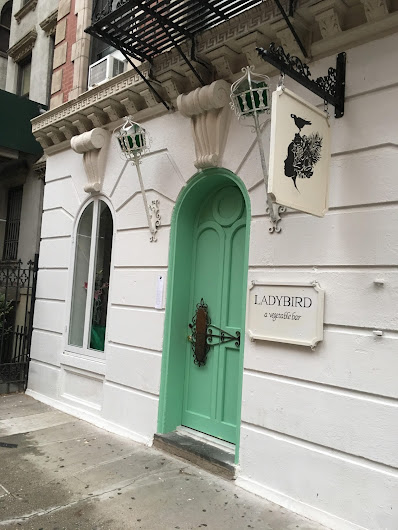 Ravi DeRossi's vegan bar-restaurant opened at 111 Seventh St. between Avenue A and First Avenue on Sept. 5. Eater has more about the space, which counts musician/animal-rights activist Moby as an investor. 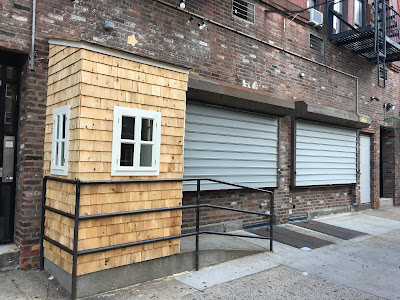 The Lost Lady, from Robert Ceraso and Jason Mendenhall, the co-owners of The Wayland and Good Night Sonny, opened last Wednesday at 171 Avenue C between 10th Street and 11th Street. This marks their third attempt at opening another bar along Avenue C. Plans for both the former Duke's space and current Royale fell through.

The space was originally going to go by The Drift Inn.

"Somebody opened a bar called the Drift Inn in Brooklyn a couple of months after we started working on that space," Ceraso told me earlier this summer. "It actually makes more sense for the space now. Once we got in there and started getting a feel for the bones of the space, our design went a lot more old nautical feeling. The Lost Lady feels to us like it could be the name of an old ship or a story that a fisherman would tell you."

Grub Street has a preview of the Lost Lady here. 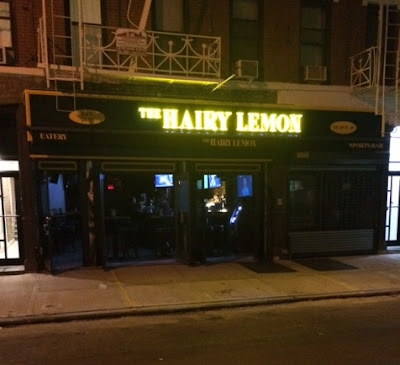 Previously on EV Grieve:
Croxley Ales-replacing bar on Avenue B is called the Hairy Lemon
Posted by Grieve at 4:06 AM 8 comments:

Ladybird about a month away from opening on 7th Street 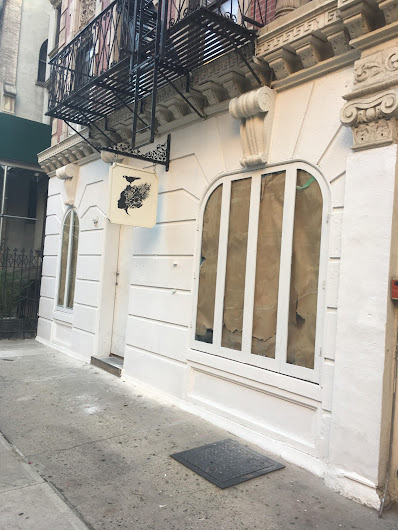 The exterior is shaping up over at 111 E. Seventh St. between Avenue A and First Avenue, where Ravi DeRossi has relocated his vegan tapas bar Ladybird ... the signage arrived this week... 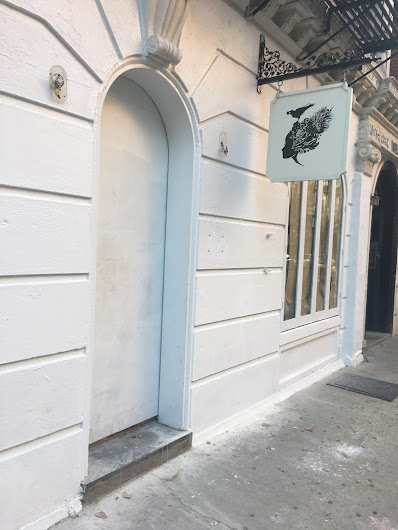 Despite the progress from the outside, DeRossi said in an email that they're still a month out from opening.

For a quick recap: This space was home to DeRossi's Bourgeois Pig, which relocated to the West Village after 10 years due to an increase in rent. He changed the name to Ladybird last summer as his restaurants started going meat free. (Ladybird sends part of its profits to DeRossi's BEAST Foundation, a non-profit organization dedicated to ending animal cruelty.) And now Ladybird has migrated to the east, as we first reported in April.

The previous No. 111 tenant, the wine bar Virgola, closed last October after 10 months in business. 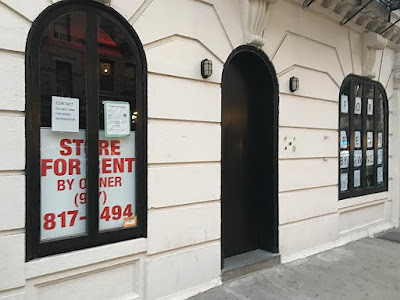 Last summer, restaurateur Ravi DeRossi turned his Bourgeois Pig into vegan tapas bar Ladybird over on MacDougal Street in the West Village. (DeRossi started going meat free on the menus at his establishments in early 2016. Ladybird sends part of its profits to DeRossi's BEAST Foundation, a non-profit organization dedicated to ending animal cruelty.)

Now, DeRossi plans to relocate Ladybird to 111 E. Seventh St. between Avenue A and First Avenue — the original home of The Bourgeois Pig before its move to the West Village in late January 2015. (Eater reported back in November 2014 that a rent increase was behind DeRossi's decision to pack up the 10-year-old bar.)

"The landlord has offered me a very fair deal, so I have decided to move Ladybird from MacDougal to Seventh Street, where it should have been in the first place," DeRossi, whose home and office is in the East Village, told us via email.

Next month, he will appear before CB3's SLA committee for a new beer-wine license for No. 111.

The previous No. 111 tenant, the wine bar Virgola, closed last October after 10 months in business.
Posted by Grieve at 4:22 AM 4 comments: