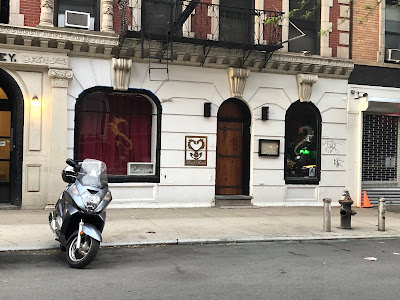 Restaurateur Ravi DeRossi is currently enjoying the opening of Honeybee's over at 95 Avenue A.

Meanwhile, though, one of his other establishments, Fire & Water, remains dark at 111 E. Seventh St.

Tony Mongeluzzi, the corporate executive chef of DeRossi's restaurant group DeRossi Global, which includes Ladybird, Avant Garden and Death & Co., had been working on the Fire & Water menu — veganizing sushi and dim sum — for a year before the restaurant was set to open last fall here between between Avenue A and First Avenue.

"He had been with my company for many years. He was a very close friend and one of the best chefs I have ever come across in my life — vegan or not," DeRossi said in an email on Saturday. "He tragically passed away just a few weeks before we were supposed to open."

"We tried to make it work with another chef but failed miserably. Our hearts just weren't in it," DeRossi said. "So for now the space is closed while we figure out what to do next."
Posted by Grieve at 4:15 AM