Honeybee's debuts on Avenue A 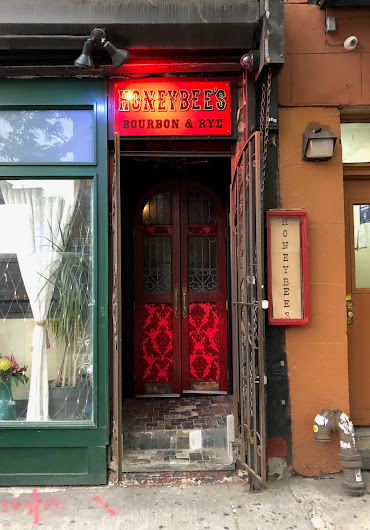 Honeybee's is up and running now — as of Wednesday — at 95 Avenue A.

The restaurant, specializing in plant-based Texas BBQ and bourbon and rye, takes the place of Cienfuegos here at Sixth Street.

As we first reported back in November, restaurateur Ravi DeRossi said that it was time to change up concepts at Cienfuegos, which closed in January after nearly a 10-year run.

Time Out has a quick preview/review:

[T]he second-floor walk-up is made to look like a saloon from the Wild West meets a burlesque bar. The resulting effect is an environment that comes off a bit tacky, but with some damn good plant-based smoky dishes that are just as delicious and convincing as when made with real meat. The offerings which span "ribs," pulled "pork," and burnt ends (made from alternatives like seitan and mushrooms) are prepared with traditional BBQ techniques: brining, marinating, smoke-infusion and roasting.

Food & Wine also has a preview/review, only with more adjectives:

“I tried to keep my [barbecue] methods as traditional as possible,” says Gharib, who says that she’s conjuring flavors of the American South with a low temperature smoker, a stove top cooker, and a cold smoker. Her menu is built from a balance between vegetables and protein replacements made from soy or gluten, and enriched with house-made, plant-based takes on staple Southern ingredients like heavy cream, buttermilk, and sour cream — each made from a soy milk base.

The corner space on Avenue A and Sixth Street also houses two other DeRossi operations — Mother of Pearl and Amor y Amargo.

Previously on EV Grieve:
A concept revamp for the Cienfuegos space on Avenue A
Posted by Grieve at 4:00 AM