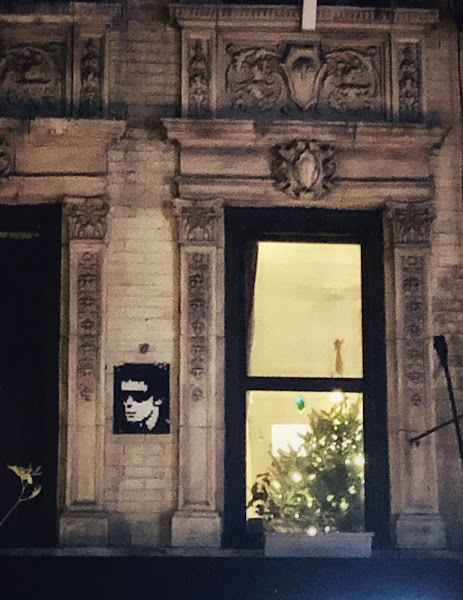 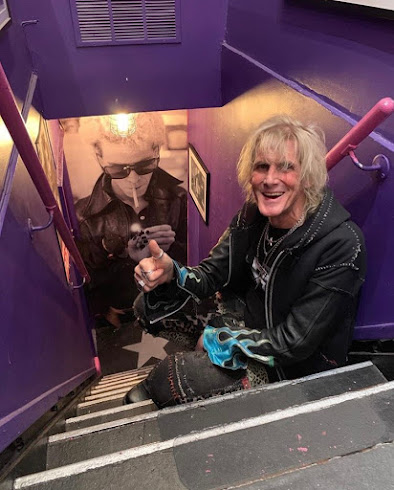 Borrowing this shot from the I Need More Instagram feed... Here's Jimmy Webb, owner of the rock 'n' roll boutique at 75A Orchard St. between Broome and Grand, with a new life-sized photo of Lou Reed in the shop.

The photo of Reed is by Michael Zagaris. 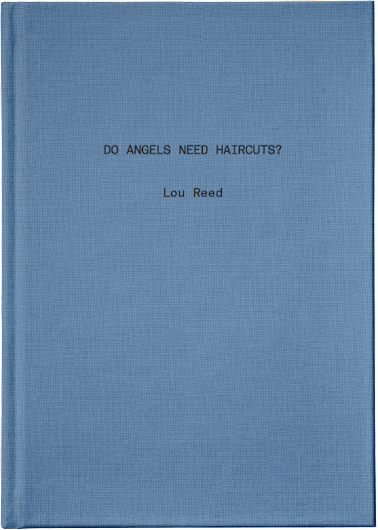 In case you missed this news (via Pitchfork and The Guardian)... on what would have been Lou Reed's 76th birthday yesterday, Anthology Editions announced a new book of his unreleased poetry.

In August of 1970, a 28-year-old Lou Reed quit the Velvet Underground, moved home to Long Island, New York, and embarked on a fascinating alternate creative path: poetry. "Do Angels Need Haircuts?" is an extraordinary snapshot of this turning point in Reed’s career.

Gathering poems, photographs and ephemera from this era (including previously unreleased audio of the 1971 St. Mark’s Church reading), and featuring a new foreword by Anne Waldman and an afterword by Laurie Anderson, this book provides a window to a little-known chapter in the life of one of the most singular and uncompromising voices in American popular culture.

The book is due out next month.
Posted by Grieve at 9:27 AM 1 comment:

Love and loss at the 'Halloween Parade'

Here's Lou Reed with a live performance of "Halloween Parade" (off the New York album) from 1989.

Enjoying the classics with Lou Reed

In case you haven't heard this interview making the rounds the last day or two… PBS released another interview in its Blank on Blank series, this time with a conversation with Lou Reed from 1987… where he puts down everyone from the Doors ("What I mean by 'stupid,' I mean, like, the Doors") and the Beatles ("I never liked the Beatles … I thought they were garbage").

The interview does not go well. 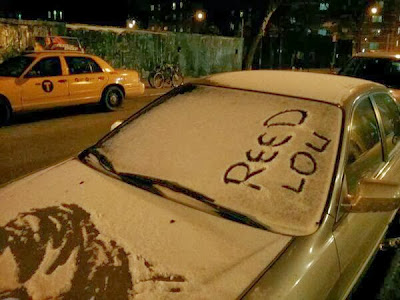 Photo by @SeanCarlson tonight on East 11th Street between Avenue A and First Avenue...

Headline h/t
Posted by Grieve at 10:46 PM No comments:

They don't make TV commercials like they used to: Lou Reed stumps for 'Sally Can’t Dance' 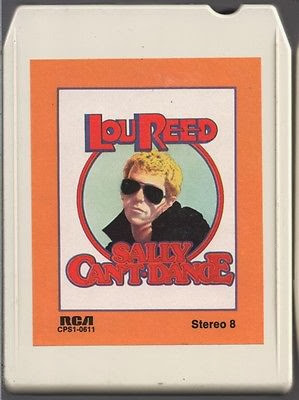 Wait, what? A Lou Reed TV commercial from 1974? At the height of his speed-shooting, bleached-blonde black nail-polish bi/gay persona? That’s right, apparently someone thought it was a good idea to push the Rock-n-Roll Animal’s career over the airwaves before it peaked. It’s not like a stone cold FREAK such as Lou Reed was going to get on American television otherwise was it?

Head on over to Dangerous Minds for more on the album...
Posted by Grieve at 3:49 PM 4 comments: 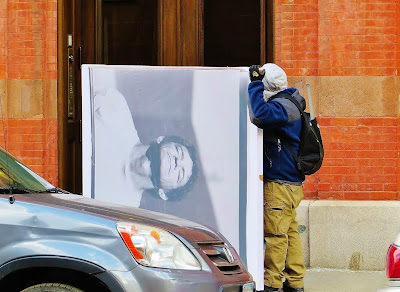 Spotted on East Eighth Street and Avenue B this afternoon… (a copy of) the large format Polaroid of the late musician taken in Montauk in 2002 by Julian Schnabel … from the book "Julian Schnabel: Polaroids." 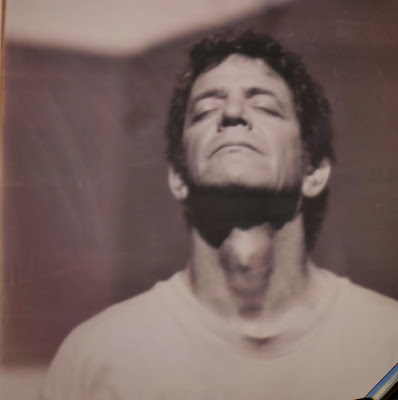 Photos by Bobby Williams
Posted by Grieve at 6:32 PM 5 comments:

A memorial for Lou Reed at Tompkins Square Park 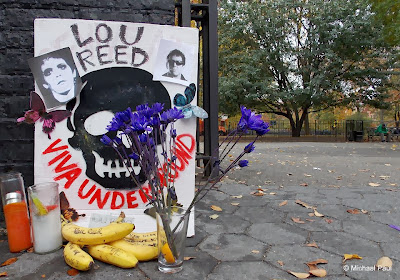 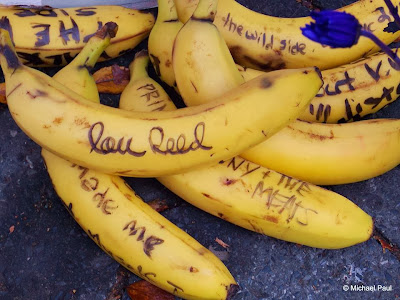 Meanwhile, Laurie Anderson reflects on her 21 years with Reed in an essay published at Rolling Stone:

I have never seen an expression as full of wonder as Lou's as he died. His hands were doing the water-flowing 21-form of tai chi. His eyes were wide open. I was holding in my arms the person I loved the most in the world, and talking to him as he died. His heart stopped. He wasn't afraid. I had gotten to walk with him to the end of the world. Life – so beautiful, painful and dazzling – does not get better than that. And death? I believe that the purpose of death is the release of love. 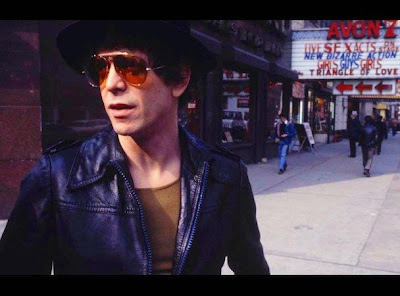 Lou Reed is recovering after a life-saving liver transplant at Cleveland Clinic, Laurie Anderson told the Times of London in an article published today.

She said that the 71-year-old Brooklyn-born Reed isn't back to full strength, but "he's already working and doing t'ai chi.

"I don't think he'll every totally recover from this, but he'll certainly be back to doing [things] in a few months," she said. "I'm very happy. It's a new life for him."

[Photo outside the The Avon 7 cinema on Seventh Avenue via the Lou Reed Facebook page]
Posted by Grieve at 11:13 AM 2 comments:

The Lou Reed tags have seemingly been everywhere of late ... now, as this photo by EV Grieve reader Peter D. shows, someone even tagged one of the lions that protects the St. Mark's Church in-the-Bowery on Second Avenue at 10th Street... 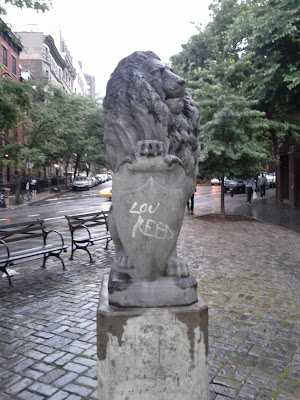 Rev. Guthrie bought the two lion sculptures in the 1920s, according to the church's website. The lion is the symbol of St. Mark.
Posted by Grieve at 6:37 AM No comments:

An Egg Cream for you

Shall we dare a Columbia student to shout out a request for "Sweet Jane"? 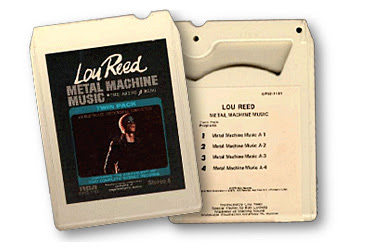 [UPDATED] Lou Reed is NOT performing Metal Machine Music next Friday at Miller Theatre on Columbia's campus. An orchestra is. Oops. $7 with a student ID.

For some reason I never noticed this Lou Reed street art on Attorney Street... 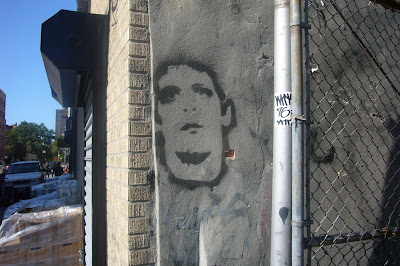 For no reason. Good use of "Vicious" perhaps?
Posted by Grieve at 5:00 PM 2 comments:

Email ThisBlogThis!Share to TwitterShare to FacebookShare to Pinterest
Labels: grindhouse, Lou Reed, spending too much time on YouTube

A few of the Lou Reed/Supreme ads are left hanging around...Such as this one on East Seventh Street near First Avenue... 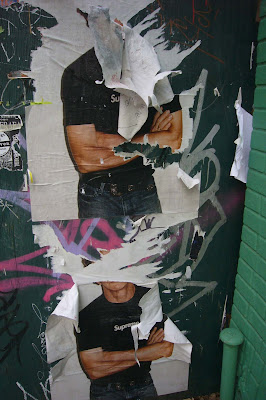 ...and this one on East Third Street near Avenue C. 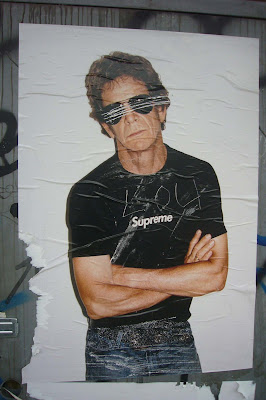 Previously on EV Grieve:
Top that, Kermit
Posted by Grieve at 5:48 AM No comments:

What do Kermit the Frog and Lou Reed now have in common? 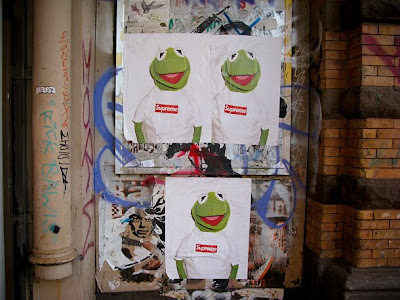 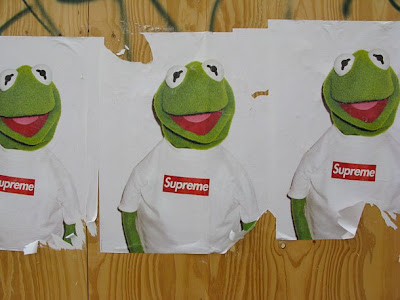 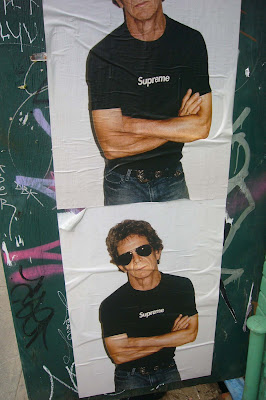 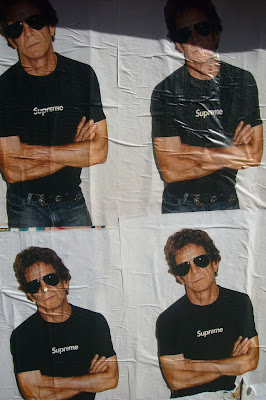 [Kermit photos via Allen AKA]

Happy birthday, Lou Reed (Flaming Pablum)
Posted by Grieve at 6:41 AM No comments: