In our post yesterday about the new apartment building on East 11th Street ... Dave on 7th noted that the building adjacent to the lot, 533 E. 11th St., served as the exterior for "The Super," a rather painful comedy (co-written by Nora Ephron too) from 1991 starring Joe Pesci.

And the plot: "Karma comes into play when a wealthy wisecracking landlord is ordered by a court to live in the filthy building that he runs."

The movie provides a nice time capsule for the neighborhood circa 1990-1991, as you can see in this clip that Dave on 7th sent along... 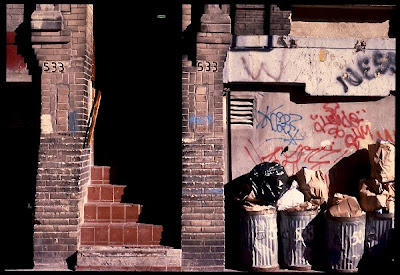 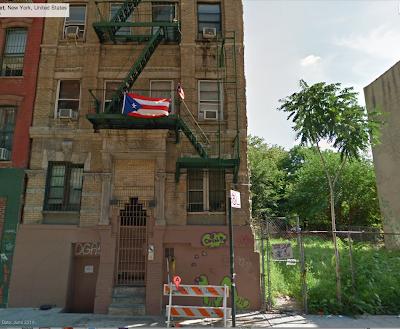 Easy as One Two Three

I've been kicking around the idea of seeing the "The Taking of Pelham" remake. So-so reviews. I know people who really liked it, though. Perhaps it's one to sneak a few beers into. Help pass the time.

Anyway, over at Runnin' Scared, Roy Edroso compared what "New York on film means now, and what it meant when the 1974 Joseph Sargent version ... was new." He seems to sum up exactly why I'm not hurrying to throw $12.50 at the theater.

A few of his points:

"In the 1974 film, the low-ceilinged control center, the glimpses of grim city streets, and Mr. Green's crummy walk-up at the finale suggest enough of the battered old New York to make an impression. There aren't too many physical details that stand out in the new 123..."

"The old film has a comic undertone that the new one can't afford. 2009's jacked-up pace is part of it, but it's also a philosophical difference. In the new film everyone's playing for high stakes all the time, clenched like fists. In the old film, most characters show some weary resignation, which is something city folk have to learn if they're to keep going."

And here's a little filmstripesque sequence from the first film... when the transport of the ransom money gets sidetracked at Astor Place. 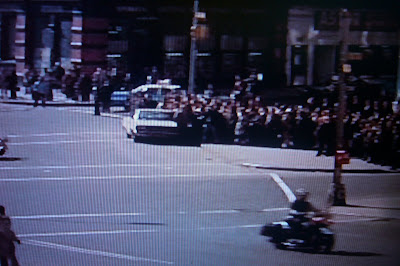 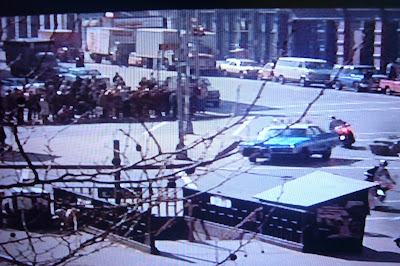 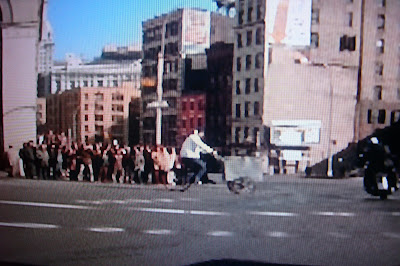 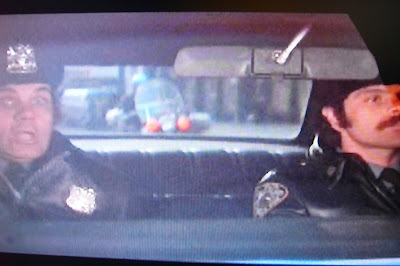 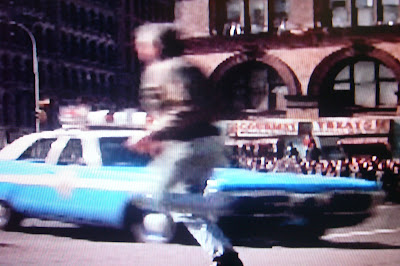 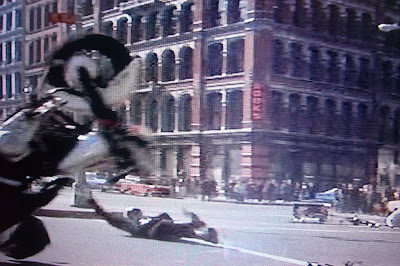 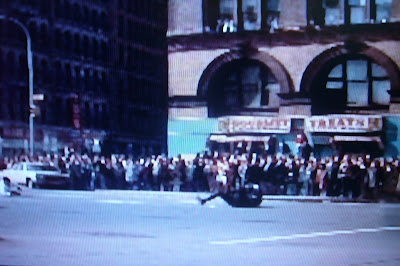 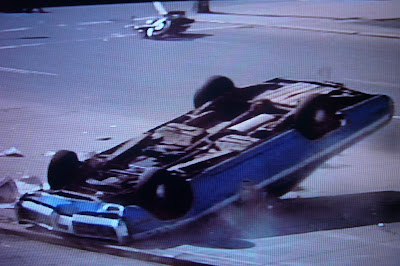 The ransacking of Pelham One Two Three
Posted by Grieve at 6:58 AM 5 comments:

Email ThisBlogThis!Share to TwitterShare to FacebookShare to Pinterest
Labels: 1970s New York, movies that we will never see, New York in the movies, The Taking of Pelham One Two Three

Posts that I never got around to posting: The trailer for the "Bad Lieutenant" remake

The Vulture over at New York magazine has information and the trailer for Werner Herzog's Nicolas Cage–starring remake of "Bad Lieutenant."

Does this make you feel any better about the project?

The 1976 version of "King Kong" is playing on AMC these days. It's fun in that hey-here's-an-awful-movie-playing-now-on-AMC-and-don't-Jessica-Lange-and-Jeff-Bridges-make-a-nice-couple? kind of way.

The "Eyes" have it: For five bucks 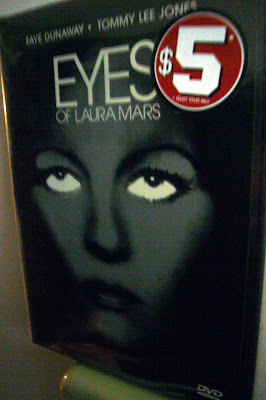 Back in January we linked to a post the Bowery Boys did on the old NYC howler "The Eyes of Laura Mars" starring Faye Dunaway. A friend of EV Grieve reported that this hammy laugher was in the $5 bin at the Union Square Virgin Megastore... well worth the hours of entertainment the film will provide. Uh, in other words, I bought a copy.
Posted by Grieve at 9:03 AM 2 comments:

Looking at "The French Connection"

"The French Connection" won five Academy Awards, including for Best Picture and Best Actor (Gene Hackman). In honor of the 1971 classic's Blu-ray release on Tuesday, the Post spoke to director William Friedkin about making the movie on the sly in NYC. The Post included a chart showing some of the locations...(click the image to enlarge) 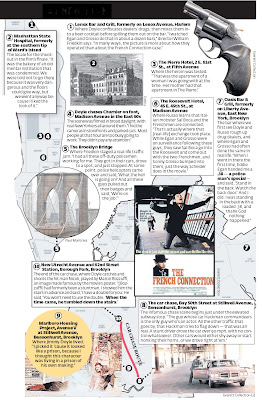 The bowery boys had some nice observations on this classic when it played during the summer of 2007 at the Film Forum.
Posted by Grieve at 2:35 PM No comments:

Email ThisBlogThis!Share to TwitterShare to FacebookShare to Pinterest
Labels: film classics, New York in the movies, The French Connection

Ah, the Bowery Boys do justice today to a long-lost (unintentionally hilarious!) NYC classic...The Eyes of Laura Mars from 1978. With Faye Dunaway fresh from winning an Oscar for Network. As the Bowery Boys put it:

As such, it seems a thin but playful satire of downtown New York decadence. Manhattan looks unusually great for such a commonplace horror flick. The best set is easily Mars' studio, in one of the Chelsea warehouses piers overlooking the Hudson River, just steps from the West Side elevated highway. The most notable -- and campy scene -- erupts at Columbus Circle, at a ridiculous fashion shoot involving burning cars and models in lingerie and fur coats. Oh Columbus Circle! Were you ever so fun?

You get a taste of Hell's Kitchen in a brisk chase scene involving Tommy Lee Jones' cop character, his feathered hair flapping in the wind. But seeing Soho was more striking to me, devoid of shopfronts, mysterious flat warehouses during the day that open to become large, disco-thumping galleries at night. There are still galleries in Soho, of course, but the one in 'Laura Mars' is a big, hokey circus. (The director even condescendingly throws in a dwarf, to get the point across.)

Here's a trailer/infomercial for the film....

And those memorable, uh, lines...

So do you think they bought the 1-Day Fun Pass from the MTA?

Email ThisBlogThis!Share to TwitterShare to FacebookShare to Pinterest
Labels: Frank Sinatra, looking at old New York, New York in the movies, On the Town

On the list for the Halloween season were two movies with some fine NYC scenery. There was Wolfen with Albert Finney from 1981. NYPD detective Finney investigates some grizzly murders...and there's some amazing footage of the city, particularly the South Bronx, from that era:

Bringing out the Dead from 1999, fair-to-middling for a Martin Scorsese film, is stylish enough. Nicolas Cage -- before he morphed into the Grade-A buffoon -- is the Manhattan medic losing his mind. And here's nice usage of Janie Jones by the Clash.

Posted by Grieve at 6:07 PM No comments:

Email ThisBlogThis!Share to TwitterShare to FacebookShare to Pinterest
Labels: New York in the movies

Rosemary's Baby begins a one-week run today at the Film Forum. Will McKinley writes an appreciation of the Roman Polanski classic in this week's issue of The Villager. As for me, I love the intro...

Righteous Hams 2: Bad to the Bone 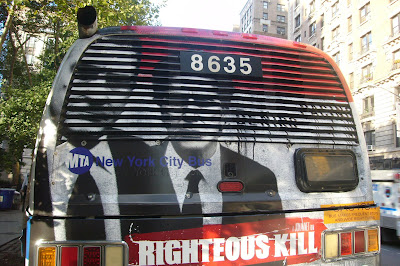 Oh, and the Post gave the film one star. Lou Lumenick, taking a break from being a dick to Roger Ebert, writes: Al Pacino and Robert De Niro collect bloated paychecks with intent to bore in "Righteous Kill," a slow-moving, ridiculous police thriller that would have been shipped straight to the remainder bin at Blockbuster if it starred anyone else.

And in the Times, Manohla Dargis writes: In “Righteous Kill” these two godheads of 1970s cinema go macho-a-macho with each other — furrowing brows, bellowing lines, looking alternately grimly serious and somewhat bemused — in a B-movie (more like C-minus) duet that probably sounded like a grand idea when their handlers whispered it in their ears.
Posted by Grieve at 7:00 AM No comments:

Email ThisBlogThis!Share to TwitterShare to FacebookShare to Pinterest
Labels: Al Pacino, bad movies we may love, New York in the movies, Robert DeNiro 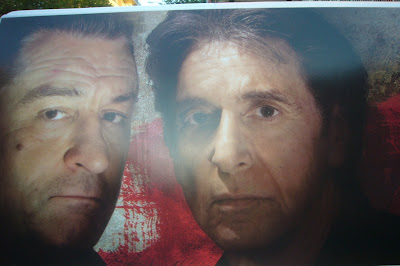 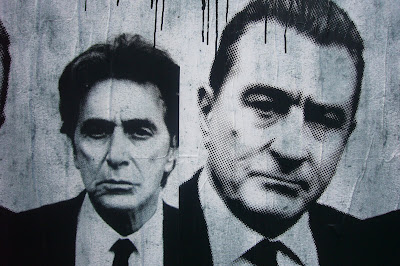 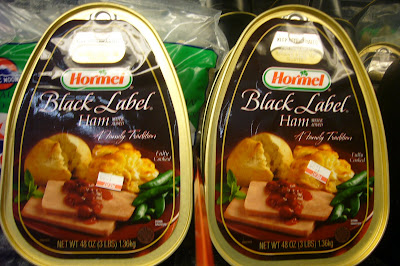 "They're like Lennon and McCartney." Righteous Kill opens Friday.


Meanwhile, Pacino in Panic in Needle Park tomorrow night at the Anthology Film Archives at 7.

Posted by Grieve at 6:28 AM No comments:

"You don't have to spend a million to look like a million!"

Gawker had a good thread Saturday night in which weekend editor Ian Spiegelman asked, "What's your favorite movie or TV show where the Big Apple and its culture, sensibility, and aesthetic is intrinsic to the narrative?" (There were nearly 400 responses...) Here's a clip provided by commenter Dickdogfood. It's a series of commercials from WNEW-TV from 1985. The first ad, for the Ritz Thrift Shop, is a classic:

No word on Cloverfield 2, though

At least three pictures at this year’s Toronto Film Festival "take an unusually deep look at the city as it roiled its way through the messy, magnificent, slightly mad 1970s." (New York Times via Gawker)
Posted by Grieve at 4:35 PM 1 comment:

We don't usually do this kind of thing here. But! Seeing as Kiss is the second-greatest band from New York who liked to get gussied up, we're making an exception! Anyway, Kiss co-founder Gene Simmons was born on this date in 1949 (born Chaim Witz in Haifa, Israel). He and Queens native Paul Stanley formed Kiss in New York in December 1972.

Simmons, of course, is also featured in two of the greatest motion pictures ever made.


And! The masterpiece: Kiss Meets the Phantom of the Park from 1978:


Meanwhile, AMC took to Coney Island to discuss Kiss Meets the Phantom of the Park (via Kinetic Carnival)


We imagine Gene will be doing some really low-key today to celebrate.
Posted by Grieve at 10:57 AM No comments: