The return of the anonymous, animal-loving snow shoveler of the East Village 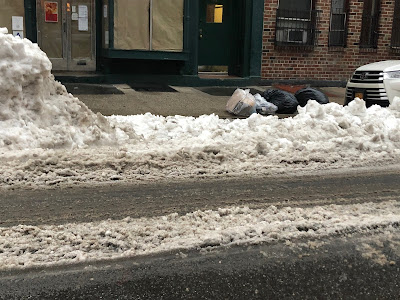 Residents still digging out from Monday's blizzard are receiving an assist... and it's a familiar name for some of you — the anonymous, animal-loving snow shoveler.
You may recall this story from the snowy days of 2016... an anonymous individual who voluntarily shoveled out snowbound cars (see the links below) ... leaving behind a note explaining the act of kindness ... anyone who wanted to express his or her gratitude could donate to the shoveler's favorite cause — Mighty Mutts/Ollie's Place Animal Rescue.

Here's more from the snow shoveler last evening via email:

I wanted to let people know that I've been shoveling out random cars again and it's too wet out to leave notes on cars.

If someone wants to make it clear that they don't want their car shoveled out they can. If I've already shoveled someone's car and they are furious I can put the snow back. I am extremely careful and never touch the cars.
As in the past no one should feel any obligation for the service. It is something I enjoy doing and I'm getting some exercise but if they want to make a donation to Mighty Mutts/Ollie's Place Animal Rescue, go for it. 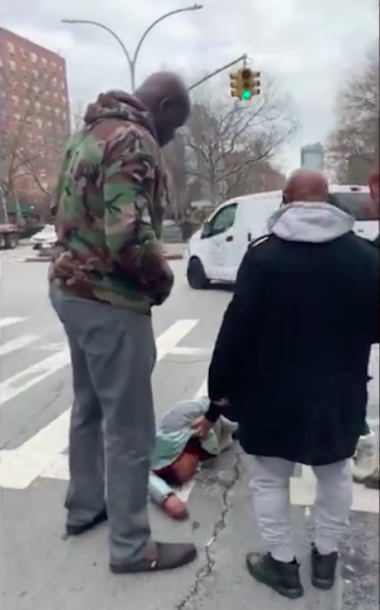 In news about former NBA superstars today... Shaquille O'Neal was among the good samaritans who stopped to aid a woman who had fallen in the intersection at Pitt Street and East Houston. (Shaq was a passenger in an SUV heading toward the FDR when the incident occurred.)

In footage obtained by TMZ, the current TNT NBA analyst "helped stop traffic and waited with the woman until an ambulance arrived."

The woman was said to be diabetic, and fainted while crossing Pitt Street to Avenue C.
Posted by Grieve at 7:24 PM 5 comments:

More about the anonymous, animal-loving snow shoveler of the East Village 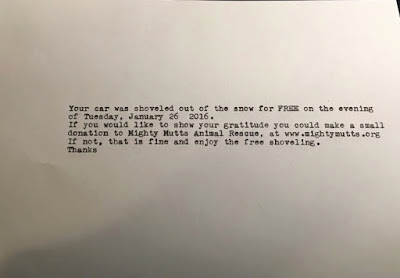 Yesterday, we posted about an individual who voluntarily shoveled out a snowbound car on East Seventh Street between Avenue A and Avenue B... and left behind a typewritten note suggesting that if the car owner wanted to show his or her gratitude, he or she could make a small donation to Ollie's Place/Mighty Mutts Animal Rescue on East Ninth Street...

And here is the car that the person shoveled out... 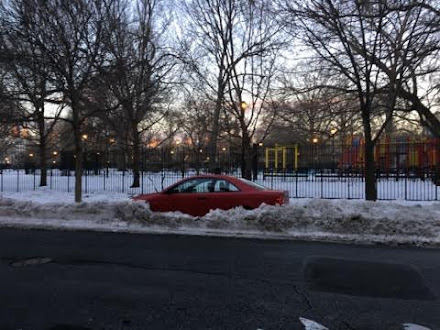 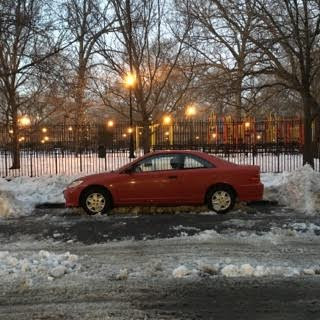 Last evening, the resident shoveled out another car in the neighborhood and left a similar, typewritten note... 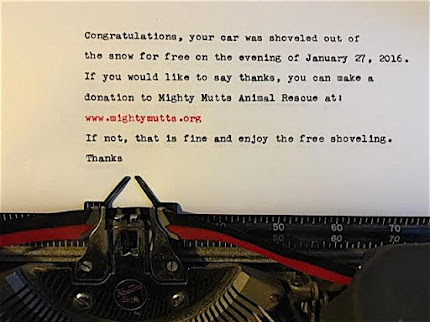 We tracked down the resident and asked a few quick questions about his or her actions...

On what made them decide to do this:

I like shoveling snow. I know that sounds a bit weird, but I’ve always liked shoveling snow. During [Saturday's blizzard], I shoveled out my car, some friends' cars ... and some other places. I actually put an ad up on Craigslist offering free snow shoveling services to those who were unable to do it themselves but didn't get any responses. So [on Tuesday], I just grabbed my shovel and found a car that was deeply buried and figured I would just shovel it out, which I did.

When I got home, I realized that maybe the person might want to know who shoveled out their car so I quickly typed up the first note, and put it on the car. I added the part about Mighty Mutts because I have been volunteering there for a long time and I’m always trying to find new ways to help them out.

On the use of a typewriter:

I used a typewriter because my printer doesn’t work, I have bad penmanship, and I like my typewriter.

On continuing the service:

So far I think I have done four cars with this type of note, and will try to do a couple more before alternate-side parking starts again.

I didn’t put much thought into this before doing it. But while doing it I started thinking it would be a good fundraising project for Mighty Mutts or any charity. People could sign up to have their cars shoveled and volunteers could go shovel to help raise money. The beginning of the year is always difficult because it is harder to raise money and people have already donated to charities during the holidays, but the operating expenses don’t change.

Shoveling snow is one of the only things I get to do that has a clear start and a clear finish, it is exercise, and I like to think it’s a good way to make someone’s day. Whether or not they want to donate is irrelevant — it’s a simple way to do something nice.

We also mentioned that the post attracted a lot of comments here and on Facebook. Overall, people were impressed and thought it was a nice act of random kindness. However, there was a contingent who found this note and gesture guilt-inducing and passive-aggressive.

We asked the resident about this.

"I guess I could understand how it could be seen as passive-aggressive. Maybe I worded the notes improperly, but that was never an intention. I really don’t want anyone to feel obligated to pay for something they didn’t ask for. I would rather they just enjoy having their car shoveled out without having to even think about it."

Previously on EV Grieve:
There is an anonymous, animal-loving snow shoveler in the East Village
Posted by Grieve at 4:25 AM 21 comments:

There is an anonymous, animal-loving snow shoveler in the East Village

A tipster sends along this note ... from a car on East Seventh Street between Avenue A and Avenue B...

Per the note, written on a typewriter:

Your car was shoveled out of the snow for FREE on the evening of Tuesday, January 2016.

If you would like to show your gratitude you could make a small donation to Mighty Mutts Animal Rescue...

If not, that is fine and enjoy the free shoveling.

Updated 1/28
Find an interview with the snow shoveler here
Posted by Grieve at 12:00 PM 19 comments: 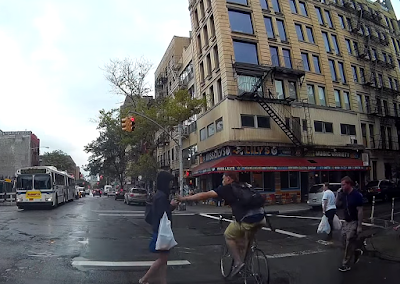 An EVG reader shared this Dashcam video with us from late yesterday afternoon around 5:30 … when a woman walking west on Seventh Street at Avenue A has her iPhone snatched by a cyclist (it's at the 24-second mark)… following in hot pursuit is a well-dressed man on a Citi Bike…

Sadly, we don't know the outcome… the woman is last seen stopping on A at East Fifth Street after running down the Avenue…

H/T Brian Cohen for passing along his friend's video… posted with permission…
Posted by Grieve at 7:23 PM 32 comments: 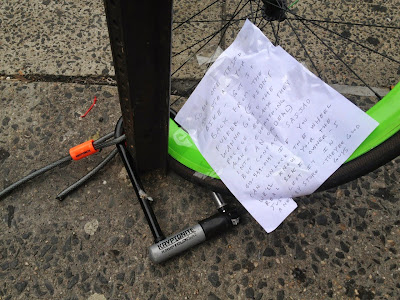 Based only on anecdotal evidence, there seems to be more bike thefts around the neighborhood.

Here's a bike — described as an "attention-getting neon green and yellow" — that almost became a statistic.

EVG reader Randy Kato shared this note from East Second Street and Avenue A … attached to bike wheel still locked in place — without the rest of the bike.

"Some one tried to steal your bike — got it back from the fucker — (I didn't wanna go to the police because they make everything into an ordeal) … If you can unlock the wheel we'll know your the real bike owner — I left just left it in a nearby store — They're good guys."

How a fruit vendor helped save a bike on First Avenue

Dave on 7th shared this anecdote from yesterday... the incident occurred on First Avenue just north of 14th Street... A DOT crew removed a street sign. A bicycle happened to be attached to the sign. The crew was ready to just leave the bike chained to itself on the sidewalk.

However! A fruit vendor down the block intervened and convinced the crew to reattach the bike to a lamp post near his cart. 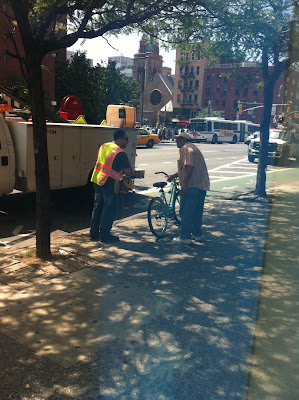 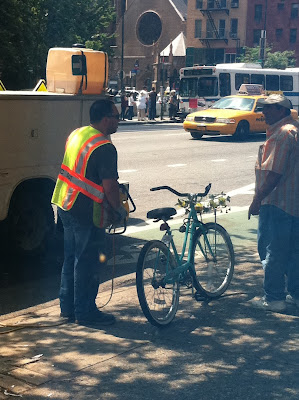 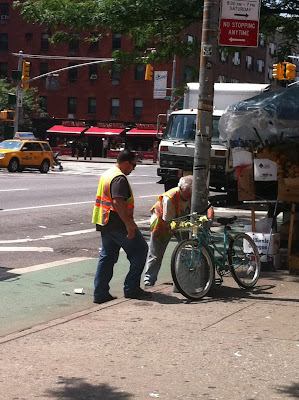 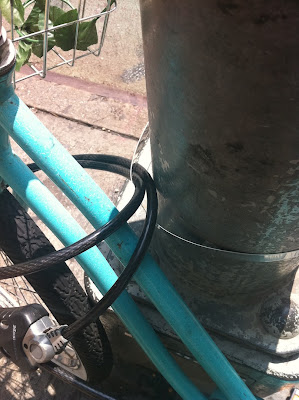