Comptroller's office: Park bathrooms in the East Village and LES are the worst in the city 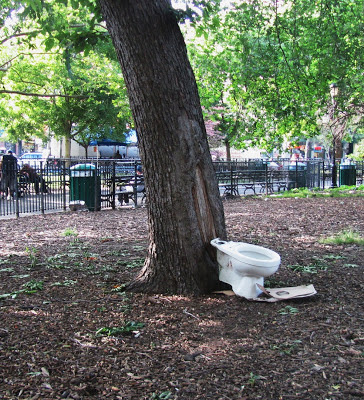 [Photo from 2012 in Tompkins Square Park by Bobby Williams]

A report issued by NYC Comptroller Scott Stringer's office late last week found that the city's 1,428 park bathrooms are — paraphrasing — pretty shitty for a variety of reasons, especially apparent if you've ever been inside the ones in Tompkins Square Park.

Anyway, let's get right to that report:

[M]any NYC Parks comfort stations have fallen into disrepair, subject to poor maintenance and hazardous conditions. Among the 1,428 NYC Parks bathrooms, nearly 400 sinks, toilets, walls, ceilings, changing tables, and other features were damaged or missing during their latest inspection. Over 50 “hazards” were identified that presented the chance of moderate to debilitating injury. And, in nine Community Districts, more than a quarter of NYC Parks bathrooms were deemed “unacceptable.”

[F]ar too many NYC Parks bathrooms remain in unseemly condition; repelling children, families, seniors, and everyday New Yorkers, rather than providing relief. In total, 100 bathrooms across the City were found to be in “unacceptable” condition during their most recent inspection. This included 15 percent of NYC Parks bathrooms in Manhattan and 12 percent in Brooklyn ...


The report breaks down the city into community districts, and leading the pack with the largest share of “unacceptable” park bathrooms is District 3 — Chinatown/the Lower East Side (including the East Village), where 40 percent of the facilities were found to be unacceptable...

... due to a) multiple features being unsatisfactory, b) one feature having a serious safety hazard, or c) the playground having a failed cleanliness rating.

Meanwhile, a spokesperson for the Parks Department disputed Stringer's findings. Gothamist has the story:

"This administration has invested in the construction and reconstruction of more than 15% of our park comfort stations—27 have been completed, and 76 are active capital projects. Since 2015, we have worked to standardize their design and each facility includes changing tables — in the men’s and women’s restrooms.

"Through our robust PIP inspection program, and park management and staff oversight, we closely monitor the conditions of each of our 690 comfort stations. Our reporting shows that they are open on average 94% of the time (FY16, FY17 and FY18) during the season." 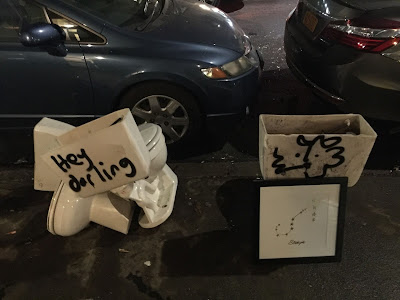 Photo on 10th Street tonight by EVG regular Daniel...
Posted by Grieve at 8:29 PM No comments: 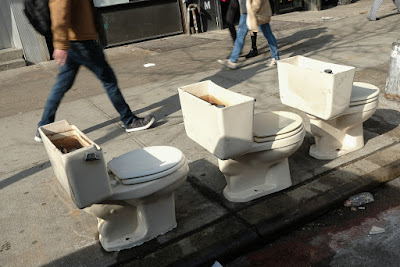 Photo this afternoon on Second Avenue between Seventh Street and St. Mark's Place by Derek Berg...
Posted by Grieve at 3:59 PM No comments: 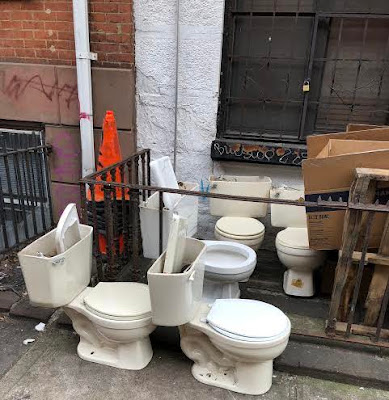 When the meeting came to order on Ninth Street earlier today... photo via Steven...
Posted by Grieve at 9:43 PM 1 comment:

Email ThisBlogThis!Share to TwitterShare to FacebookShare to Pinterest
Labels: toilets 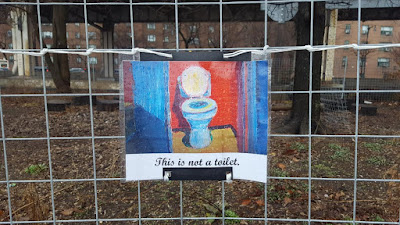 Goggla shares this photo today from East River Park ... art doubling as an Urban Etiquette Sign (or the other way around).
Posted by Grieve at 4:34 PM 4 comments: 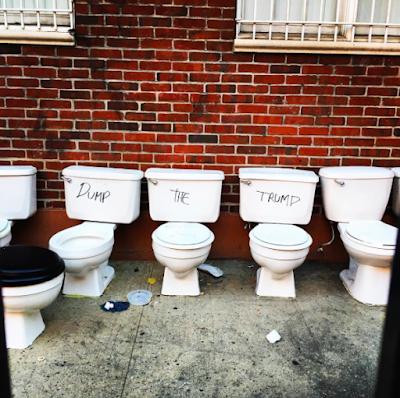 Photo from yesterday between Avenue A and Avenue B by @mcinthenyc
Posted by Grieve at 10:00 AM 6 comments: 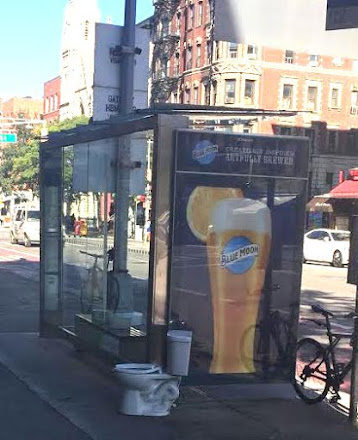 The toilet arrived yesterday morning on Second Avenue between Fifth Street and Sixth Street... delighting the children as only a discarded toilet can... 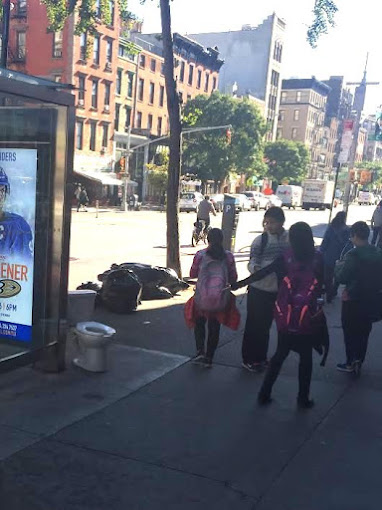 ...and by today, there were additions... 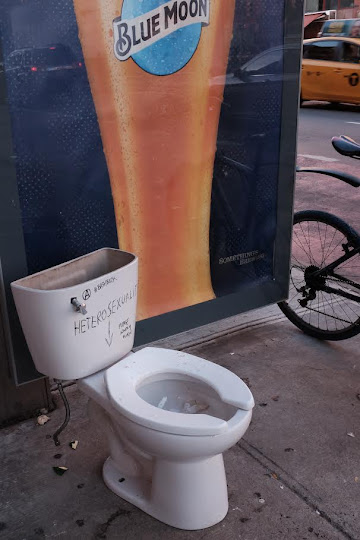 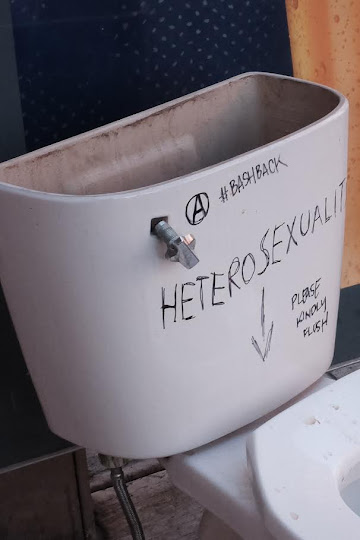 Email ThisBlogThis!Share to TwitterShare to FacebookShare to Pinterest
Labels: toilets 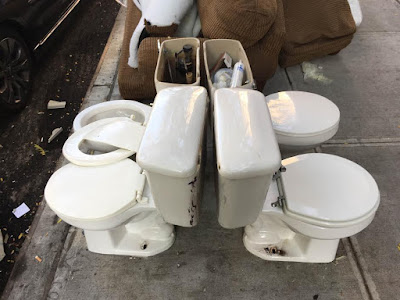 Third Street near Avenue A.

Unless this is some new public art. (In that case, thank you Amanda Burden-Christ!)
Posted by Grieve at 8:31 AM 4 comments: 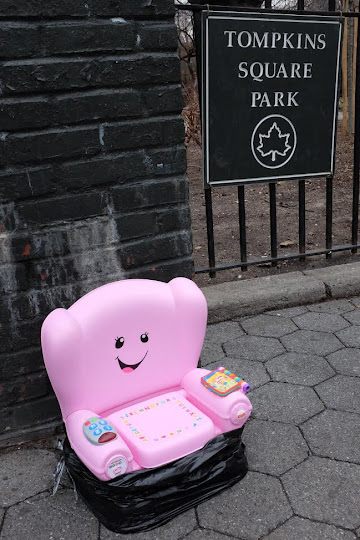 The toilets are currently in beta testing.

Eventually, each toilet will include free one-gigabyte WiFi, though individual toilet-users are more likely to see upload and download speeds closer to 300 megabits per second. This is still much faster than most cellular or landline Internet connections in the United States. Range can theoretically extend up to 400 feet, as long as there are no obstacles in the way, such as NYPD Patrol Towers. (Also, toilet-goers worried about security can get a key for an encrypted connection, although this requires additional steps.)

Other features include free VoIP calls through Vonage, and a dedicated button for calling 911. Maintenance costs should be offset by two 5-inch displays showing ads and public service announcements.
Posted by Grieve at 1:00 PM 18 comments: 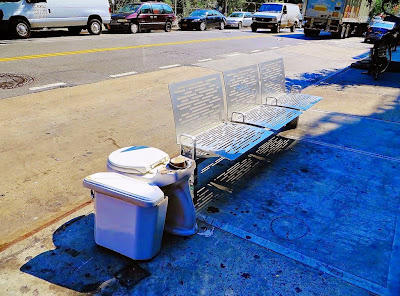 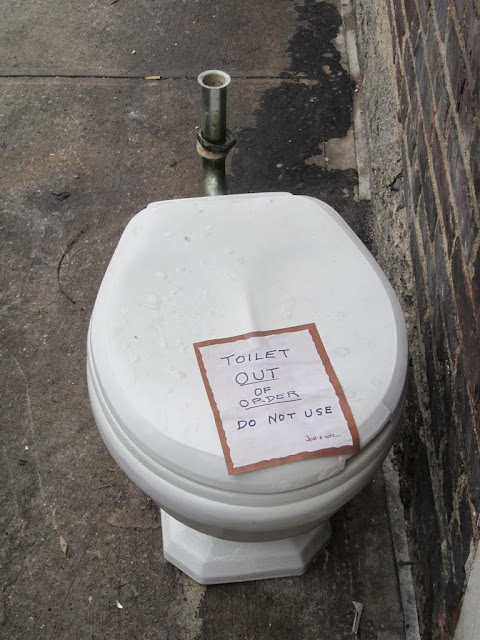 Spotted along East Third Street.
Posted by Grieve at 10:23 AM 3 comments: 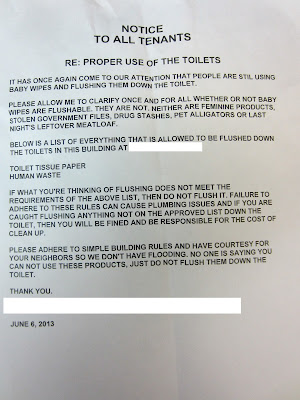 A reader shared this letter that the super dropped off over the weekend... seems as if residents in this building or using the toilets to flush stuff other than [censored] or, as some people crudely call it, [censored].

Other items mentioned in the flyer that should not be flushed: "Stolen government files, drug stashes, pet alligators or last night's leftover meatloaf."

The super/landlord then goes on to list exactly what can be flushed. "If what you're thinking of flushing does not meet the requirements of the above list, then do not flush it." 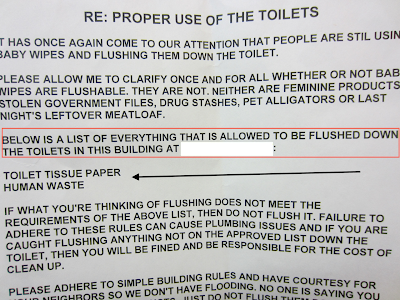 Kidding aside, probably a good reminder for some folks, like the ones I heard who discard their kitty litter via the toilet. Or the remains of the baby deep fryer.

As we wrote last year: Letters addressing what you can and can't flush down your toilet are always so... awkward.

This about sums it up 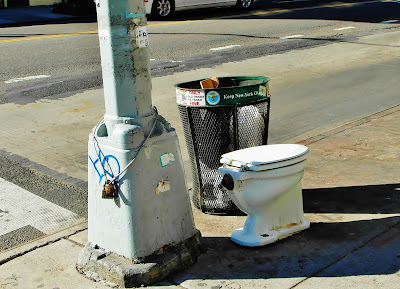 Avenue A and East Third Street today... via Bobby Williams...
Posted by Grieve at 8:03 PM 5 comments: 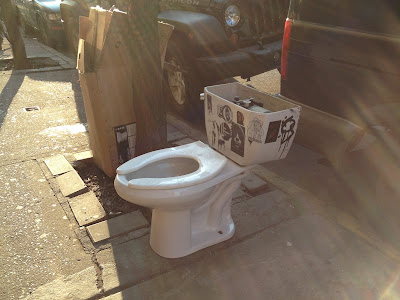 Just passing along some toilet-tank decorating ideas... via EVG reader Mike on Avenue B between Sixth Street and Seventh Street...
Posted by Grieve at 3:13 PM 8 comments: 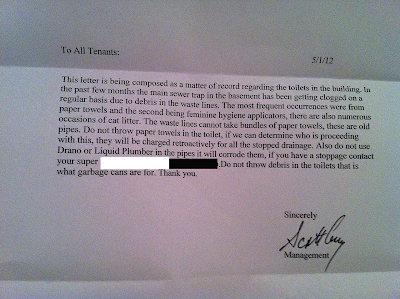 Letters addressing what you can and can't flush down your toilet are always so... awkward. Haven't seen it done well yet. And who dumps cat litter down a toilet? (Wait, don't answer that...)

Via Shawn Chittle.
Posted by Grieve at 6:33 AM 6 comments: 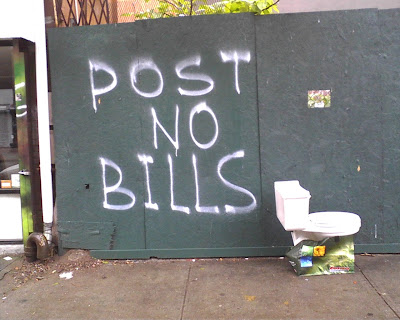 Spacious loft with separate bathroom for rent on Avenue A 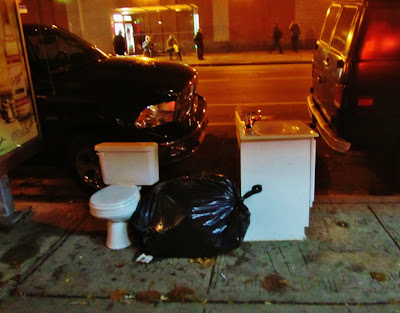 Between Fifth Street and Sixth Street tonight. By Bobby Williams.
Posted by Grieve at 11:17 PM 4 comments:

Email ThisBlogThis!Share to TwitterShare to FacebookShare to Pinterest
Labels: Avenue A, this joke never gets old, toilets

Toilet abandoned merely for having a cracked seat

East Third Street near Avenue A... 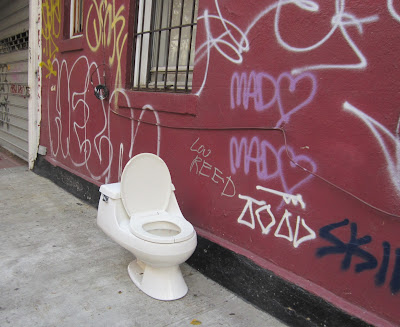 Couldn't this have been rehabbed and put back into use...? 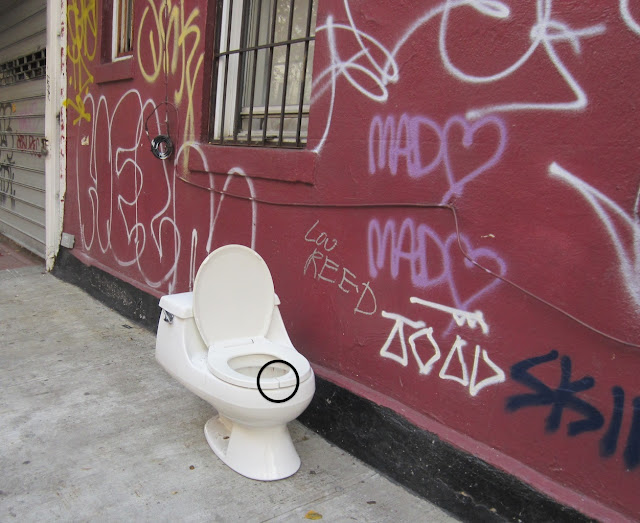 Or else turned into a decorative planter or glassware for a specialty cocktail...?
Posted by Grieve at 11:03 AM 7 comments: 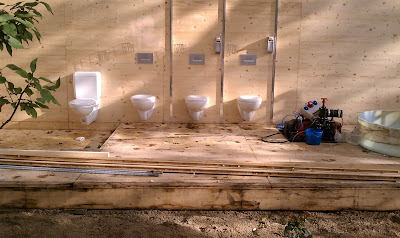 Photo this morning via EV Grieve reader Steve Carter... and why not just leave them for the weekend (and Thursday night and...) party crowd?
Posted by Grieve at 9:43 AM 9 comments:

What do you think of the new outdoor toilet in Tompkins Square Park? 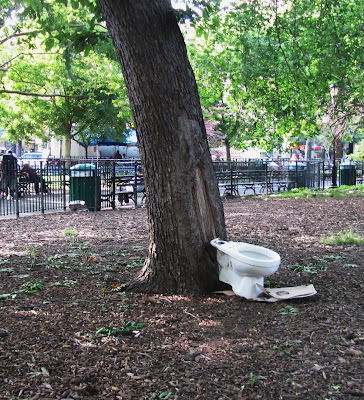 Photo by Bobby Williams.
Posted by Grieve at 11:45 AM 9 comments: