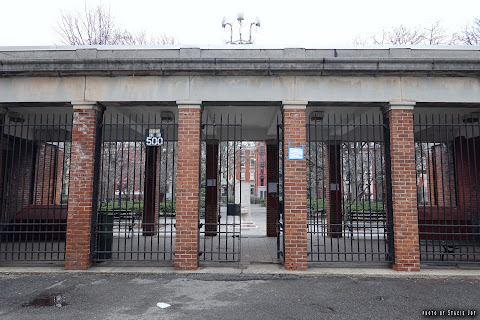 Photos and reporting by Stacie Joy
The area of Tompkins Square Park behind the fieldhouse/office is once again open to the public — for a limited time each day. 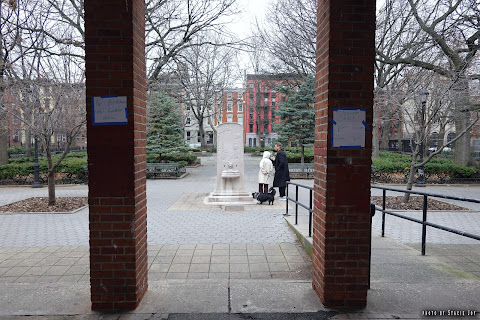 Starting last week, Parkgoers can access this space — dubbed the Slocum area as it includes the Slocum Memorial Fountain — from 10 a.m. to 3 p.m. daily. 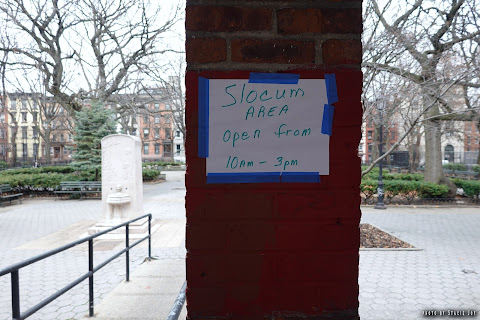 As we've been reporting, the locks arrived here on Nov. 8. There wasn't any signage to explain why this part of the public park was closed to the public.
Parks officials later told us in later November that a malfunctioning boiler and a broken pipe in the basement of the fieldhouse are to blame.
Meanwhile, the area reopened for a day or two in early December before the locks returned.
We're told that Parks employees have submitted requests to have the broken pipe and boiler repaired. This is impacting Park employees, who are working in a building without heat and water, and for Parkgoers, as the public restrooms remain out of service. 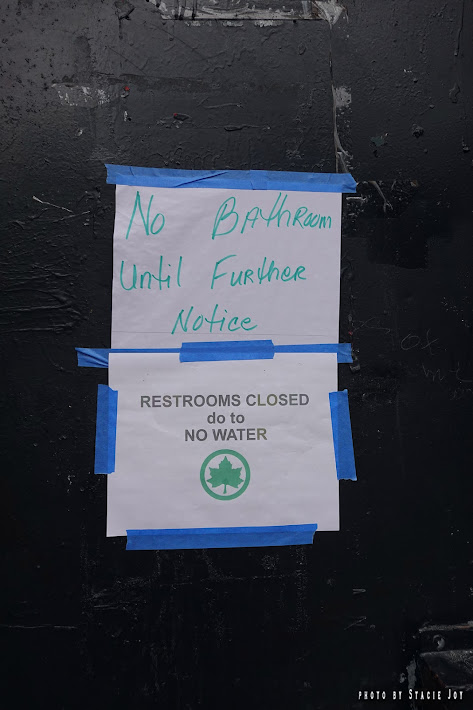 A Park regular has been keeping tabs on the lack of activity here, as seen in the note (since removed) earlier this month... 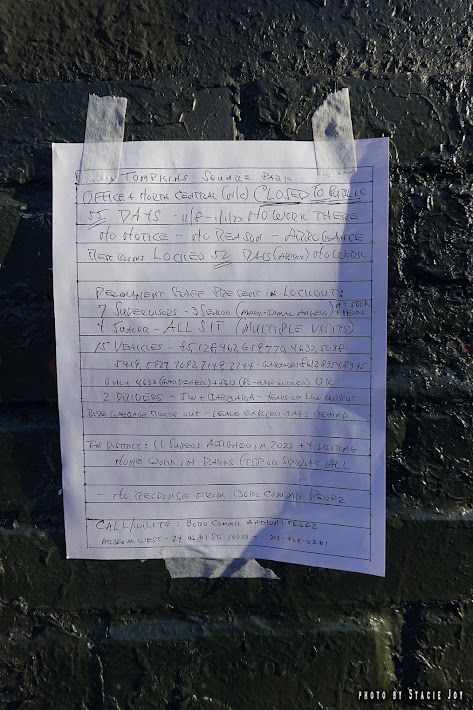 Perhaps the Parks Department is just waiting ... as they are expected to rebuild the fieldhouse. According to the Parks Department website, the city has been awarded the contract to a contractor ... and is awaiting registration via the Comptroller's Office.
Once construction starts, work is expected to take 12-18 months, per the Parks Department.
Meanwhile, tomorrow (Jan. 12) night, Community Board 3's Parks, Recreation, Waterfront, & Resiliency Committee will hear an item of interest (fifth on the agenda): "Clarification of Tompkins Square Park closing time." Find the registration link for the Zoom meeting here.
Also on the agenda (2nd item): A Parks Manager Update.
Posted by Grieve at 5:30 AM

Ummm can someone correct the spelling error, the word is “due” not “do”. Or is the a grammar error? Lol

It's driving me nuts. I need a sharpie...

Thanks for posting a link to the meeting. I have signed up and now will perhaps find out the name of the Tompkins Park manager. No one seems to know, not even the park employees!

They’ll never rebuild the fieldhouse because the gov is always slashing the budget first for parks.

No, not for parks. Just for this one.
Go to any other park in the city; staff driving around in brand new electric service vehicles; actually performing actual work
TSP is a shit hole. And it's shit hole because the EV community allows it to be. No other park communities stand for this kind of mistreatment. EV shrugs.

Who can we contact to register complaints about this? I can’t quite read the note. I was thinking about calling 311 regularly.

I don't believe the bathrooms are inoperable because of no water. They want to keep the homeless from having a park to hang out in and a bathroom to use. Despicable the way people with no homes are treated in NYC.

I missed the first part of the CB3 meeting, but they voted to close the park at midnight since that's how it used to be. I don't think there was any discussion of this locked area, unless I missed it. There seemed to be some blame going to the NYPD who is responsible for locking the outer gates and they haven't been doing that for what ever reason.

It might also be worth noting I've been seeing parks police cars in TSP regularly, but they do nothing, just park under the Krishna tree as people let their dogs dig up the plants in the gardens.

You will want to contact Dan Goldman, anon 5:33. Park is in the new NY10. Maloney's term is now over. I hope this is just a reminder, and that you voted and knew this. But for anyone who aspires to start being politically active at a Federal level, the park and it's environs are now in US Congressional District NY10.